How do I animate the position of my character's hair randomly?

I'm trying to create an effect where a character's hair moves randomly (using hair particles) and in a stuttering fashion. The closest I have come is using force field settings with a turbulent field, but the hair particles' movement amplitude isn't large enough. The animation of these particles also only lasts 100 frames, after which the hair returns to its stiff spawn position.

Ideally, I would like to use the hair seed to essentially teleport the hair around the body. I can keyframe the seed, and changing the seed changes the hair's position, but when I play it back the hair particles are stationary.

How can I animate the position of my character's hair randomly?

For reference, the effect I'm going for is similar to this:

Adding a force field works with the correct settings.

I use a turbulence field with a large strength and small size. I added a #frame driver to each location and rotation channel, to make it change transformations frame by frame.

In the hair dynamics, make sure to set mass, stiffness and damping to low values. Since my low stiffness value would cause the particles to completely loose their shape, I increased the goal weight. 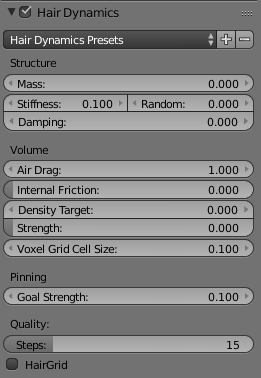 Not the answer you're looking for? Browse other questions tagged animation particles hair or ask your own question.