Is it possible to parent a grease pencil layer to a particular object, so the grease pencil can be used to annotate future details of that object.

A workaround is to use a texture for every placeholder polygon, but it seems to be overkill for this particular usecase.

I want annotations to be visible when another object is selected too. Also, some objects are directional, so I need to keep track of the "front" face too, similar to what you get for "Things" in DoomBuilder.

As of Blender 2.78 you can parent Grease pencil strokes to objects or armatures which will make them follow transformations of the parent.

If you want to preview strokes independant on the object selection you should create Grease Pencil layer of the Scene type: 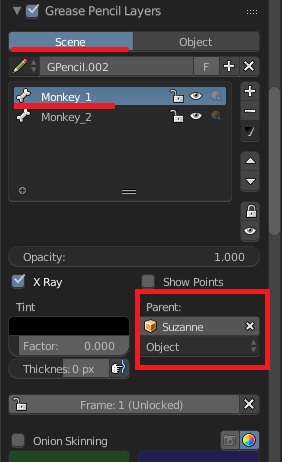 In the top of the menu choose Scene option and create a new layer. Rename it if need be, then choose which object you'd like to parent it to (it isn't important whether strokes are already drawn or not).

As parenting works on Layer level you need as many layers as there are different annotations you'd like to move separately (2 in the example above). So create several layers and choose desired parent in the Parent drop-down as shown above.

To have different colors create several palettes, each for desired color. 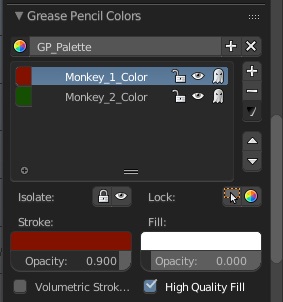 If you don't want strokes to be visible through the objects uncheck X-Ray in the Layer settings. After that strokes might be needed to be moved out a bit: 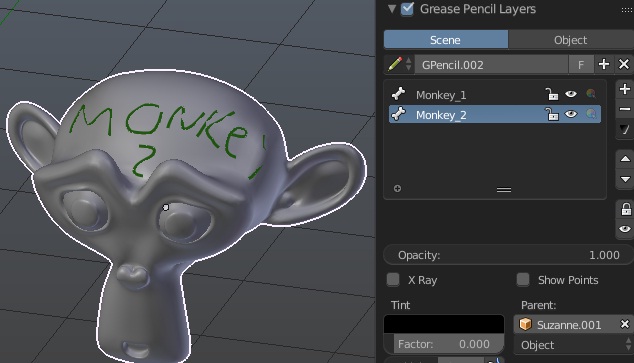 One way to stick them back to surface is to use Reproject Strokes tool available in version 2.78+. Orient the viewport roughly as it was when strokes were drawn (proejcting will be done according to the viewpoint orientation). Then in the Edit Strokes mode (note, not Edit mode) find the tool on the Toolshelf and choose Surface to project strokes back.

Not the answer you're looking for? Browse other questions tagged transforms parent grease-pencil or ask your own question.