I am stumbling my with through a project using blender. What I'm trying to do right now is have my Scene (which I've added to the Video Sequence Editor, along with a video clip) to be displayed above the video.

So far, so good. But now I want to get fancy. My Scene basically consists of silhouettes. Because sometimes the video is black or very dark, I want to put a glow around the whole rendered scene (i.e. all the non-transparent parts).

I tried using the Glow effect strip on my scene, but that seemed to wipe out the transparency of the scene -- the video stopped showing through. I might be missing some easy way to make this approach work.

But now I'm trying to put together some Nodes to accomplish this effect. And it's really almost working, it seems like... 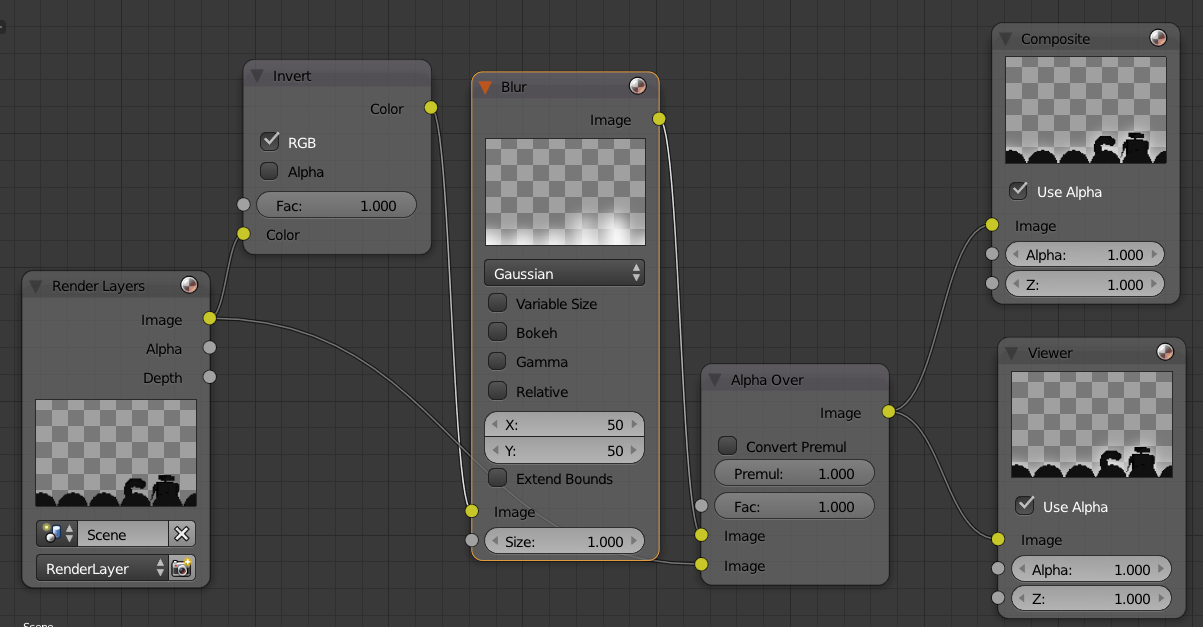 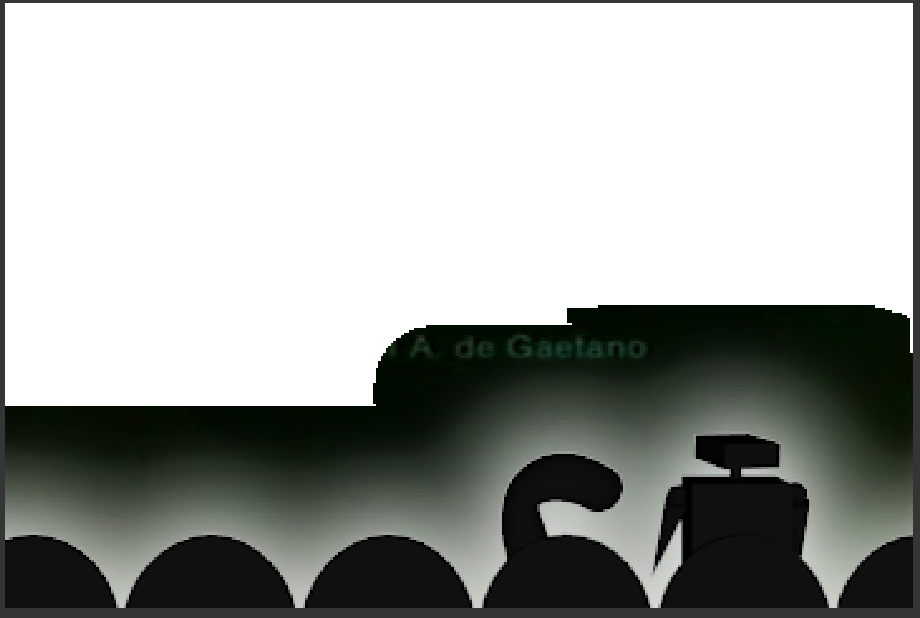 I'm a newbie. I've been feeling around in the dark to try to make this work. Any help would be greatly appreciated!

The only way I could do it was to produce two separate movies/images. One for the black obects, the other for the white objects which are blurred when mixed in the compositor.

Here are the nodes... 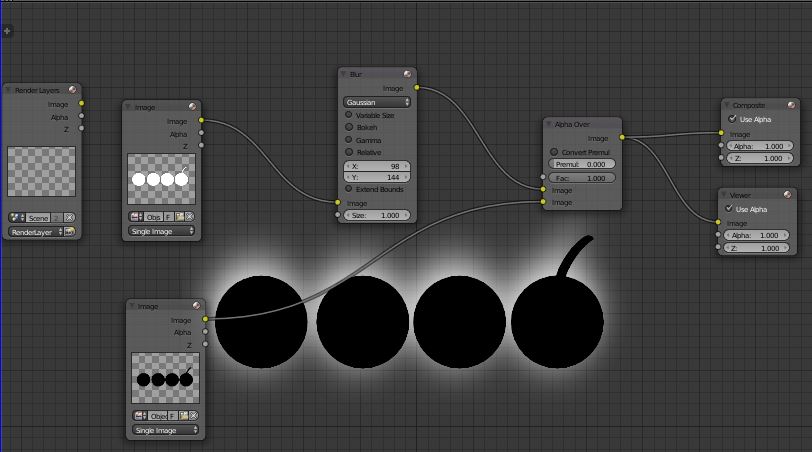 One thing to check is your Render output; Open the "Post Processing" tab, make sure PNG format is selected, and also set it's RGBA box to on. (highlited) to ensure the Alpha Layer is included in the render.

Note that a separate folder for the output png files, (one for each frame) is a good idea.

The rendered pic I got was as we see in the backdrop above, complete with an alpha layer and ready to overlay another pic or movie as required.

If you're stuck I can attach the Blend file...

ADDENDUM: Here's how my output looks when overlaying an image or movie - 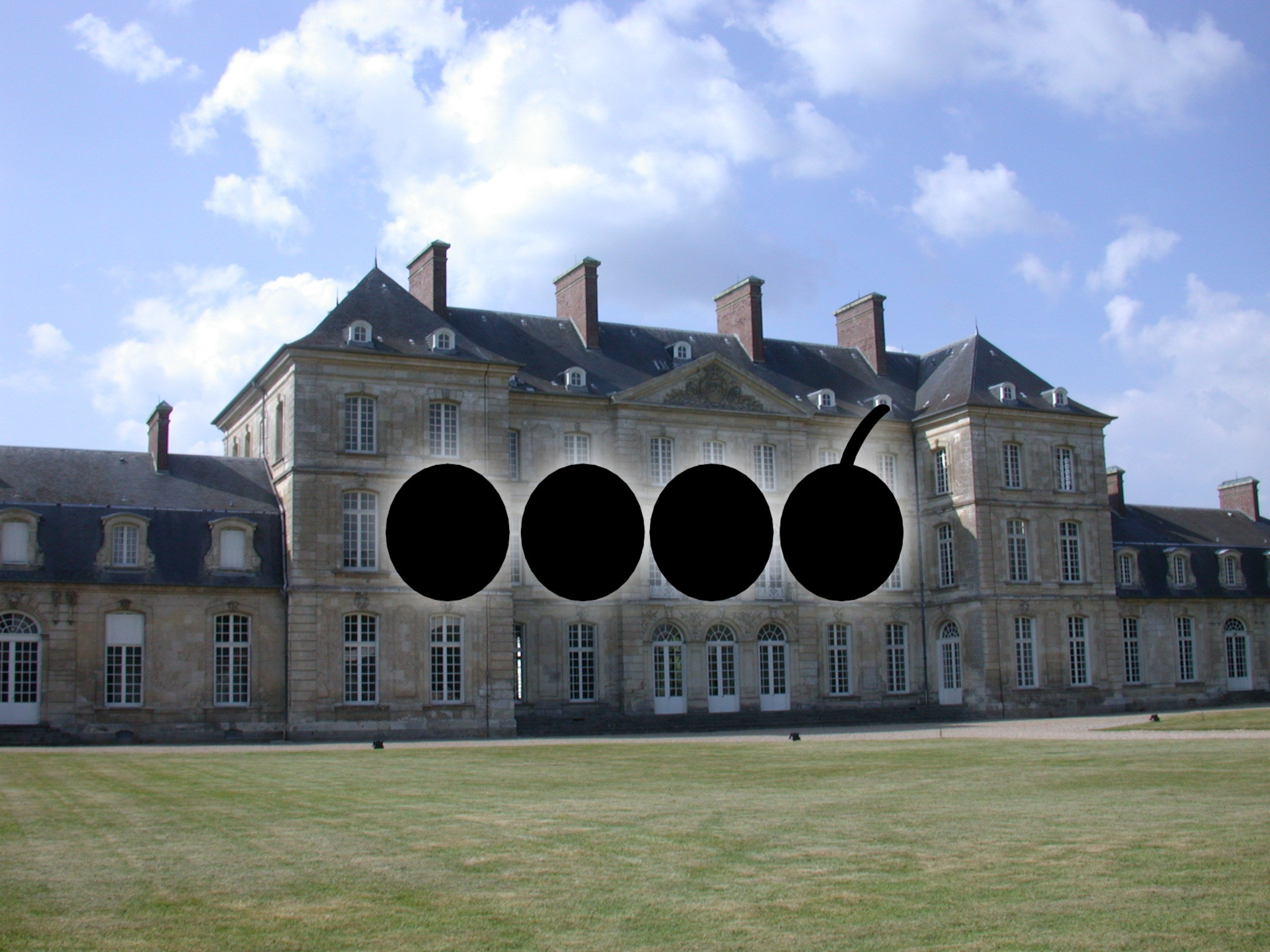 The mixing/scaling can also be done in Blender's 3D window. I tried that and the result was the same.

The Blend file follows and will open up in the 3D window which holds instructions on how to recover the two images needed for the compositor.

I just couldn't give up on the method and after some more tinkering I stumbled on a solution. I wish I could say I understand the solution, but I don't really.

I added an "Alpha Convert" node just before the final output:

I was tinkering and changed the Premul value in the Alpha Over node, but it didn't seem to make a difference. Neither did what mode the Alpha Convert node used (Straight -> Premul or vice versa).

P.S. Thank you to Edgel3D for putting in the time to help me and put together an example for me and everything. I would have used that method if I hadn't gotten this to work.

Not the answer you're looking for? Browse other questions tagged node-editor video-sequence-editor transparency or ask your own question.