I'm trying to find out how to create a procedural material that creates an animated diffuse ripple around any intersection or 'edge'.

e.g. cube lands on water surface, edge of water touching the side of a pot, etc.

On the top right of the picture below is a quick breakdown of a few of the elements.

I'm not a math wizard, so I kinda followed a thread and got this node setup:

I hope I understood and got the description for the nodes right. Here's the result:

A few problems come up here.

For problem #1, I'm thinking of using #noise.random() to generate random values which then goes into a sine math node but I have no idea how to make it only affect the edge of the circle.

For problem #2, I believe that I'll have to start over and use a different approach but before I do that, I'm hoping that there's someone here that knows where to go from here.

I did try to tinker with dynamic paint but it doesn't work with fluid sim. It outputs an error saying no UV data is found.

I don't want to ask too much, so if there's a solution just for making the circle 'distort' around the cube over time, that would be good enough. Thanks in advanced.

I did some more experimenting and I got like a 50% success in distorting the circle.

I added 2 cross product nodes and 1 normalize node to screw around with the x y z values before plugging it into the multiply nodes which are now in the 'circles' node group.

The theory: The 'circle' node group draws an infinite amount of n unit lines from the origin of the cube, creating a sphere with a radius of n units. Where the sphere intersects the fluid, a circle of diffuse material appears on the fluid.

To achieve the distortion, a relative IRL suggests that I randomize the radius of the sphere by jumbling up the x y z location data of the cube. It should be able to mess up the radius enough to make a wavy looking circle. I used cross product because it was the one that came close to the desired result.

I wish I could explain this better, but then again, I'm no math wiz.

It looks close but when I render out the animation...

I got electricity instead. Coooooooooool but still not what my project team needs.

Aside from how it looks like electricity, it still doesn't hug around the cube as much as it should and there's very limited controls on how much it spreads out.

I never considered trying out the vertex format but as suggested, I looked deeper into what it does and it works like a charm for problem #2. The setup is shown below. 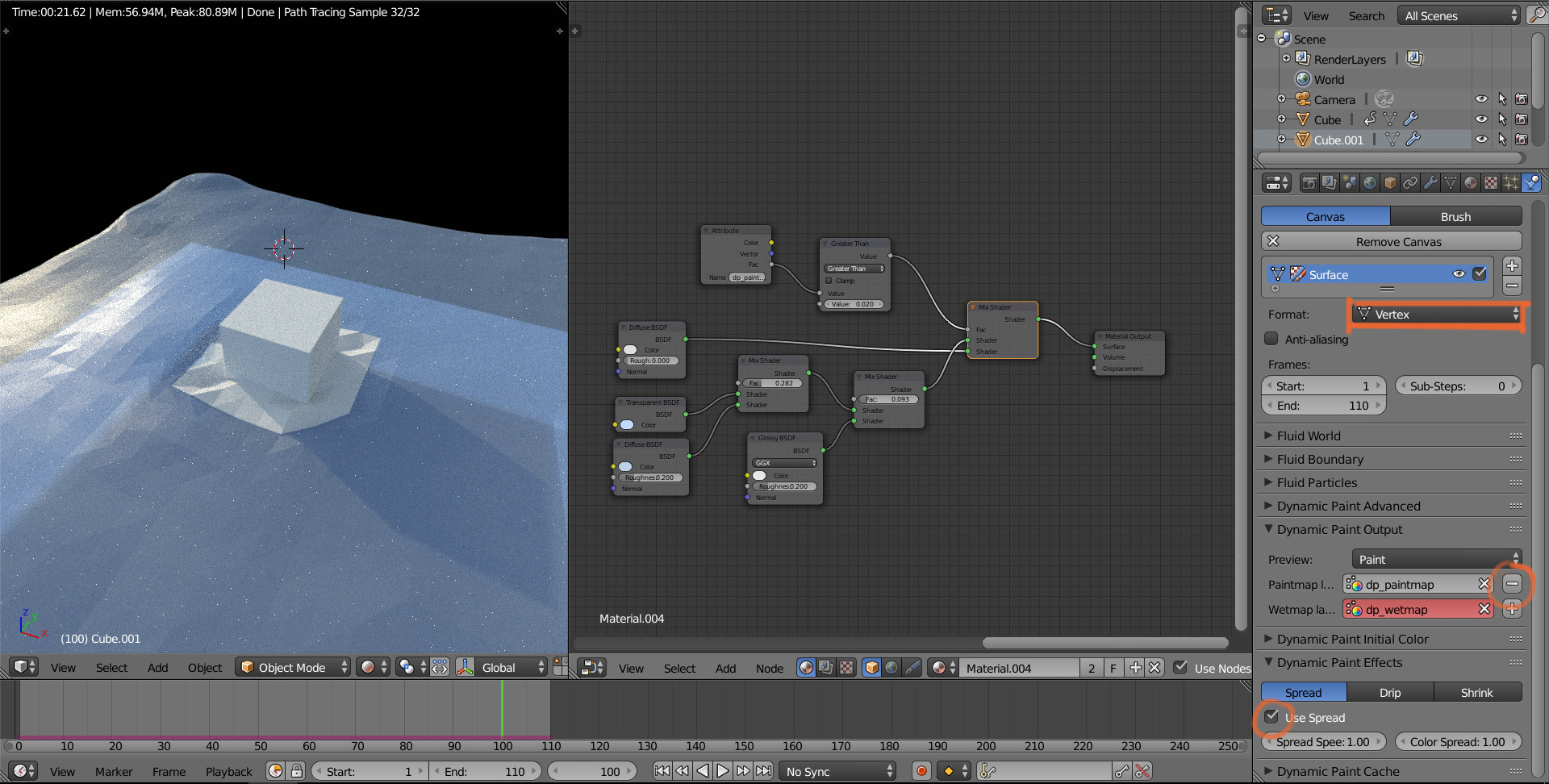 The node setup doesn't look like a nightmare anymore. Thanks, Duarte!

This is still an incomplete answer. I might update this answer as I find out more stuff. Feel free to add on top of this or come up with a better solution altogether.

What's Next: How to make the distortion behave properly (or find something else that behaves properly) and hopefully, apply that on top of the dynamic paint.

16
Can I refer to another object's properties from a Cycles node shader? Drivers? If so, how?