Blender render or camera view clips my object or shows nothing

I am new to blender and 3d modelling. I have tried searching for the answer to no avail.

I'm having a hell of a time positioning the camera. At first it was clipping my object as such (bottom left tire).. 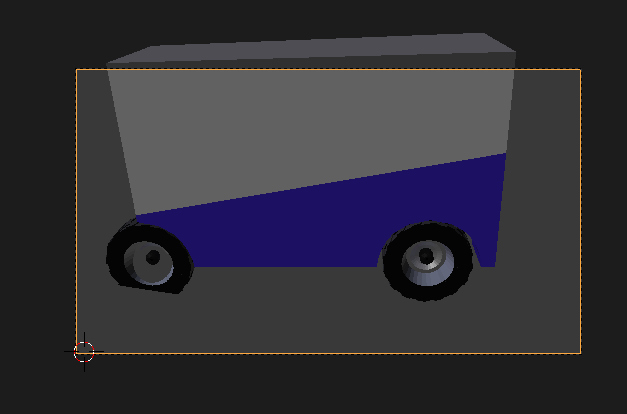 I moved the camera and now I see nothing in the render or the camera view. I have linked my blend file here...

I have moved my camera in a thousand different places with no luck. In a previous project I was able to manipulate the camera and render with no problems. I'd guess I hit a hotkey by accident that messed everything up in my current project.

Ok, so a couple things going on, but they're common mistakes that people make, especially early on (and sometimes later!).

The primary problem is that your object is scaled to gigantic proportions. Select all objects (A) and scale them down (S) to .05. Move everything so that your Zamboni is back in the center of the grid and resting on the grid, just for (optional, just for aesthetics and to keep a reference point).

:edit: I forgot the 2nd part. Though the above will solve your view problem, it would be a good idea to select your Zamboni after you've got it all scaled down, and press Ctrl + A which will apply the current scale as the objects default scale.

In blender there are essentially two scales for a mesh. First, you have it's size according to the mesh (the actual geometry). But when you're not in edit mode, but in object mode (when you press Tab you are toggling between the two modes) and you scale the object, the mesh size, according to Blender, is staying the same. But the object size is getting bigger. A bit tough to understand, maybe, but think of it like this:

You decide to scale it up 2x by going into edit mode, selecting all the vertices, and scaling them up 2x. Blender now sees your cube as 4'x4'x4'.

This is important for many simulation type things, but it can cause problems when your object is so extremely large that Blender doesn't quite know how to display it.

So going back up to the Ctrl+A command and applying the scale, your telling Blender that the size that the object is, is the size that you want to be the default 1x scale.

I hope this is clear, let me know if I can clarify anything for you.

Not the answer you're looking for? Browse other questions tagged rendering 3d-view camera or ask your own question.

30
How do I increase the render distance?