Is there a way to compute vertex density? 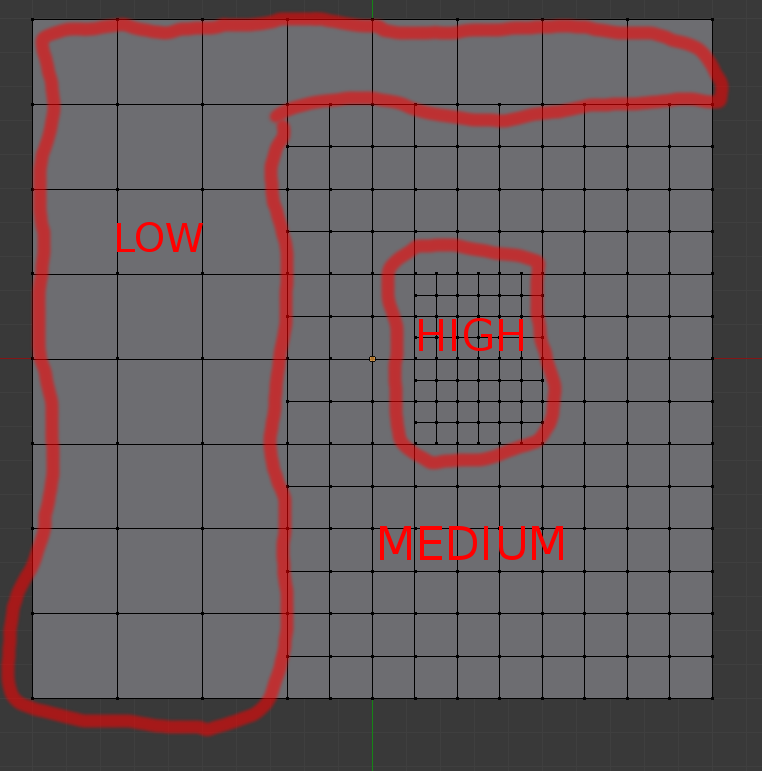 Assuming Cycles, the simplest method is to use the Point Density node. 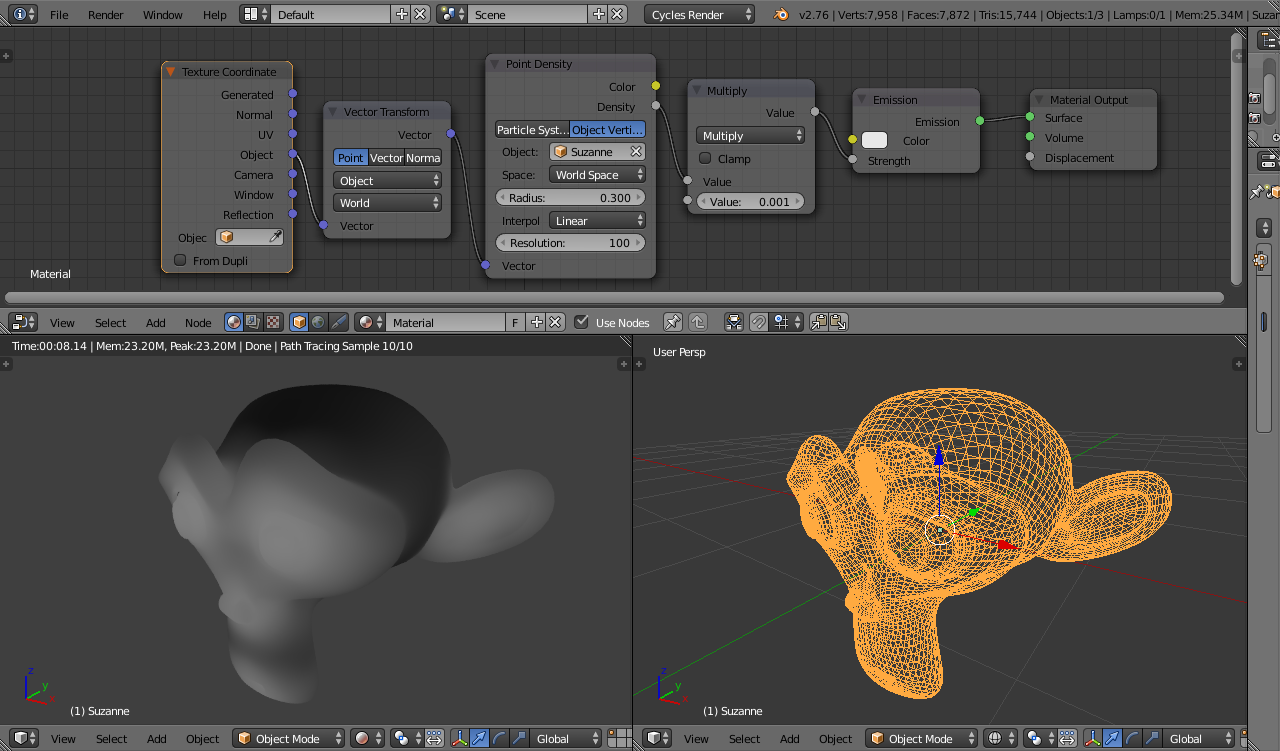 The Point Density texture calculates the distances from a set of points and can be set to either take those points from a Particle system or from mesh vertices. By using Object Vertices and setting the Object to itself, it will provide the density of the vertices of its own mesh. In the above example, the Vector Transform node is used to translate Object coordinates into World coordinates to drive the Point Density. This ensures that the Point Density is in the same location as the mesh.

Adjust the Radius to affect the influence of each vertex (higher values increase the distance at which each vertex will have an effect - effectively smoothing it out further), increase the Resolution if the results are 'blocky' (higher values will be slower to compute) and adjust the Multiply node to scale the result (here I divide by 1000 to bring it within the range 0.0 to 1.0 for the Emission node).

EDIT : Here's an example using the example from the original question. I've adjusted the settings to produce reasonable results without the circular artifacts mentioned by @LukeD. The artifacts are due to the Point Density also providing values between the vertices (rather than LukeD's approach that generates distinct vertex colors). The artifacts can be minimised by adjusting the Point Density properties - Radius, Interpolation, Resolution as shown : 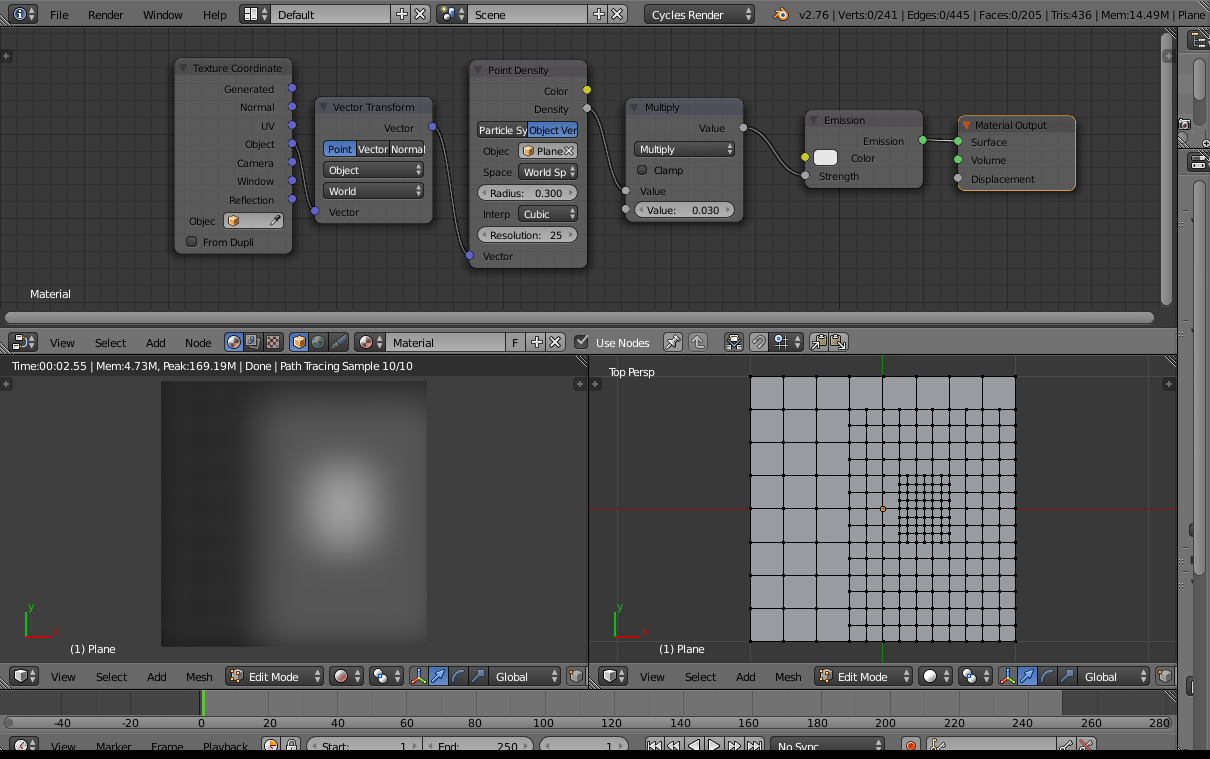 After playing with Weight Tools I was able to achieve desired result even with ngons (more below), also Color Ramp in this example is set to Constant color interpolation.

You can achieve such effect quite easily with newly built in add-on - Tissue.

As an example I've used Suzanne with Sculpted regions (Dynotopo).

Note: I've not tested it much but it seems that it is working best with triangles and not so good with ngons (colors are triangulated). Quads are working pretty ok too. 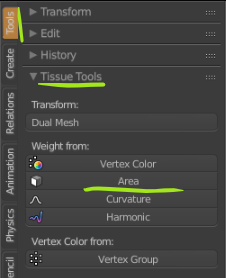 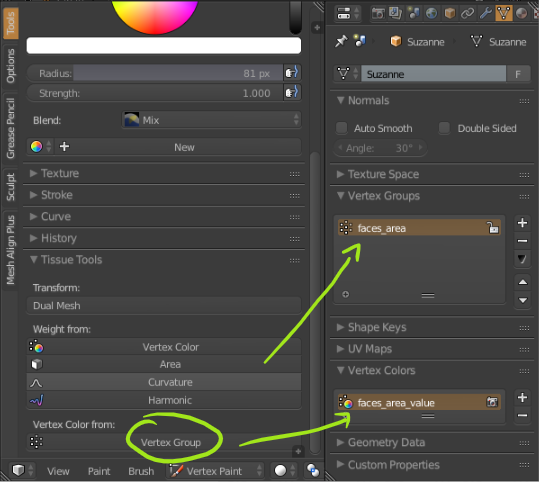 Not the answer you're looking for? Browse other questions tagged mesh vertex-colors or ask your own question.

6
How can I average two meshes together?
1
Does the vertex count of a mesh affect the size of the normal mapit generates?
1
Encoding Vertex Position into Vertex Colors
0
How can I keep vertex color accurate on a voxel model thats been converted to a lower poly model?
0
How to set vertex colors on import
3
Q: Excessive loss of detail when baking normals from High Poly to Low Poly mesh
1
Is there any way to fix the awful topology on curved text?
7
Blender for scientific visualization - Point color interpolation from vertex color data based on distance