Comparing Cycles renders of a glass bowl, I see a color shift and an angle shift when switching between Principled BSDF shader and Glass BSDF (Beckman) shader. 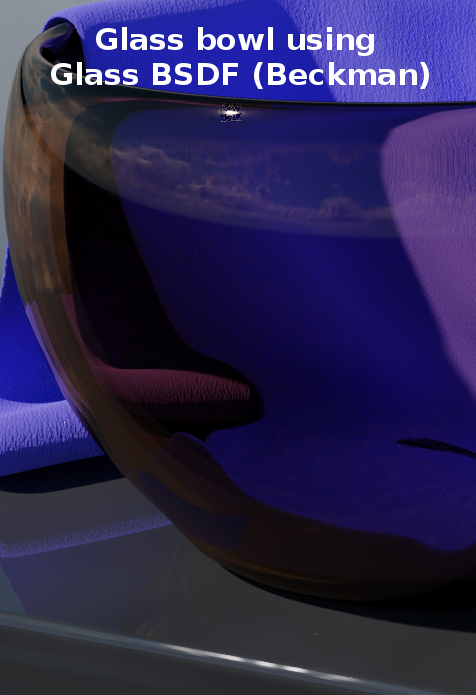 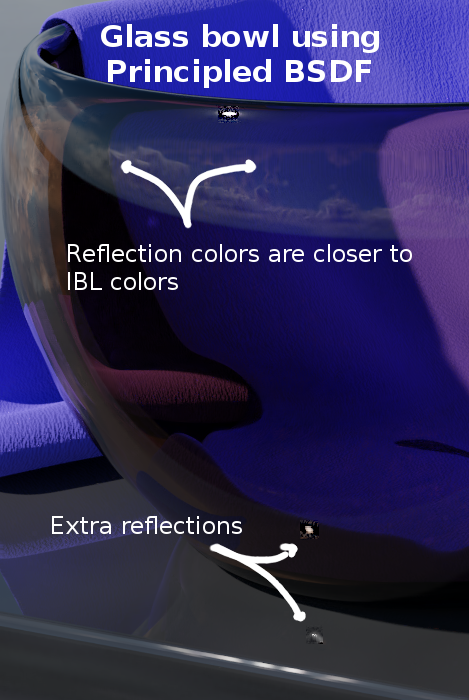 Note: according to Is the Glass BSDF shader in Blender PBR accurate?, the Principled BSDF is more accurate.

The bowl is sitting on a polished slab. I originally used the Glass BSDF shader with color e7c8b0, and otherwise all default options including Beckman model. Originally, there were a pair of undesirable reflections:

I considered these "undesirable" because they were in a location that detracted from the feel I wanted, and because they were surrounded by rectangular artifacts. They looked like mistakes. I eliminated them by moving the bowl closer to the edge of the slab so that the primary reflection was off the edge and thus none of the secondary reflections appeared.

When I switched the shader for the glass bowl from Glass BSDF (Beckman) to Principled BSDF (roughness:0, transmission: 1.0, base color: e7c8b0), it appears that incident angles are calculated differently so the primary reflection is no longer off the edge of the slab and the undesirable secondary reflections have reappeared. The fact that the primary reflection is in a different location is not necessarily a problem in Principled BSDF. I do not know which shader is more accurately modeling angles.

The Glass BSDF looks slightly muddier and browner than I expected based on the color I assigned the glass. The Principled BSDF looks closer to what I expected, and the reflections look cleaner and closer to the colors in the IBL image.

I would be happy to upload the non-cropped images and the blend file, but I am new to Blender and don't have reputation to add that many links to a question. If full images and blend file would be helpful, please suggest a location/path for me to upload them.

The rectangular artifacts around the reflections turned out to be coming from the Denoiser. I really like the Denoiser otherwise.

Browse other questions tagged glass or ask your own question.

2
Is the Glass BSDF shader in Blender PBR accurate?

3
How to control specular/glossyness of glass shader in cycles
0
Imported images no longer reflect on glass or glossy shader
1
Can't see through BSDF principled/glass 2.8
1
Why is volume losing color when hidden behind glass and how do I make it keep its color?
0
Configuring eevee glass reflections
0
Principled BSDF Glass Issue
0
Eevee glass rendering grey