Why do Rigify controls no longer move my figure easily?

Why do the Rigify controls separate from the body parts of my figure and also barely move my figure until I increase the value of the FK / IK Switch setting in Rig Main Properties? I'm finding it's nearly impossible to move the "Legs" of the model even when I move the rig's leg controls -- the rig's control just separates from the leg and barely moves the leg. Previously, though, they moved appropriately with no effort. What have I done to make them not move easily when I move the rig controls?

armature rigging rigify
Share
Improve this question
edited May 3 '14 at 1:33

Blender's built-in addon Rigify provides the user with many "handles" or "controls" used to manipulate the position of mesh parts. Here, all of these handles/controls are shown highlighted: 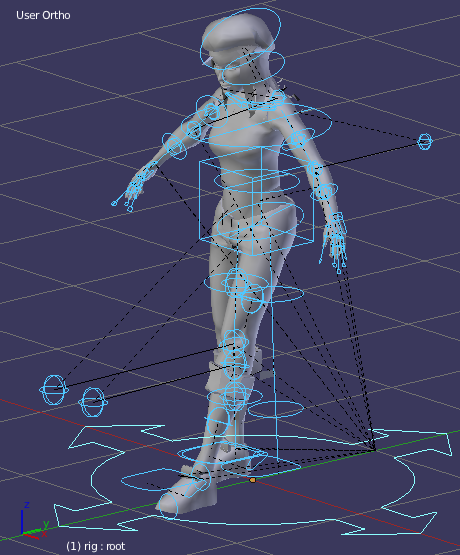 Forward Kinematics
Forward kinematics (FK) is one of the two ways Rigify uses to calculate joint movement of a rigged character. When using FK rigging, any given joint can only affect parts of the skeleton that fall below it on the joint hierarchy. For example, rotating a character's shoulder changes the position of the elbow, wrist, and hand. However, moving the hand only moves parts from there down the joint hierarchy, i.e. only the hand & fingers:

When animating with forward kinematics, the artist typically needs to set the rotation and position of each joint individually -- to achieve a desired pose the animator would work through the joint hierarchy sequentially: root → spine → shoulder → elbow → etc. The final position of a terminating joint (like a knuckle) thus depends on the joint angles of every joint above it in the hierarchy.

Inverse Kinematics
IK rigging is the reverse process from forward kinematics, and is often used as an efficient solution for rigging a character's arms and legs. With an IK rig, the terminating joint is directly placed by the animator, while the joints above it on the hierarchy are automatically interpolated by the software. For example, when moving the hand's IK controls, all unconstrained joints above the hand will be effected:

IK is most appropriate when the animation calls for a terminating joint to be placed very precisely; a character climbing a ladder is a good example. Because the character's hands and feet can be placed directly on the ladder's rungs rather than the animator having to adjust their position joint-by-joint, an IK rig would make the animation process far more efficient. One drawback is that because IK animation uses software interpolation on all the effected joints, there's often quite a bit of cleanup work that must be done precisely positioning specific joints in order to perfect the pose.

Each one of these handles/controls has it's own settings you can see and adjust in the Properties panel. To see these settings, do the following:

So, when you say you are finding "it's nearly impossible to move the "Legs" of the model", that is because the FK / IK (leg parts) handles/controls are set to inappropriate values, so they barely exert any influence on the leg's position when you move them.

The solution is to set a handle/control's FK / IK Switch value to:

Unfortunately, I don't know of any way to do this all at once for all the handles/controls, so you have to do it one at a time. The easiest way to do this is:

Not the answer you're looking for? Browse other questions tagged armature rigging rigify or ask your own question.