Before 2.79 I used a dialectric node setup outlined by Andrew Price for PBR materials. This involved "reflectivity" maps among other maps, which I used, and many PBR texture maps include the reflectivity map. But I see no "reflectivity" value in the new Principled Shader. Where do I plug in this map? I know it's not roughness, because that's its own thing, and I know that the "specular" value probably isn't it, because I've heard multiple people say that that value isn't for when you're trying to do physically accurate shading; that it's not a PBR-related setting. I know there is some other PBR-related value I'm not using that affects reflections, because I plug in roughness and normal maps for very rough, dull materials, and they still look shiny.

Thanks for any help y'all can give!

Actually, it is the specular value input, specular is reflectivity. It's just that in some non PBR setups specular is a way of faking a reflected highlight without calulating actual reflections, and they called it specular. But in the principled shader specular means reflection and that's where you would put the reflection map, also sometimes called a specular map.

Play with the specular value and you'll see you can go from zero reflection to 100% mirror reflection. Roughness is basically your way of dulling down or polishing up the reflectivity, it's like a gloss value

This is from Blender guru.

He shows where is the reflections.

A short explanation of principled: 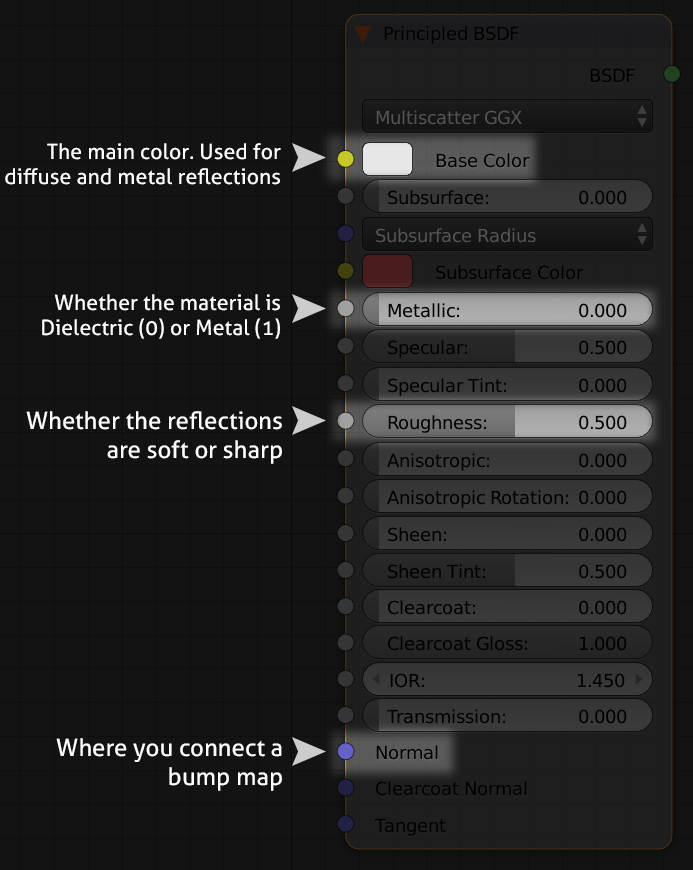 Not the answer you're looking for? Browse other questions tagged cycles-render-engine texturing pbr or ask your own question.