Checked everything, object won't show up in render

I've been modelling a donut with the bells and whistles and run into an issue where the icing of the donut is invisible both in the render and in the rendered viewport. I have a situation of having the base donut with these random floating sprinkles (as the icing is not there).

Here's my file on blend exchange:

I checked that the camera icon was showing like the rest of the objects, checked the layers, the passes etc.

At one point I found an AttributeError in the console talking about "SpaceInfo" and "tree_type" but sadly I could not reproduce the issue to get it to trigger again. I scoured the web to find a similar issue but no one seemed to have what I do, i checked my modifiers on that object to see whether the subsurf was doing something weird but it wasn't, so I leave this up to you. Thanks in advance.

You must check the "Emitter" box in the Render panel of your Particle System settings, otherwise the mesh won't show up, only the particles. 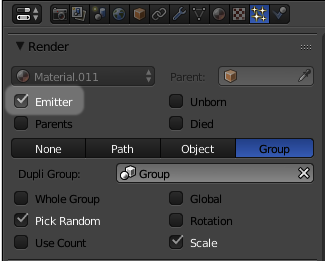 Not the answer you're looking for? Browse other questions tagged cycles-render-engine rendering particles or ask your own question.