How does Blender lights work in Cycles regarding intensity?

Even worst I've constated that the light is stronger when set to quadratic than to constant, but not close to 10 neither.

So the question is how do these lights work in cycles, and are they broken?

Look Mike's answer and my comment below to see why there's nothing to worry about these lights in Cycles.

I offert the bounty to Bertmoog because he provide a good in deep answer, in fact, if it was possible, I would have split the bounty 50/50 with Mike, because he point me to the fact that W/m² aren't the same as pixels values, which was an important part to understand why I haven't got the same values for the source and for the mesured pixel (ray intensity).
Thanks to both of you.

You had already accepted an answer before I posted this, but I didn't believe that the accepted answer fully dealt with or explained the issue at hand.

This statement in the OP is false: "The plane is just a diffuse, R,G,B=1,1,1 which means the material bring will back the light it received with the same intensity."

A diffuse surface by it's very definition "scatters" the photons. So in a realistic light model, it would be impossible for the intensity at one specific angle to equal that of the input intensity even with a perfectly coherent light source. Think of shining a laser on your wall, the "dot" on your wall will never be as intense as the light emitted from the source unless you are aiming it at a perfectly reflective "mirror", for instance. Then the light would be as intense but only at the angle of incidence. See: https://en.wikipedia.org/wiki/Diffuse_reflection

Secondly, light intensity is governed by the Inverse-square law (even for coherent light). This means that the intensity of the light is inversely proportional to the square of the distance. For instance, if you had a light source of intensity 16 at 1 meter, then at 2 meters the intensity would be 4, at 4 meters the intensity would be 1. The reason this is important is that the distance is critical. So even though in your test, the camera, the plane, and the source are all aligned, you may have chosen an arbitrary distance.

To see if this holds true with Cycles, I used your exact setup, but I placed a point lamp at 1 meter and set the intensity until the RGB of the rendered image was (16,16,16) at the center. Then I moved it to 2 meters and measured and finally 4 meters. Cycles actually approximates it pretty well:

Yes, you're correct, Cycles has no atmosphere (apart from volumetrics) so a single light ray has the same intensity at the source as at the surface. Also, with Cycles, it's not "real world"... only a "realistic" simulation, so theoretically, Cycles wants to be mathematically correct. However, there must be many compromises in the software.

Cycles is a probabilistic ray-tracing engine where it uses random path tracing to approximate light in the real world. The problem with simulating light in the real world is that, in a practical sense, you're dealing with numbers approaching infinity. That's why when you increase the number of samples and bounces in a given render, it converges to better approximate real world lighting as the samples/bounces approach infinity.

As you said, there is no 100% Diffuse surface in the real world... but in Cycles there is. And as you said, a light ray doesn't split into two. It's calculated as one path with no branches, up to the specified number of bounces. It's then determined at each point what the brightness level should be based on the intensity of the surface from which it bounced and the reflectance angle with respect to the camera. For Diffuse surfaces, a BRDF function is applied to mathematically approximate the brightness as it would "appear" in the real world.

So when Cycles approximates a Diffuse surface, the intensity of the rendered pixel will be "dimmer" just as it would be in the real world... and from that pixel, Cycles will shoot that same ray in another random direction just as a diffuse surface would in the real world with that same lowered intensity (though it should be noted that Cycles shoots rays from the camera instead of the source).

So why is the light intensity lower? Because you are only seeing a small amount of the actual light rays returning directly to the camera from the point of impact. If you shoot one ray at the diffuse surface, you have a very small chance of it being reflected directly back to the camera... and that chance decreases the farther the camera plane gets from being perpendicular with the angle of incidence.

Here, I've created a cube without a top and given it a Diffuse Shader at (1,1,1) with a Spot lamp (1cm, 1 degree, and no blend) pointed at the bottom of the cube. You can see how much light is reflected in every direction, even though for all practical purposes, this is a unidirectional light source. This is further proven by the fact, that the point of direct impact has the same (pixel) brightness at all angles of incidence (in the hemisphere of reflectivity). 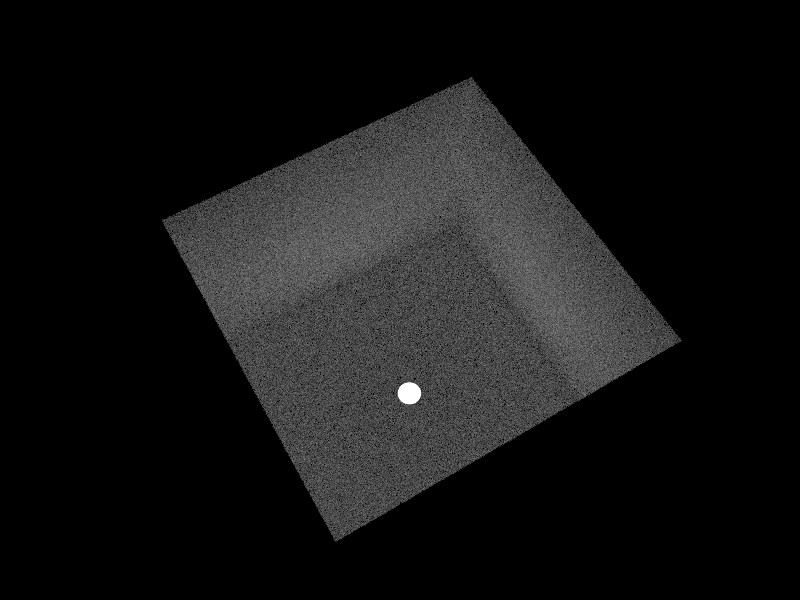 For every ray that isn't directly reflected back to the camera, the direct reflection intensity is decreased and will never equal that of the input intensity. The only way to get the same intensity back to the camera is to use a perfectly reflective (Glossy) shader (since as you said, there's no atmosphere). Of course, even then, there will be discrepancies between the pixel RGB values and the "Strength" of the lamp. They are not correlated 1:1 but they are directly proportional.

There is so much to write but I think this is way too long already. Read also:

What is a BSDF?

Because the energy are specified in watts (over an area when applicable), I don't see any reason why a perfectly diffuse surface should reflect the same numerical RGB value as the lamp's energy.

101
What is a BSDF?
2
EXR output units
2
What units of intensity do Blender's lights use?
0
Laser and mirror experiment doesn't work

1
Why isn't light working?
1
Relation between BI and Cycles lamp energy/emission values?
2
point light strength in cycles renderer
6
Blender 2.8: Where can I find light energy/intensity in Cycles?
2
How to scale a light's size , and strength proportionally with the rest of the scene in Cycles?
3
Cycles: image rendered with zero light, why pixel value is 11 instead of 0?
1
Use graph editor for simulate neons flickering, curves don't match perfectly and negatives values of light absorbe light from the ambient