I added tracks and stuff, but then when I tried to solve motion track, there was a error that said:

Some Data Failed to Reconstruct

and it also said to look into the console for details, which I did. This is what the console said: 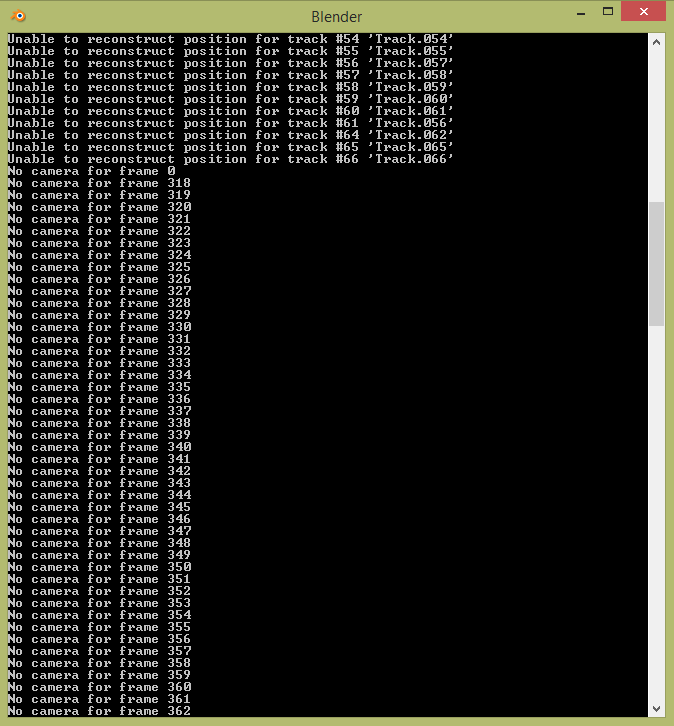 By my understanding, my video is 372 frames long, and Blender is cutting the footage at 318 for some reason. Here is the image of the scene: 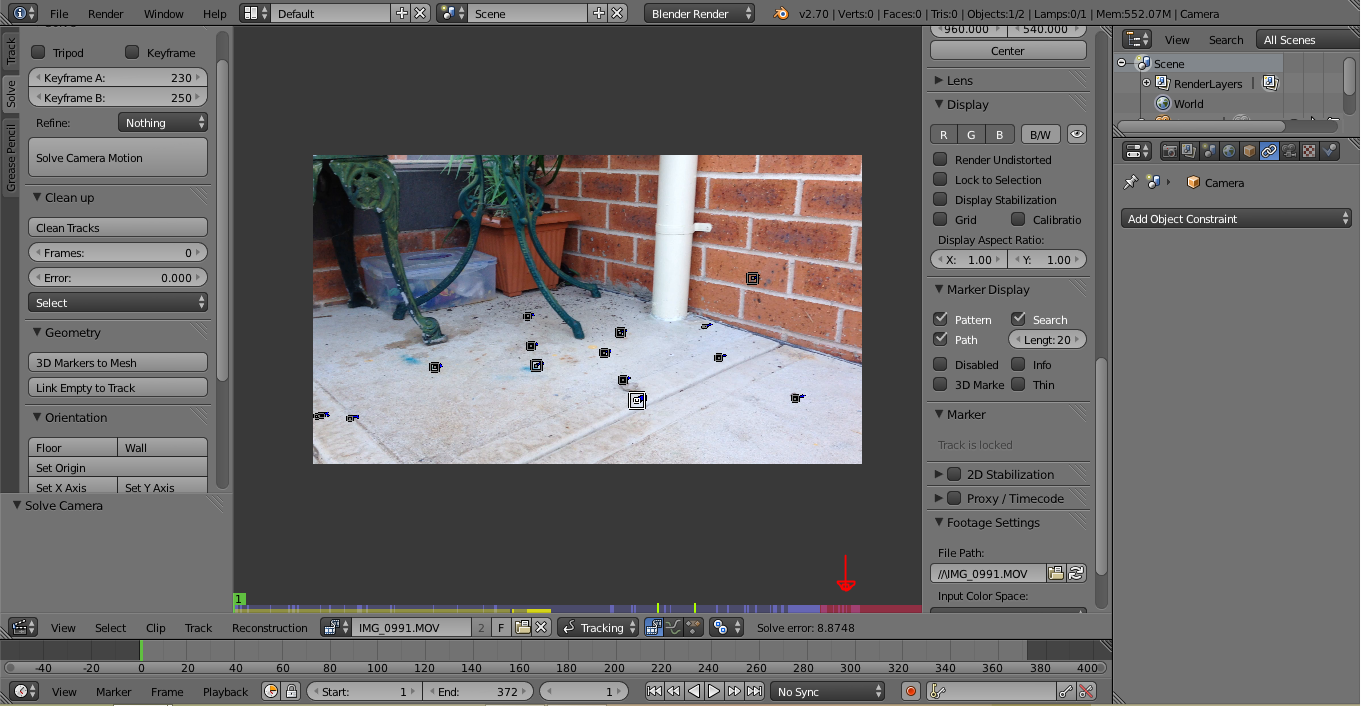 Why? Here are links to my .blend file and also my video. Also the next morning I did a camera solve, but then most of the frames went red.

There are many reasons why your shot fails to track properly making the 3D reconstruction impossible.

1- A successful track is determined primarily by the quality of the shot.

Blurry, distorted images will be much harder to track than clear, sharp ones with unique features in which to anchor the trackers.

In this case, you're getting "rolling shutter distortion" or "jello effect" from the sensor of the camera on your iphone. The movement of the camera makes the image dance all over the frame giving the trackers false information.

-To correct that you would need hold the camera steadier, or undistort the video using other tools like Virtual dub or warp stabilizer on adobe premiere or afterfx.

In parts of the shot the camera moves way too fast. The image has so much motion blur that the trackers no longer have enough features to follow. -solution: Do not move the camera so fast, so the image stays sharp. 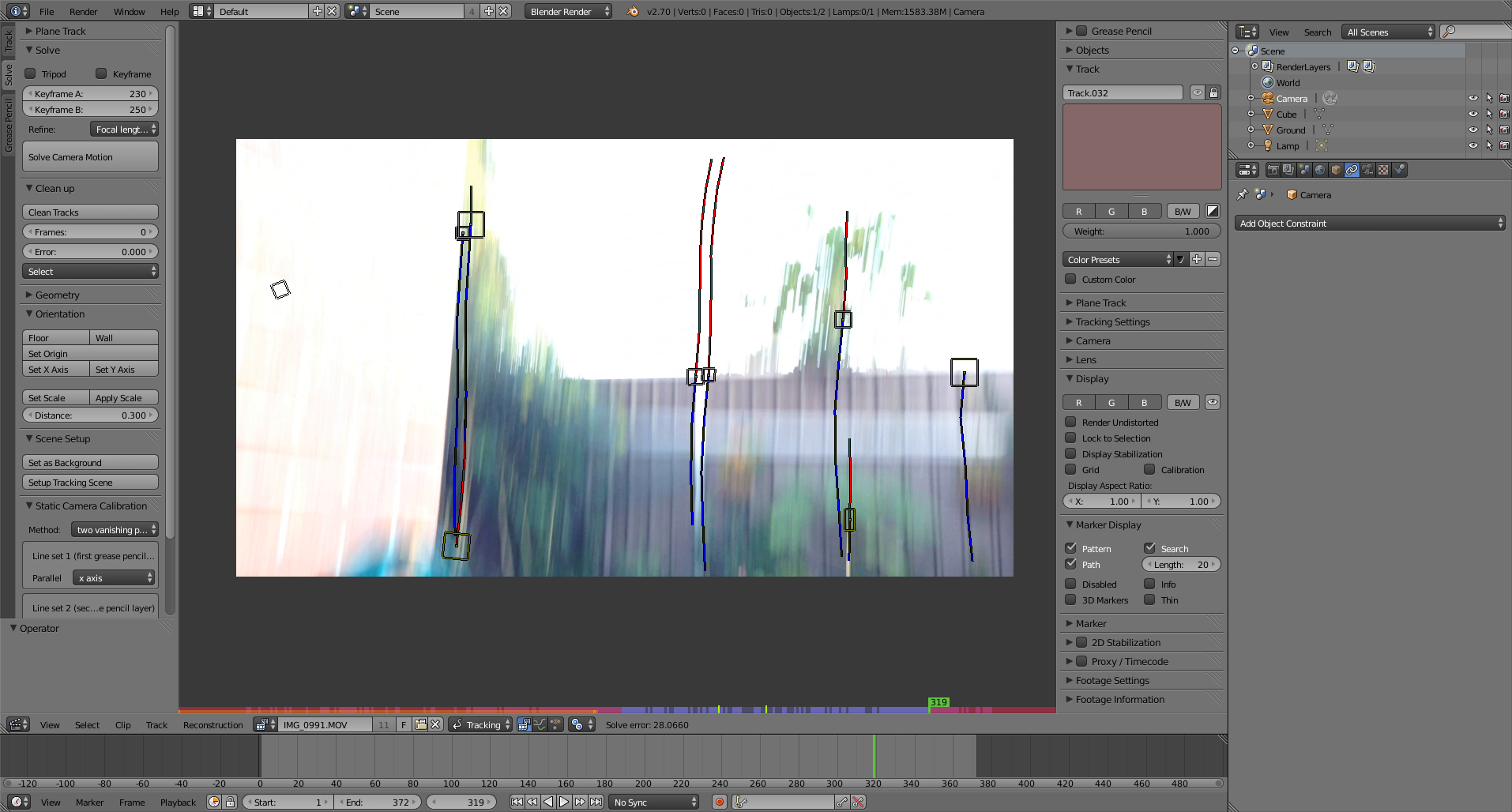 The scene itself has very few distinctive features to anchor the trackers on. The cement floor and the wall have almost the same texture, so blender has a hard time finding specific points from frame to frame. The best tracking points in an image are those with unique features and sharp contrast. 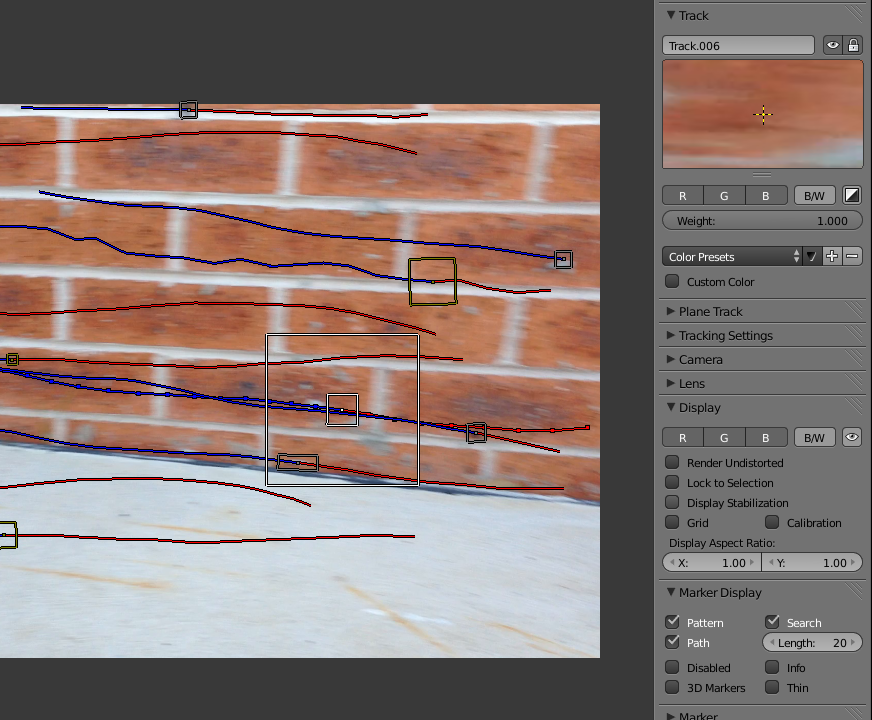 -Solution: Find a distinctive features in your scene or add them to make the tracking accurate. You can do that with bright tape or with a color that is not part of the scene (you can also use marbles or colored balls). Those markers you can remove later.

2- The way the camera moves in the original shot determines the kind of camera solving that is required.

The default camera solver in blender presumes some parallax, or change in perspective, like when you walk and objects in the foreground move faster in the frame than those far away.

If the camera is static on the same place (not advancing laterally or going up or down) but just rotating or tilting, then the shot cannot be solved with the regular mode in blender.

-Solution: You have to use "tripod solve" (even if your camera was not on a real tripod). That solution will give you a 3D camera that mimics the original move and the tracking points will be projected form the camera, not necessarily reconstructing the geometry of the original objects. In tripod camera solving it is much harder to accurately estimate distance.

3- Accurate tracking is the only way to get a proper solution.

The error messages and red bars you see are all the frames blender couldn't reconstruct and are listed as the errors on the console. This happens as the result of blender not having enough information to accurately recreate the camera in the 3d environment.

Solution: Refine your trackers, make sure they don't slip or start tracking unwanted parts. Delete trackers with errors (use the clear track forward/back tool). Play with the correlation values when the tracker fails. The goal is to have a solve error as low as possible. If you can get it to be around 0.3 you'll be fine

(But you can save yourself some time by going out and shooting a new video keeping in mind all of the above). good luck!

FOR MORE TIPS ON MOTION TRACKING READ THIS POST