I would like to create a material that has a volumetric component whose local Density depends on the depth of each volume point below the surface.

Can the information "how deep below the surface is a given point" (i.e. the intensity of red color in the figure below) be obtained directly from the material nodes, without adding extra geometry or modifiers? 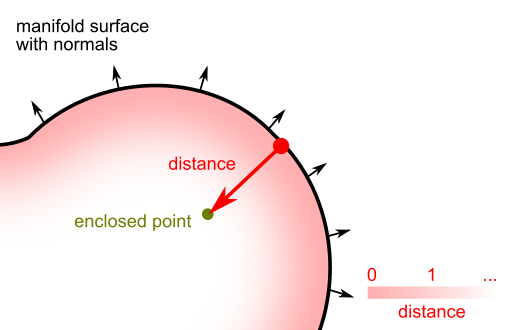 I've tried using the Z component of the UV Texture Coordinate (after having assigned an UV map), and other kinds of node setups, but I couldn't find a way to obtain that quantity.

Another way of looking at it: consider that SSS can be seen as a Volume Scatter with a Density decreasing smoothly from the surface to one skin-thickness below, while an abrupt fall-off (density goes suddenly from one to zero) corresponds to a Volume Scatter applied on a mesh with a Solidify modifier.

I would like to be able to create any generic falloff profile, including these two.

Here's the shader in action, varying the emission color based on depth : 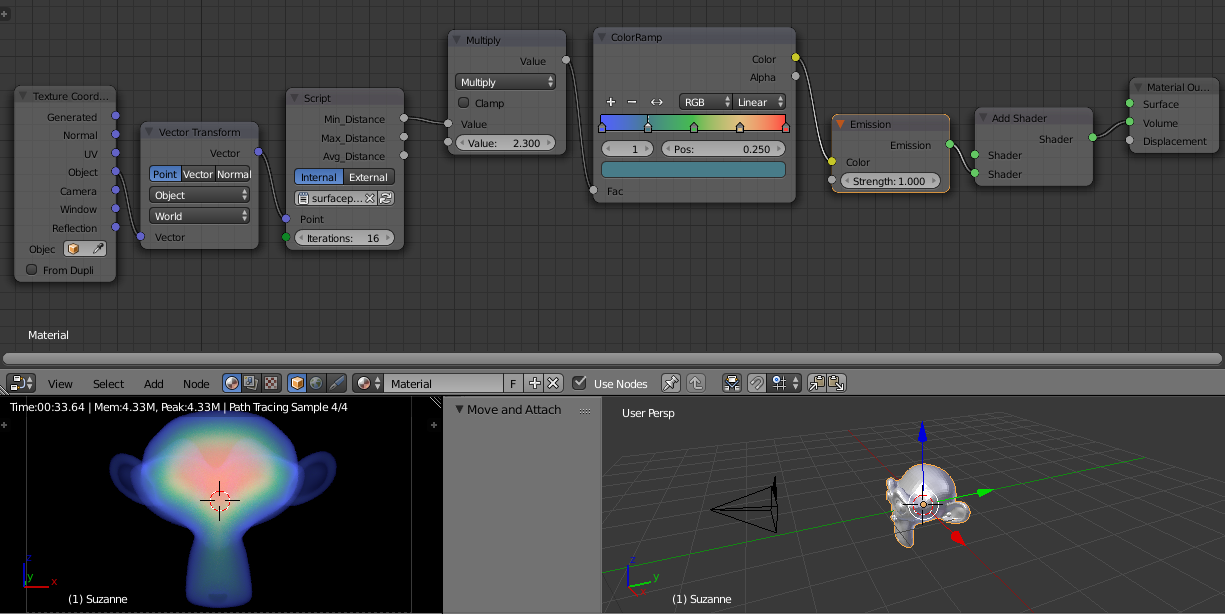 To use it, make sure you're using a version of Blender compiled to include OSL support and enable the Open Shader Language checkbox in the Render properties.

Create a new Text block and paste the above code. Name it something like 'surfaceproximity.osl'.

In your Node Editor, add a Script block and select the 'surfaceproximity.osl' text as its source. This should give you a node like this : 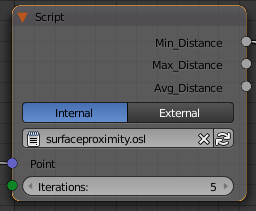 The 'Iterations' control how many 'probe rays' are projected out from each volumetric point - more rays will provide slower renders but sharper results (since it will sample more internal geometry of the mesh). Point is the location in World space for the origin of the probe rays (pass the Object texture coordinate through a Vector Transform node to transform the point from Object to World coordinates). The resultant 'Min', 'Max', 'Avg' are the minimum detected distance (ie, the closest point) the maximum detected distance (the furthest away point) and the average distance of all probe rays (gives an indication of how 'enclosed' that part of the volume is (a thin section of mesh will tend to have a smaller average, a wide open section will have a larger average - when compared to the min and/or max).

The 'Min_Distance' can be used to indicate the depth from the surface of the mesh. For example, it can be used to control the density of volumetric Scatter/Absorption to give Suzanne an internal skeleton as follows :

Here the OSL shader is set to project 16 probe rays (Iterations) from each point within the volume. This controls the density of the Volumetric Scatter such that closer than 0.1 blender units (the Greater Than node) it is transparent (density 0) whereas further in than 0.1 blender units it is opaque (density 30). An Emission shader makes the 'skin' of Suzanne surrounding the 'skull' visible to show the effect. Adjusting the 0.1 in the Greater Than node will vary the thickness of the 'skin' (ie, the depth at which the 'skull' begins).

Similarly, you could use a Less Than node to create a 'Solidify' effect (the inverse of the above example) or drive the Volume density directly from the output of the OSL node to vary the properties smoothly - as mentioned in the original question.

Not the answer you're looking for? Browse other questions tagged cycles materials nodes volumetrics osl or ask your own question.

0
Is it possible to vary material colour depending upon thickness of the underlying mesh?
8
How to make Volumetric Scatter fade adjustable
11
Is it possible to invert the SSS shader effect?
6
Emission based on volume
10
Emission shader that glows on the center of the object and is dark on the edges
4
How to make a glowing crystal texture in Cycles?
2
material issue - how to make blurry/emissive material?

9
cycles node setup for volumetric shader
6
Volumetric Spot Light with Cycles
0
Use the same color for two materials?
3
What does luminance have to do with the blackbody node?
9
Procedural volumetric texture generated from a script
0
Blender Internal -> Rendering: Stopping surface materials of background objects from affecting volumetric materials of objects in the foreground
0
How do I use the node editor for material?
2
Use Node Setup for various Materials