I've opened up the default scene in blender and from what I understand 1 Blender Unit is equivalent to 1 meter.

Now I exported a cube where I had the scale set to 0.025 on all axis. 0.025 is roughly equivalent to 1 inch. However when I imported this into scenekit via XCode and placed it into a scene it was twice the size of an equivalent Cube I created directly in XCode to match the same scale. The XCode generated cube was appearing at 1 inch (using some AR functionality here to verify the measurements)

Having toggled some scale menus in Blender to show units I can see that my 0.025 scale in blender is actually equivalent to 5cm or roughly 2 inches 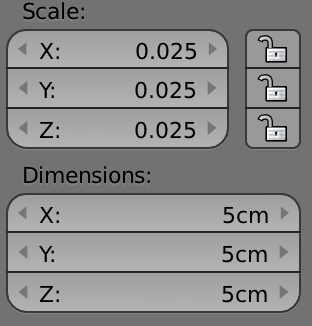 If I used the dimensions window to explicitly set my dimensions to be 1 inch, it returns 0.013 as the scale (validating to me that it is double the size).

Being quite new to Blender I'm not sure how the scaling is meant to work. Can someone explain to me what's going on here?

Not the answer you're looking for? Browse other questions tagged export dimensions scale or ask your own question.

17
Scale settings for exporting to STL (for 3d printing)

8
How to scale dimensions proportionally to a specific size?
0
Understanding Proper Scaling for 3d Export dimensions
0
Rip and scale Blender
2
Scale locally in blender 2.8
1
blender 2.8: why do I need to scale 10x on STL export?
1
How do you lock groups of vertices in an object in relation to each other so that when scaling the object those vertices don't scale?
2
Changing scale without changing dimensions
0
x3D export messes up scale