Recently I've been trying to import into my game the mesh of a terrain that I have in Blender. I chose to use a model other than a heightmap because it's needed the maximum accuracy possible. Unfortunately the model, once highly detailed, has 263,169 verts and this exceeds the maximum limit that a mesh can hold into the engine I use (the limit is normally 65,536 verts).

As a solution I read that the engine can manage without problem models with more than limit if the model is "subgrouped" in meshs with at maximum 65,536 verts. There comes the problem for me. Until now I've been trying to do this in Blender, that is, to "subgroup" my mesh, but, sadly enough, entirely unsuccessfully. I've never used Blender before and, although all my research, I still don't have even the slightest idea about how to do such thing.

I found this link, but I don't know if this is exactly what I need... I also achieved to create "groups of vertices", but only through a very manual process.

This is the image of the terrain, if it helps:

My working vacation is near, then I'll have time to study Blender a lot more. I would be very grateful having some tips about where to start in the case of the described problem.

Just doing the basic math, you have 263,169 verts, and the maximum limit per section is 65,536 verts, you will need at least five subgroups (263/65 is greater than 4). Unless there are other considerations in the game engine that would force otherwise, I'd create groups which share common characteristics. For example, relatively smooth areas have few verts, and mountains have many. This image 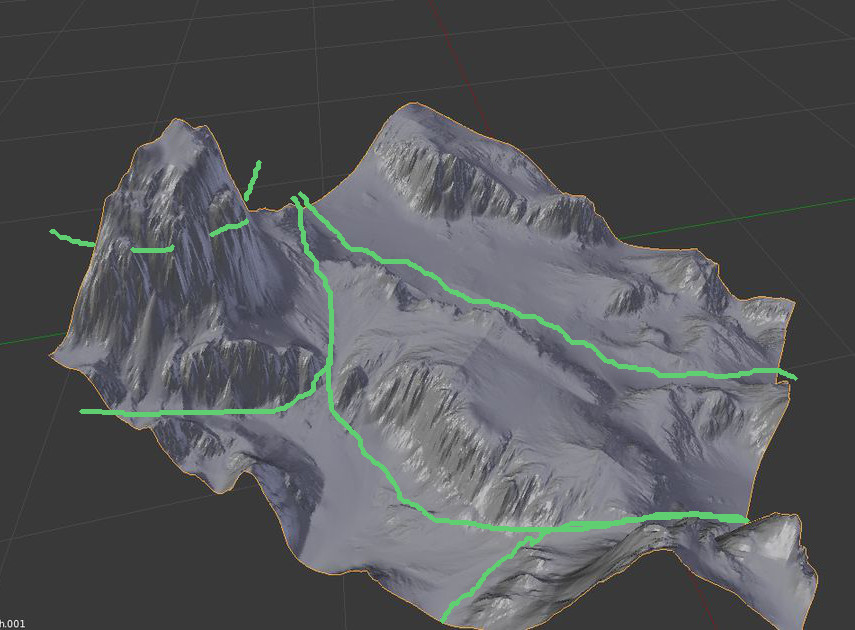 shows the subgroups I would define in the case of your terrain object. I might be inclined to stretch the number of subgroups to 6 of more, if I need to separate out roads easily, and if the mountain in the upper right has too many vertices. In the case of the mountain, if I had to separate that into two subgroups, I'd cut into a bottom and a top subgroup, as indicated by the dashed line.

As top exactly how I would define the vertices would depend upon the details of the game engine. I would certainly define vertex groups to make it easy to select (or deselect) one or more of the subgroups at a time, but I suspect that the subgroups would need to be made into separate objects which are exported to the game object as part of a single scene. This will depend upon the details of implementation of the import process for the game engine.

Disclaimer: upon seeing your actual mesh I might make different choices for the subgroups I'd use.

Here are a few possible approaches. You can split the mesh up into several different meshes, which appears to be what you are asking for. It's rather tedious, but if you only need to do it once it will work.

Alternatively, if the mesh doesn't have to be preserved 100%, you could reduce the vertex count of your mesh. The decimate modifier provides some great options for simplifying a mesh without losing much detail. This may lose some accuracy in the flat parts of the terrain, where it really isn't noticeable, while preserving detail in the steeper parts.

Not the answer you're looking for? Browse other questions tagged modeling objects vertices or ask your own question.

14
How does normal baking work?
1
Split mesh of trees into many parts

1
cutting a mesh object into equal segments for individual export to .dae
2
Normals of mesh are super small like a dot, what could have possibly gone wrong?
2
Stretching fabric
0
Attach edge without existing verts
4
How can I effectively import and texture a large height mapped terrain mesh?
2
How to align vertex selection to an edge/vert?