how to change a mesh given by mathematical function with time i.e. how to include the time parameter in the mathematical equation?

I am trying to make an animation in which a mathematical function changes as a function of time. Given below are two images which are z math surfaces(from the "extra objects" add on) whose equations are:

The first image should change in the other for which the mathematical function can be given as $\sin x+t\cos y$, where $t$ varies from $1$ to $-1$

This is a simple mathematical surface parametrized in $t$ ($t$ obviously is a function of time and in our case a function the frame number).

Here I have picked up simple equations just to get the idea of implementing it and I actually intend to use it for more complex functions and even for the XYZ math surface. How do I go about it? (I would prefer a way without scripting but if I have to use scripting then please tell me in detail as to how to proceed with it.)

I'm not aware of a simple way to do this without scripting, so here's a scripting based solution, using a frame change app handler.

frame_change_pre app handlers run before every frame change, so they're ideal to update a mesh every frame.

This function alters the active object's vertices Z values according to the equation z = sin( x ) + t * cos( y ). Here, t is a normalized value that maps frame numbers between 1-100 to values between -1 and 1.

To use this add a grid plane, subdivide a few times, scale X5 in edit mode, then run the script once and keep the plane selected and active.

I would suggest using Animation Nodes for more interactive results.

The Grid Mesh node generates evenly spaced vectors (Which can act as your 2D coordinates plane). 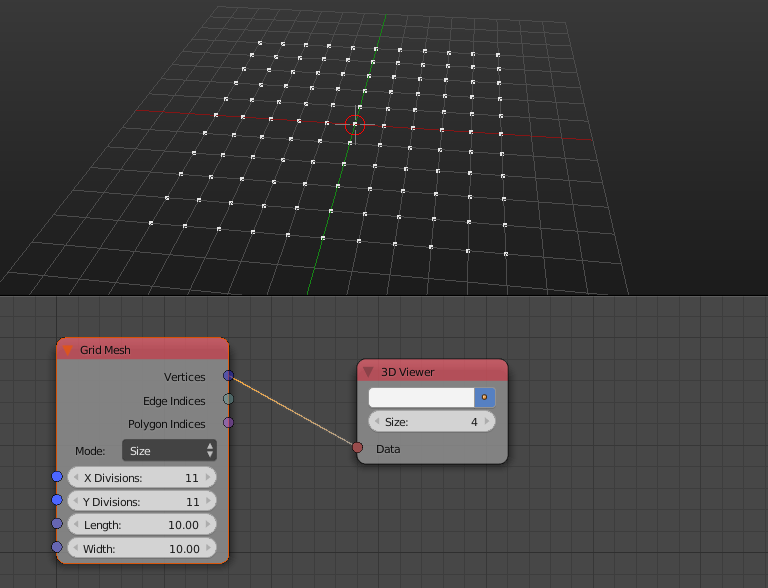 I separate the vectors into their x,y,z components (Z is zero in the grid), for every vector I compute the equation you provided above in terms of the x and y values I extracted, then I form a new vector from the x, y and z where z is the value we computed, resulting in points that satisfy your function: 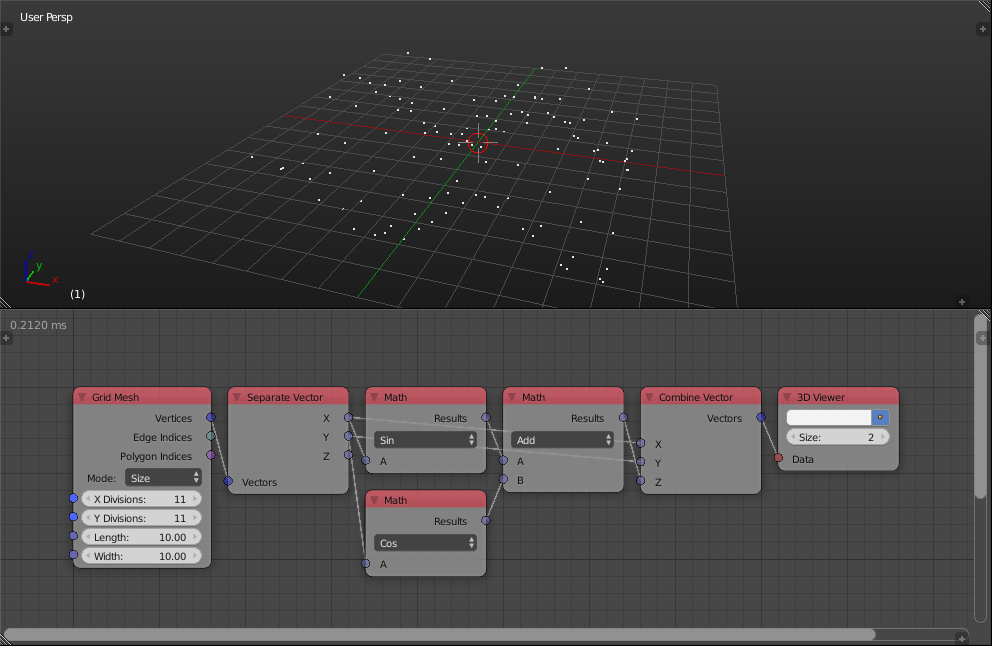 In order to make it a 3D mesh with faces, we use the original polygon indices and new vectors to make a mesh as follows, this is just how meshed are output to object: 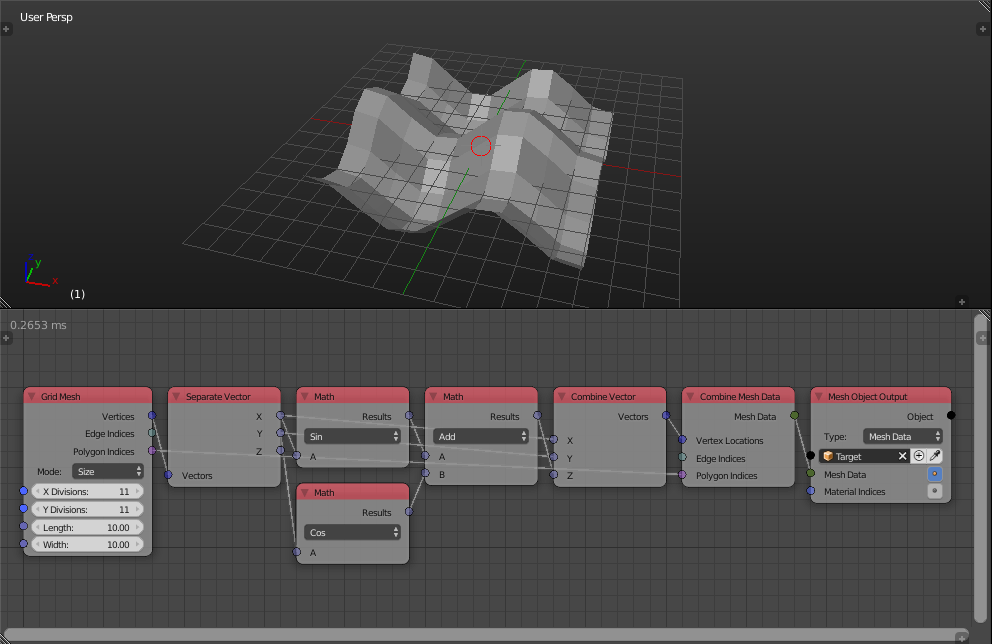 Last step is to introduce the (t) in your equation, which will be time, we can use the animate float node with the starting and ending values -1, 1 respectively as you stated in the question. And of course Duration is the duration of the animation. Resulting in the animation as you see:

If you want to color the surface based on its z value, where the higher the point is the higher the red value and the slower it is the bluer it is, you can use the following shading node tree: 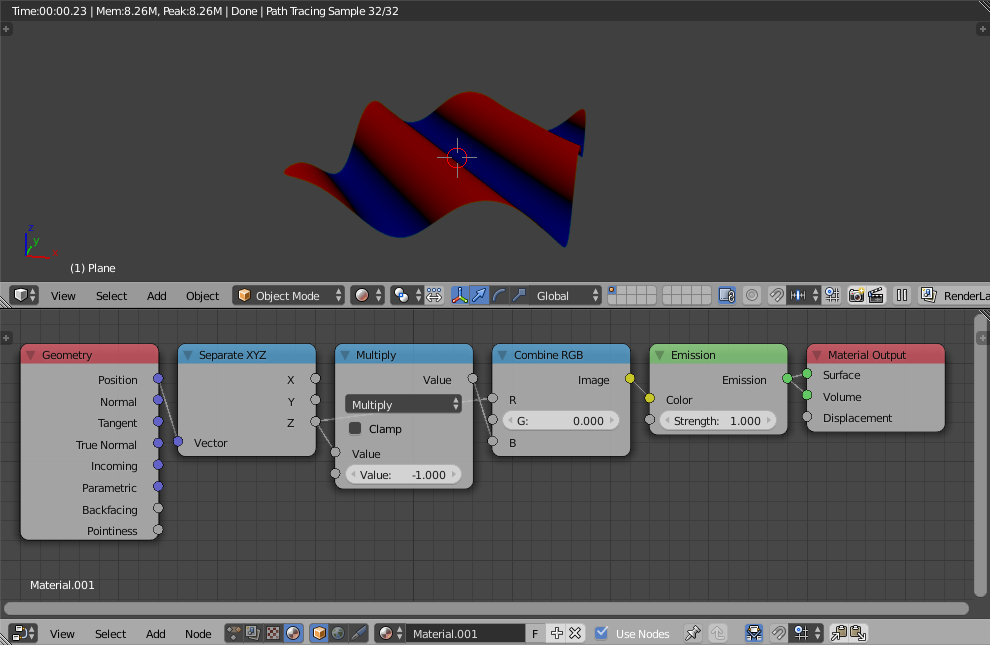 Make one mesh with your equation (1) 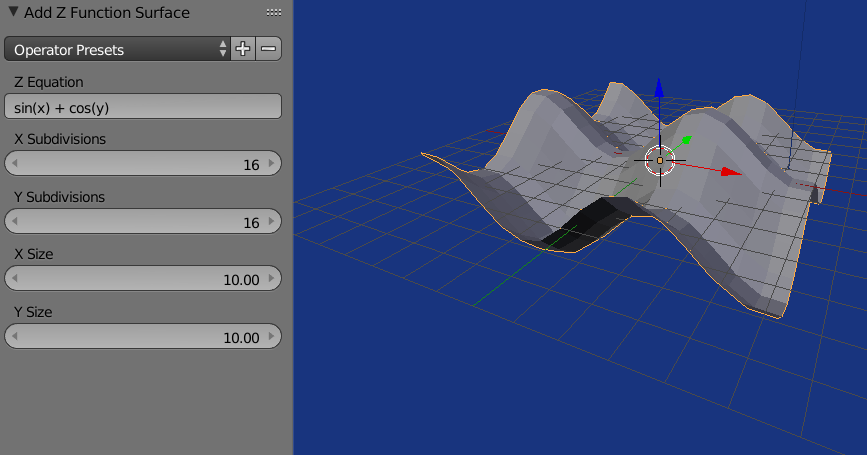 Then make another with equation (2), making sure x and y subdivisions remain the same. You need to have the same amount of verts to join as shapes. Select both meshes and choose Join as shapes from shape key extras.

Not the answer you're looking for? Browse other questions tagged animation mesh mathematics or ask your own question.

1
Script method to trim mesh objects
3
How to change material properties with time
27
How can I generate an object from a mathematical function?
2
How to project a single x/y coordinate in z-direction onto a specific mesh with scripting
1
Animation Nodes - calculate factorial of frame numbers
0
Difference boolean for overlapped objects or any possible alternative
11
Branching and swirling mesh on a ring
1
Using Animation Nodes with the expression node with equation starting with x(n+1)=
1
How do i convert this equation into the node editor?