I've animated an extruded curve (with the bevel start slider) so it grows and applied some micro displacement to it but it seems that the displacement is calculated for each frame separately looking at the mesh as is by that frame, independently from the previous & next ones, making a sort of animated displacement texture...which is interesting but i'd like a "fixed" deformation instead where the cracks etc...the whole deformation is maintained as the tentacle grows...

Is it possible ? (maybe it's possible to bake the animated model and then uv unwrap it to apply microdisplacement at the very end of the process ?) 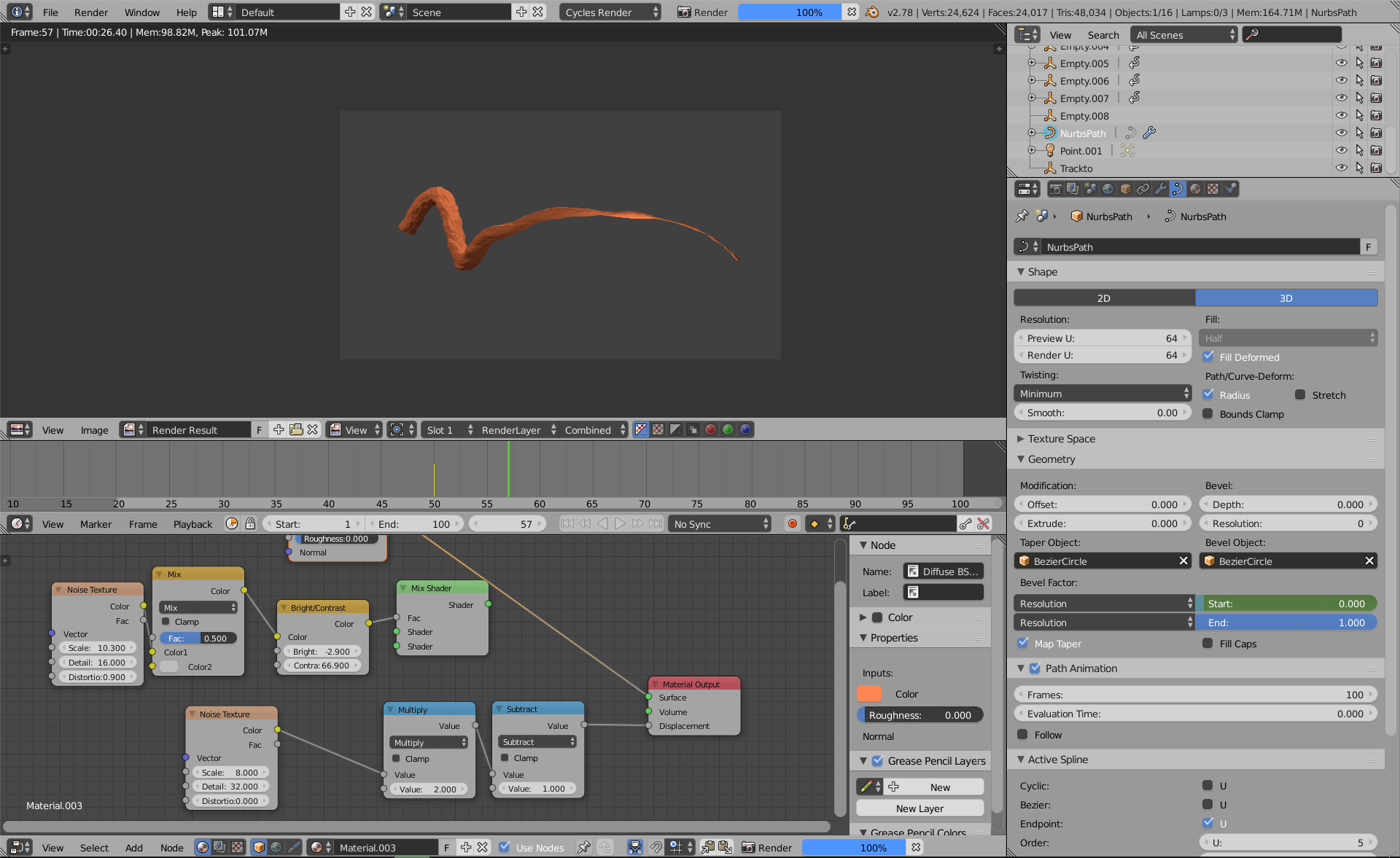 I see no vector input in your textures nodes. What texture coordinates are you using?

Generated textures will often default to either Generated or Object type of automatic UV coordinates when omitted, both of which are local coordinate dependent.

That means geometry based animations with local mesh deformations in object space coordinates will change the sahpe of the geometry and hence its apparent UV mapping for a certain vertex, making it look like an animated texture.

You could use Bezier curve automatic UV coordinates, but those will most likely also deform along with the "growth effect" giving either an animated effect similar to what you have now or a non uniform stretching effect (which I am not sure is what you want or not).

Only way I could see this work is using a manually unwrapped mesh object instead, with controlled UV coordinates based on actual vertex, instead of object coordinates.

You could mate a cylinder object, with a quad based geometry, unwrap it into a orthogonal grid, then scale one of its ends to make it a cone. Subdivide it along its height enough times to suit your needs.

Then add a Curve deformation modifier so it deforms along the curve then use scaling along the local Z axis to give the growth effect. That should give a more static texture appearance even though it will still stretch with the growth. Otherwise you will likely also have to animate UV along with shape to compensate it.

3
Controling the speed of the tube animated with curve
0
Are there any viable ways of using the particle system with micro-displacement?
1
I animated curve with hook modifiers. How can i export the animated curve?
1
Normal Map + Micro Displacement = Bug?
1
Where Is Micro Displacement Setting Both/True/Bump In Blender 2.8
2
blender python: evaluate extruded curve points
0
Quads snapping up or down when displacement is animated
0
How to bake an animated bezier curve?