There is a camera following a path, and when I press I while over the Follow Path > Offset field, it throws an error of F-Curve with path 'contrains["Follow Path"].offset_factor[0]' cannot be keyframed, ensure that it is not locked or sampled, and try to remove F-Modifiers. There are no F-modifiers and it isn't locked or sampled. It has a Limit Rotation constraint on it as well but removing that doesn't help. How can I resolve this?

I downloaded your .blend file and found that if you uncheck the "Fixed Position" box, you can keyframe the "offset" value and it works fine.

Though it isn't what the offset field is meant for, and so unless you are doing a very simple camera animation doing this will get you in trouble, keyframing it does work. The technique is shown in this tutorial.

I think doing the steps out of order is what got me in trouble, although I haven't reproduced the problem. The file attached to the question has the offset values 'backwards' - the camera moves along the path when the numbers there are negative, so trying to control its motion by putting keyframes at position 0 and 1 (with the Fixed Position box checked) couldn't work and perhaps was the source of the error.

Deleting the camera and starting over resolved the problem. I did all the other setup of the camera before putting in the keyframes and it now works 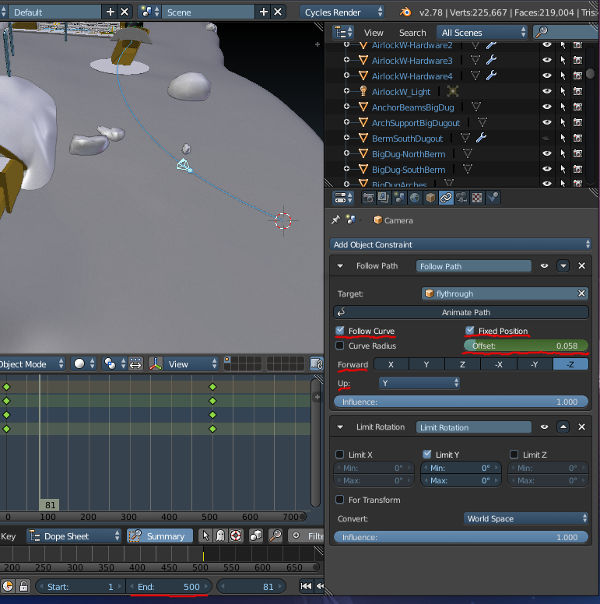 Another description of a similar process is in this answer by cegaton, which was mentioned in the comments on the question.

Now, I do in fact want to put normal offsets on the camera, which is what the Offset Field is actually meant for - I'd like the camera to move faster on the beginning of the path. So I may go to the effort of setting up the camera animation the standard way, in the Graph Editor.

Not the answer you're looking for? Browse other questions tagged animation constraints path error or ask your own question.

11
Change start time of camera following a path?
5
How can i edit a follow path constraint with the graph editor?

3
Animate 8-shape kite flight pattern with fixed camera mounted to it
3
Follow Path interpolation problem: numerical instability?
2
Offset Camera to Local Axis
0
Keyframed camera animation
1
How to make this object child of another object, and conform to a curve at once?
1
How to get an empty tracked by a camera to move smoothly between keyframes
0
Bending a mesh along spline which it's also following,not working
0
Block camera roll while following path