Creating a texture and normal map from a 3D model / scene

So as a very simple example of what i mean, consider having a model of a brick, with texture, a normal map, maybe even a tessellation/displacement map. Now if i go and arrange copies of that model into an entire wall, with some bricks slightly tilted or what have you, making it look in some way unique. Is there any way to create a texture and normal map (maybe even a tessellation/displacement map) from that scene so that when those textures are slapped onto a simple plane or cube it looks like that "unique" wall?

I tried taking a screen shot from the rendered scene but that gives only a diffuse texture and the lighting is also an issue.

Needless to say i'm not well versed in 3D modeling, but was hoping to create some textures i need in this way. Not sure if it's possible with blender or in general.

edit: originally i referred to tessellation/displacement map as bump map which turns out to be the same as normal map

I think you are looking for Render Baking:

Here is an example, the top wall is a plane with baked normals and render shading from the bottom wall: 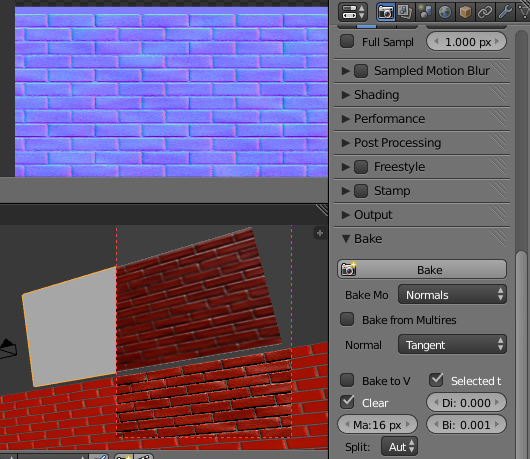 Note that baking is only available in BI currently, but support for it in Cycles is already in a testing state (you can use it, but it is still experimental) and is targeted to be in 2.71.

3
Normal map on only part of the material
0
normal map inverted in cycles
0
How to: High poly to low poly normal map + high poly texture + normal map of texture detail
1
Can I render a normal map into a diffuse texture?
0
Most efficient way to apply textures to a model (Game Dev)
3
Normal map when painting in blender
0
Sandstone Border Bulges
0
Texture paint changes size and doubles in Layout mode