How ought I lock particles' rotation so that they always face their velocity vector?

I have a particle system that manages a bunch of very small spaceships coming from a mothership, and I'm wondering if there's an efficient way to make each of those particles face its own velocity vector.

Each particle is independently affected by a set of force fields I have set up to give them a natural path. They are emitted from a single vertex with a random velocity between zero and one,and I have managed to get them to face their original velocities by enabling Rotation and setting Initial Orientation to Velocity/Hair.

I have tried various combinations of Angular Velocity and Dynamic rotation settings in hopes of achieving the desired effect, but no dice so far. Any ideas? 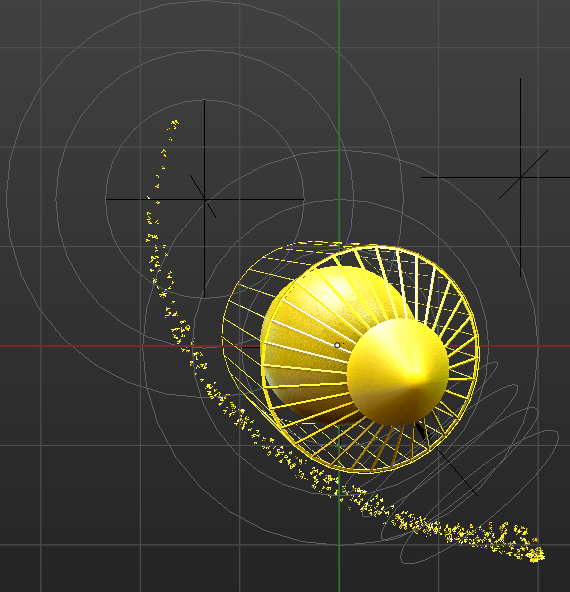 Please save my sad, directionless spaceships!

This can be done using the Animation Nodes addon. I've made a node graph that makes particles orient to their velocity. It's kind of a hack, but basically the idea is to create an instance of the ship for every particle in the scene, and then rotate the instance according to the particle's velocity. So essentially, you're replacing Blender's particles with your own. Also, you should make the original particles invisible by going to Particle System tab -> Render and selecting "None". 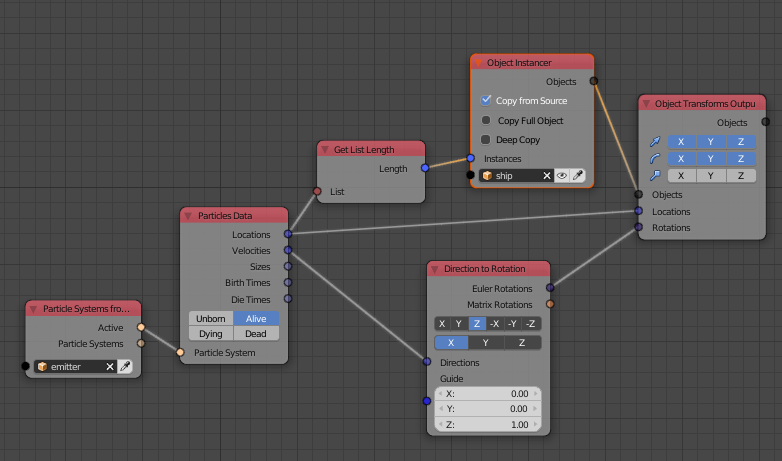 And here's a proof of concept using this node graph:

Duplicate Spaceships on Faces and use a Curve Modifier

Duplicated Spaceships follow the Curve by Location and Tangent/Velocity Vector by Rotation. No unwanted distortion.

The GIF above is OpenGL Render Active Viewport ... Not Final Render. Thus you see one SpaceShip Not Following Curve ... Lets call that the Original Design Time Object ODTO. In Final Render the ODTO will not be visible.. so all duplicated Space Ships will follow curve. I am emphasizing a difference between design time visbililty and final render time visibility. 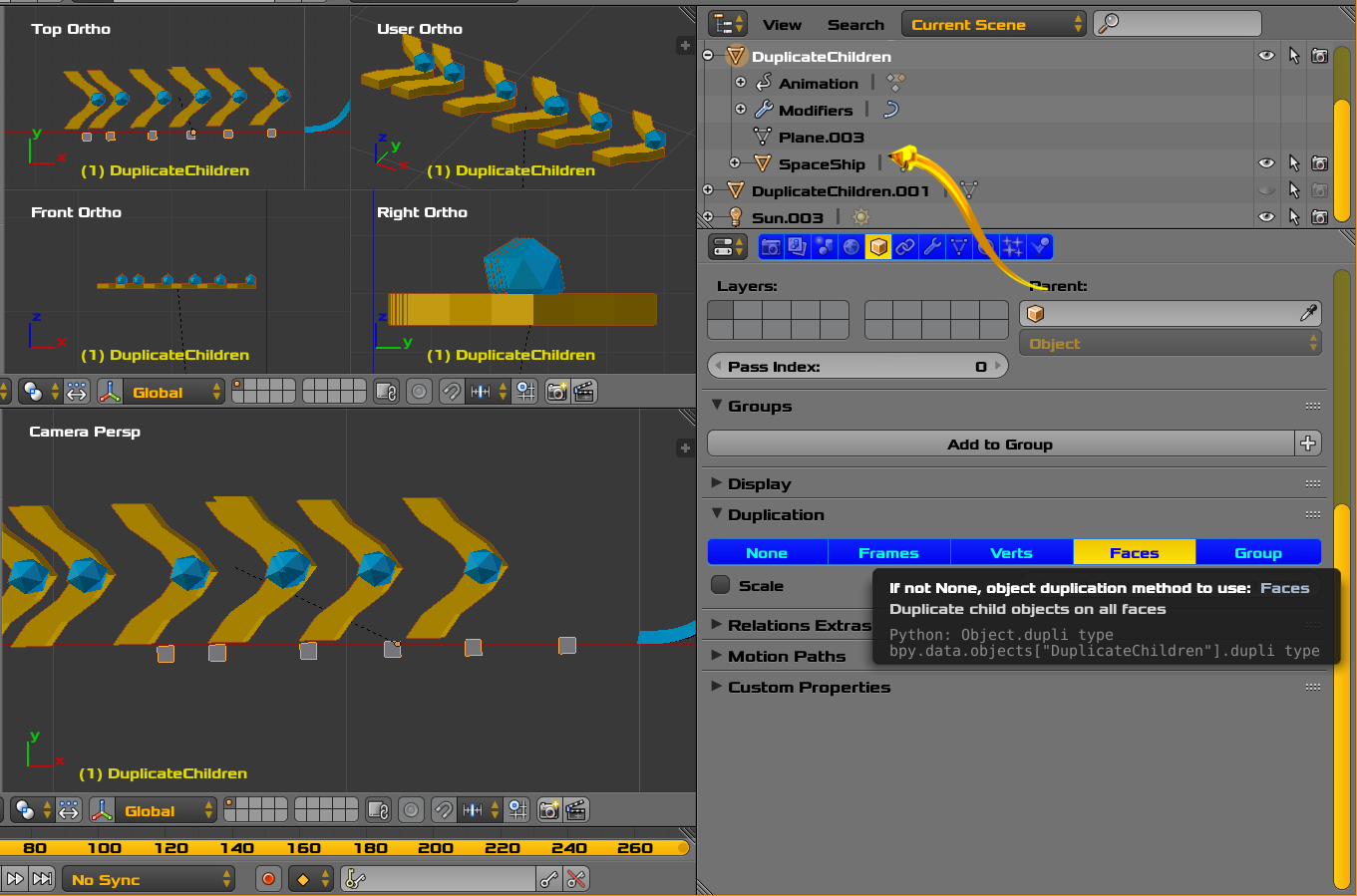 In the image above a mesh named [DuplicateChildren] is composed of squares in straight line is highlighted. Note in the Duplication Tab [Faces] is selected. This instructs Blender to make duplicates of Child Objects as seen in the tooltip. One mesh object creates many space ships for final render efficiently in terms of memory. Its child object is SpaceShip as indicated in the Outliner Window. For every face in the Parent mesh a SpaceShip is rendered. 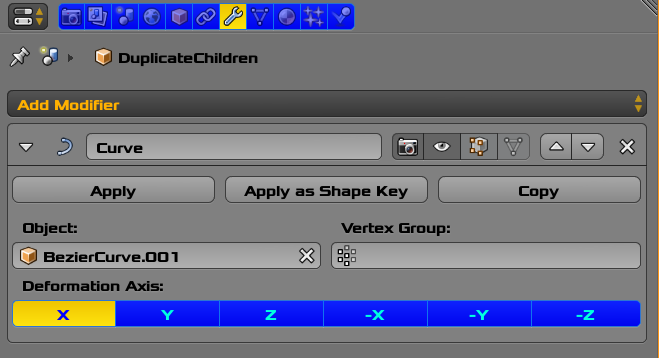 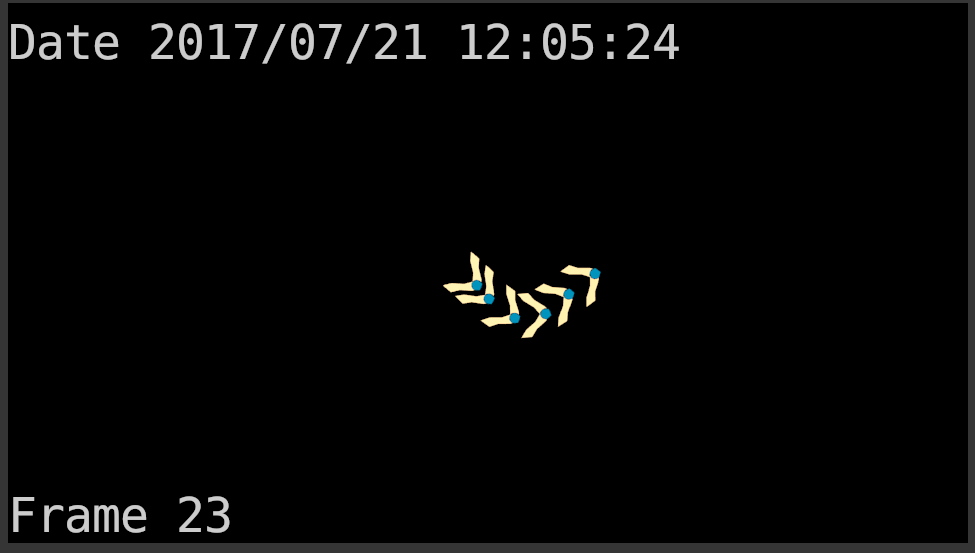 I am attempting to cover Keypoints only here. You can experiment and learn and improve what is shown here.

I believe using a Curve as a tool will give you easier and more precise results as part of your final solution. You can have many of the above arrangements. For the high population you stated you want, may need to compose many techniques.

I believe I have other answers using Duplifaces or Duplication on Faces as well.

See other answers at BSE on Duplication.

See the Blender Manual as well if you dare for more mastery.

4
How to give a variable rotation, scale or location offset to dupligroups objects?
1
Print(store) particle velocity vector and distance from other particles
5
How to deform individual particles along the same curve guide that they are all traveling on?
1
How can I realize "sticky" collision, i.e. that objects connect as soon as they touch?
0
How can I randomize rotation on z-axis with hair particles?
1
How to make emitted particles disappear when they hit a surface?
0
How to make particles change their direction 90 degrees