Triangles or Squares or both? Which polys are easier for to render and in number? Or what if there are more verts than 3 or 4?

I have a question, I am aware that sometimes triangles can make a better curve, or close enough, using less polys, but which are would be less work to render? 1 square, or two triangles? So that being said, would it be best to make all faces of triangles, or triangles where necessary and save squares where squares more triangles than squares would be? What if it has more sides? 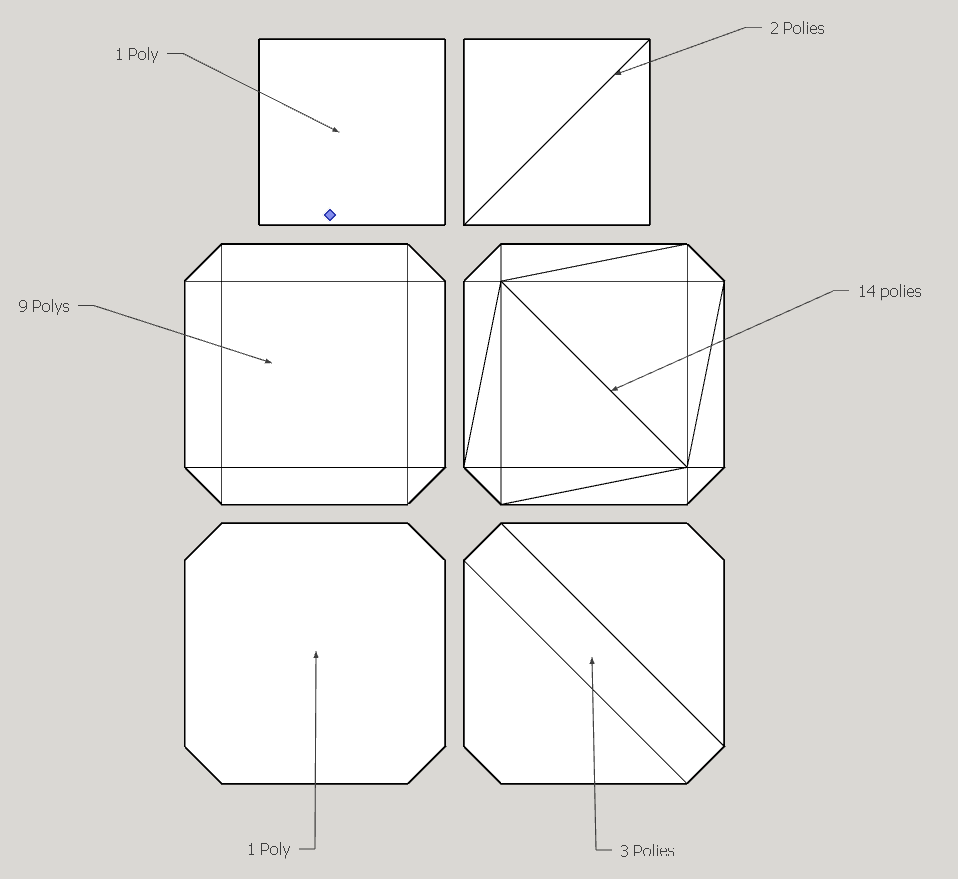 As far as I know, fundamentally speaking computers only understand triangles, nothing more.

So technically whatever you use will be converted to a three sided polygons only representation of the model at render time regardless. Having a triangle based mesh or a quad based mesh should not make a very significant difference at render time.

Storing a triagulated version of a mesh however will require more data and hence more memory and storage, because of the additional edge info that is being recorded. It should not be a very significant difference though, unless you have a very large and complex mesh.

Blue is quad based Suzane, orange is the same mesh triangulated

What you should be concerned with instead is good topology to make your models easy to work with, easy to edit or modify.

Quad based topologies are also good for animation, by being easier to rig and better at deformation based transforms, it makes them easier to texture through UV Unwrapping too.

Not the answer you're looking for? Browse other questions tagged modeling rendering polycount or ask your own question.

2
How to quickly separate and/or delete extra faces created by extruding?
2
Beginner question: Increasing poly density for a single side of a cube
6
combining two sets of vertices to maintain a specific shape?
0
Duplification preview with mirror modifier and subdivision surfaces
2
How do I make the ends of a pole less square?
1
Should I convert my quad mesh to triangles? If so, can I do it in this script?
4
Modeling a low-poly crater in Blender
1
How to keep triangles connected and the same shape, while modifying/transforming?
1
Maintaining Good Topology When Part of a Mesh Becomes Non-Quad