I'm doing another lightsaber movie and I just realized something that makes me pretty sad.

My workflow is such that I edit, then export reference footage, animate the lightsabers, and then render out the lightsabers and clashes by themselves that way I do not lose more quality in the original footage and I have more flexibility. However, I realized that the images I'm seeing in the compositor aren't quite the same as what comes out of the VSE when I set the clip to the Add blend mode:

Here is my node setup: 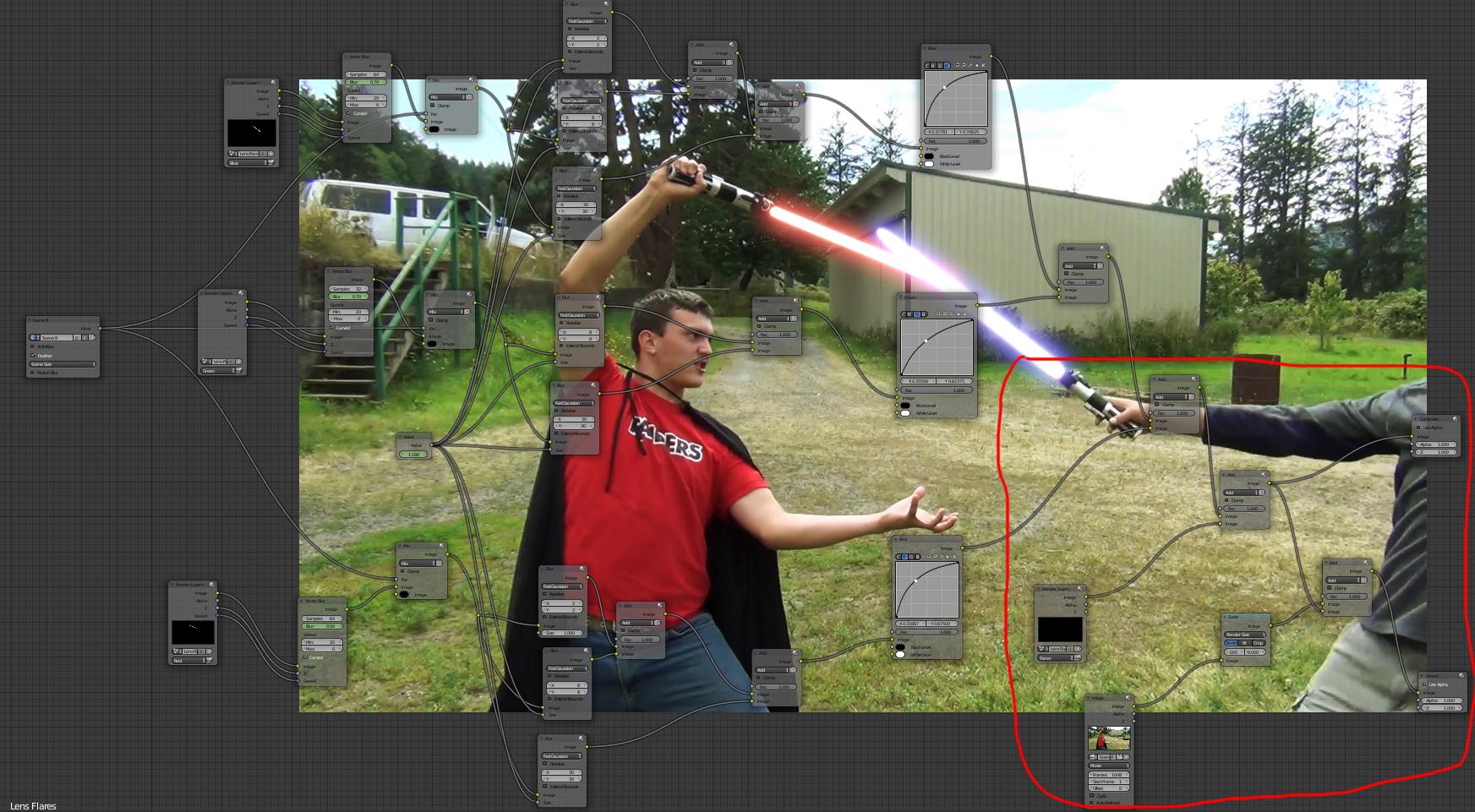 This makes it so I can see how it should look with the footage and render out the lightsaber layer before it's added to the footage: 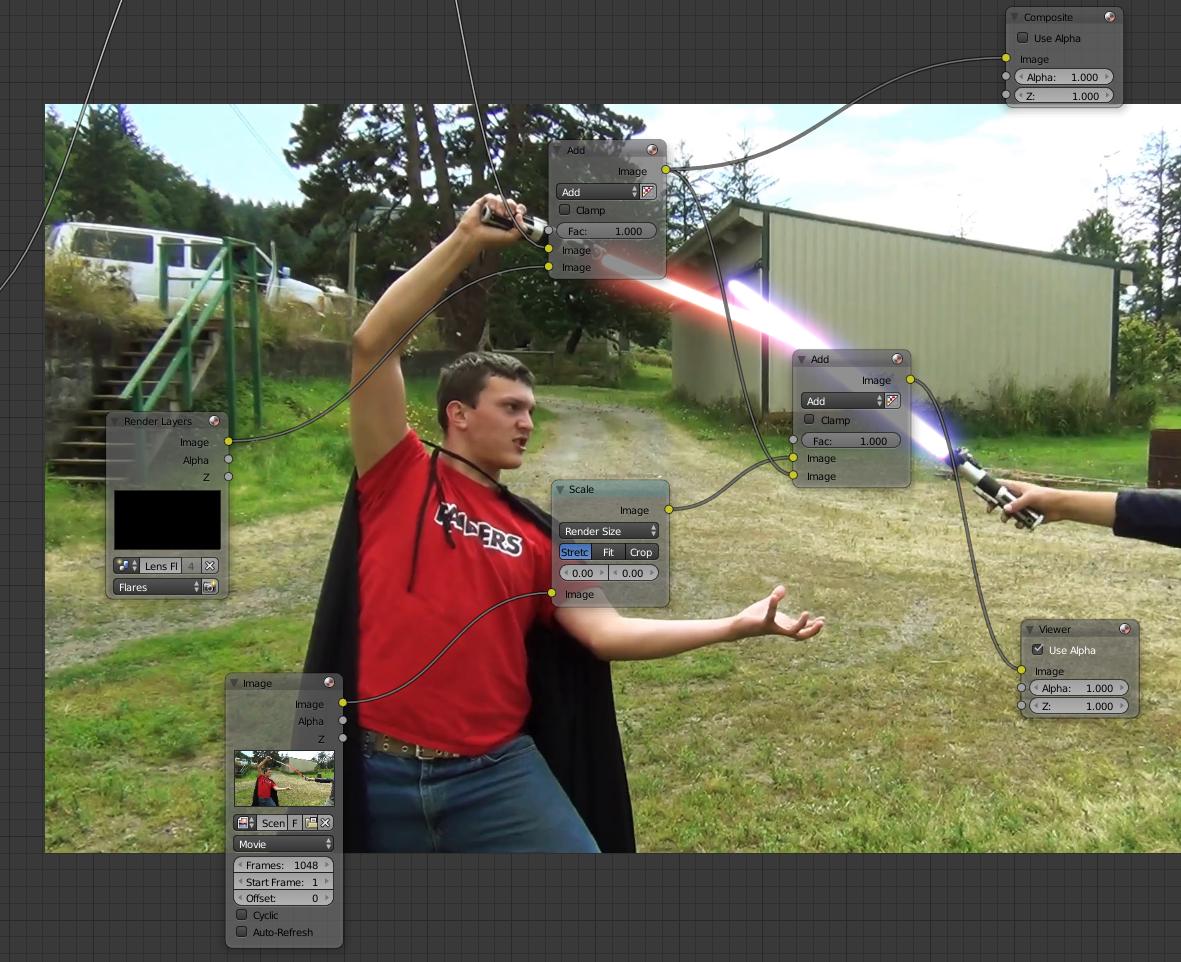 So then I take the rendered out lightsaber layer and add it back in the VSE: 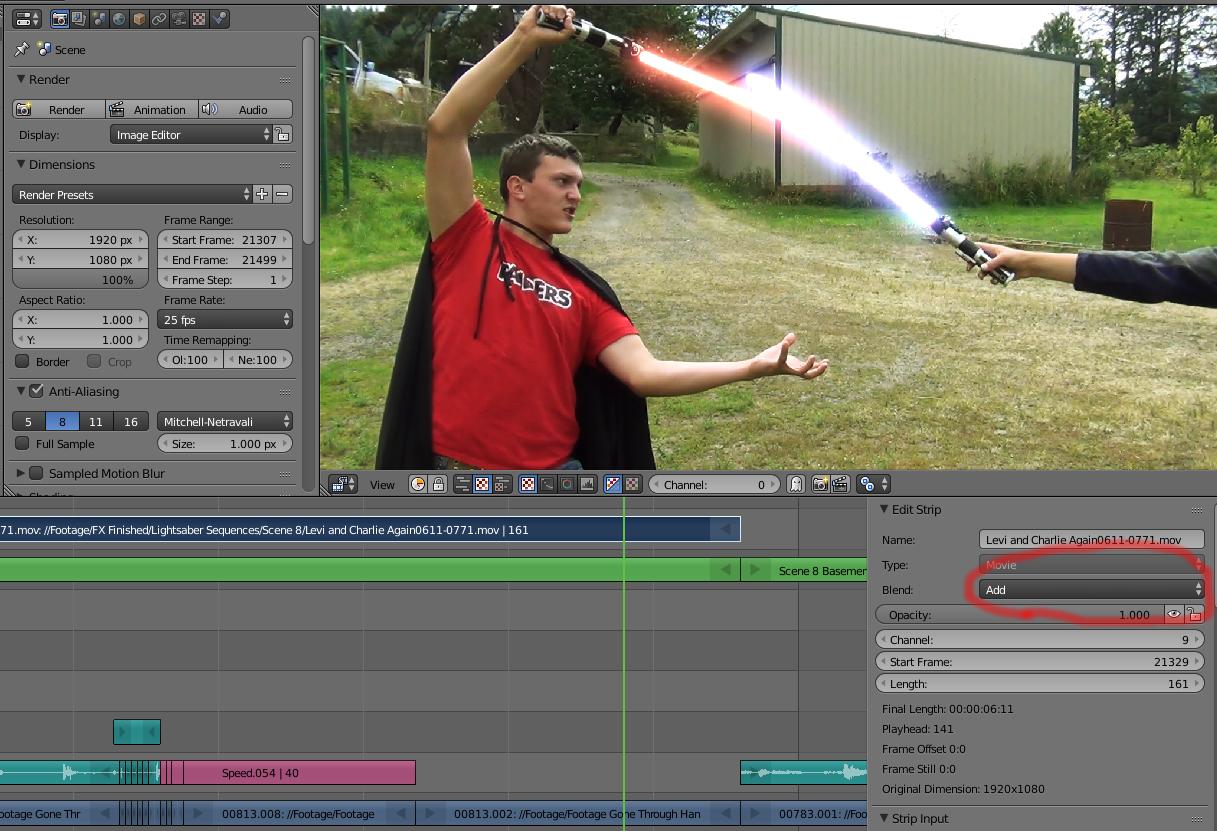 But much to my dismay, rendering out stills from the compositor and VSE look very different (I personally prefer the compositor's look). 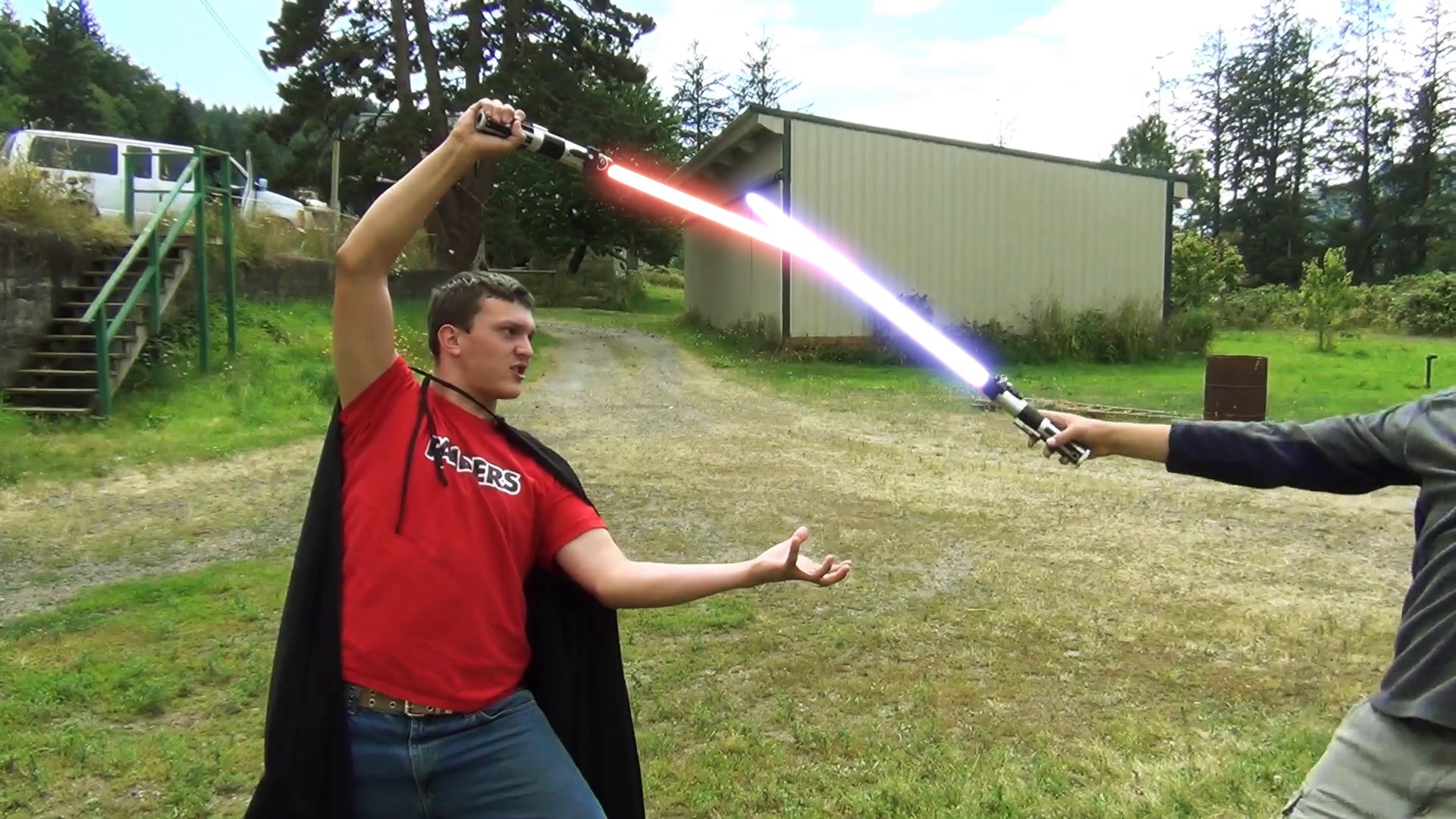 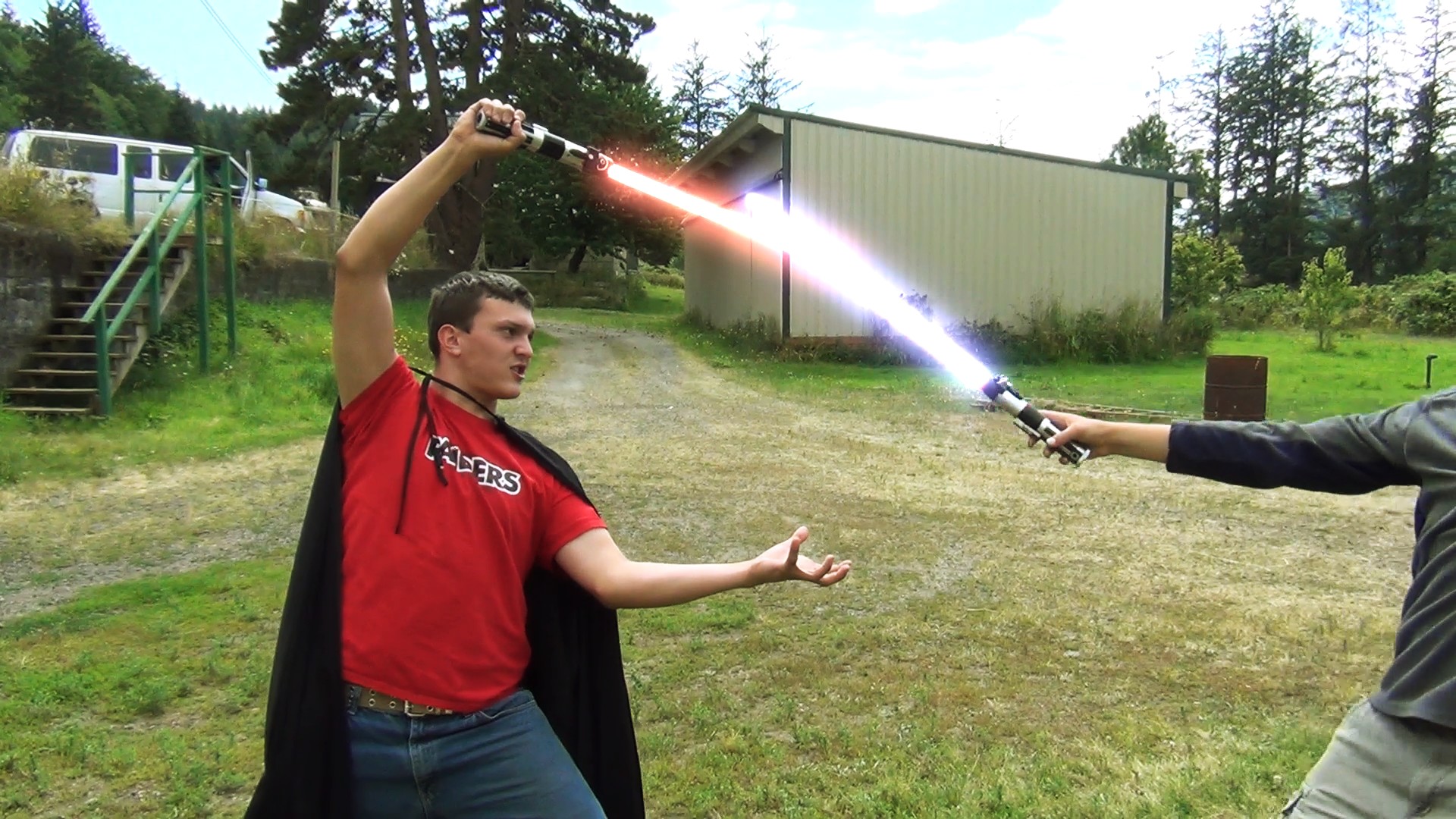 To see the difference easier, right click to view in a new tab and then tab between the two (I didn't want to loose any more image quality by using a .gif).

So what is the difference between these two addition functions and how can I make it so the VSE add blend mode has the same result as the compositor? Clamping the add nodes and turning off the adjustment layer does not influence this effect.

UPDATE: Rendering to .exr surprisingly does not fix the issue. Further testing also shows that the issue is most likely in the adding method.

Most likely the difference is not how blender does the add operation, but the fact that you are dealing with two very different kinds of images.

"I personally prefer the compositor's look"

In the compositor you have the original rendered layers, 32bit float linear, scene referred information.

If you compress that into a video format then you've transformed your images into something quite different: 8 bit display referred images that have been converted using the view transform (set in the color management section), and on top of that they have been compressed using some codec that basically trows away a lot of information in order to have smaller files and creates a new set of problems...

What is the solution then?

You don't want to loose quality on the VFX created in blender either! like the quantization and saturation errors you show on the last image.

So instead of rendering to a video format, save your elements to OpenEXR files. You will preserve all of the information from your original render and it will give you even more flexibility for your final compositing.

Also, since you are dealing with emissive elements with no opacity, you need a format that can do proper associated alpha. EXR will allow you to use proper transparency for the emissions and glows.

Not the answer you're looking for? Browse other questions tagged video-sequence-editor compositing-nodes blend-modes or ask your own question.

4
Mix shaders with blend modes besides Add and Mix?
3
Applying animated compositor to pre-rendered animation frames
0
Video editing workflow - VSE and compositor slows down framerate when previewing?
6
Movie editing : VSE or compositor?
0
Run VSE movie strip output through Compositor or Compositor movie clip output through VSE within one project possible?
0
alpha over node is adding to the foreground artifact that is not in the background