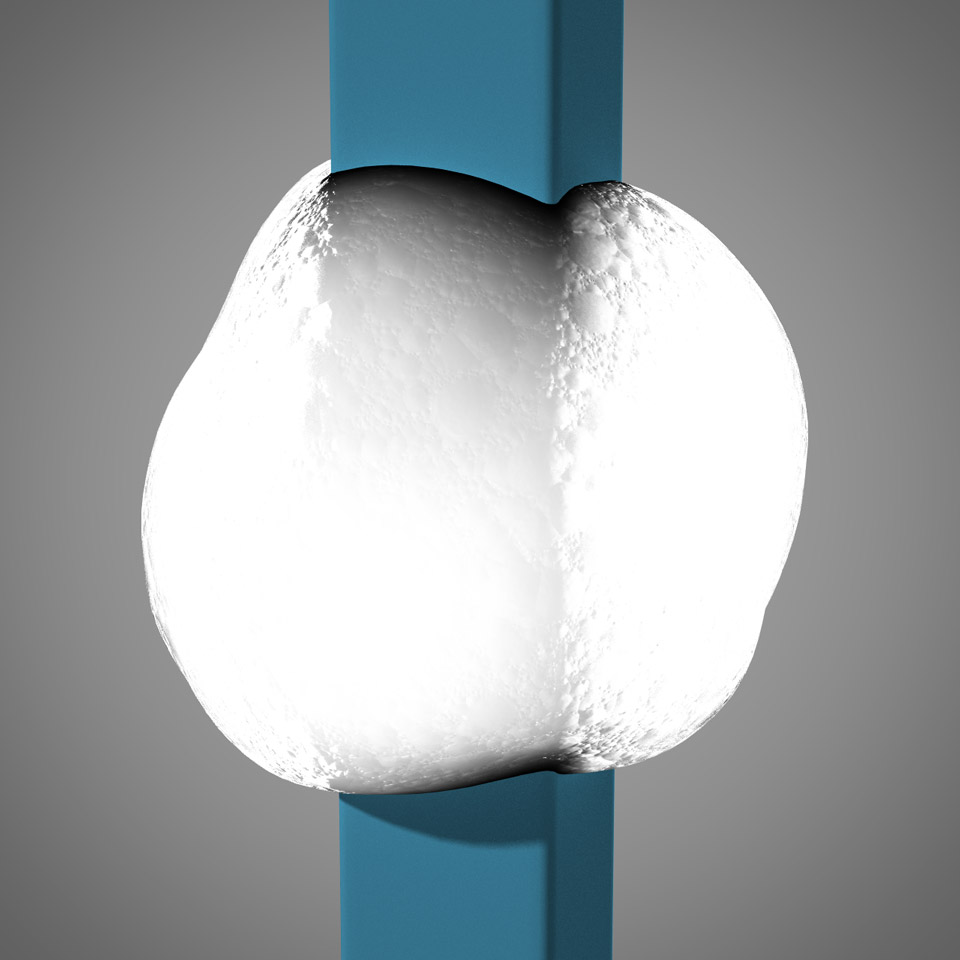 Ignoring the normal map on the surface, as you can see, the closer the white ball is to the blue pillar, the black it is. This image is using Lightwave's thickness node. If one could input it in a Blender Mix Shader factor, it could control transparent/diffuse values on the surface.

Blender apparently doesn't have a proper thickness node, but it has Light Paths... I took a look at light absorption shaders, but those use a B&W MixRGB directly into the color of a Glass shader, I couldn't make it work using as a factor for a Mix shader. Also the fact that we're using transparency instead of glass can be a problem.

Basically this is the situation visualized: 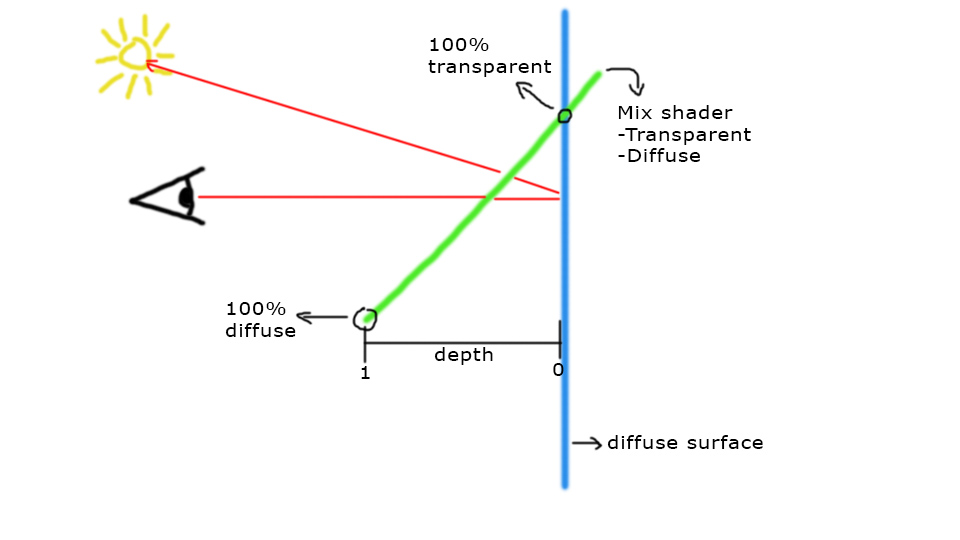 The ray from the camera hits the MixShader Transparent/Diffuse surface, it then travels a certain Depth(D) before it hits another Diffuse Surface, then bounces back through the Mix surface and to the light source. If the Depth travelled is equal or greater than D, the surface is 100% diffuse, otherwise it is a blend until D=0 where transparency is 100%.

Fortunately we have a Transparent Depth Light Path node that can be used, but I'm not knowledgeable enough to understand the math behind it. If you feed Transparency Depth directly into a Mix Shader, the result is almost good, except it is inverted (greater distance = more transparent), and it doesn't work if you flip the shaders on the Mix Shader, or if you multiply it by -1: 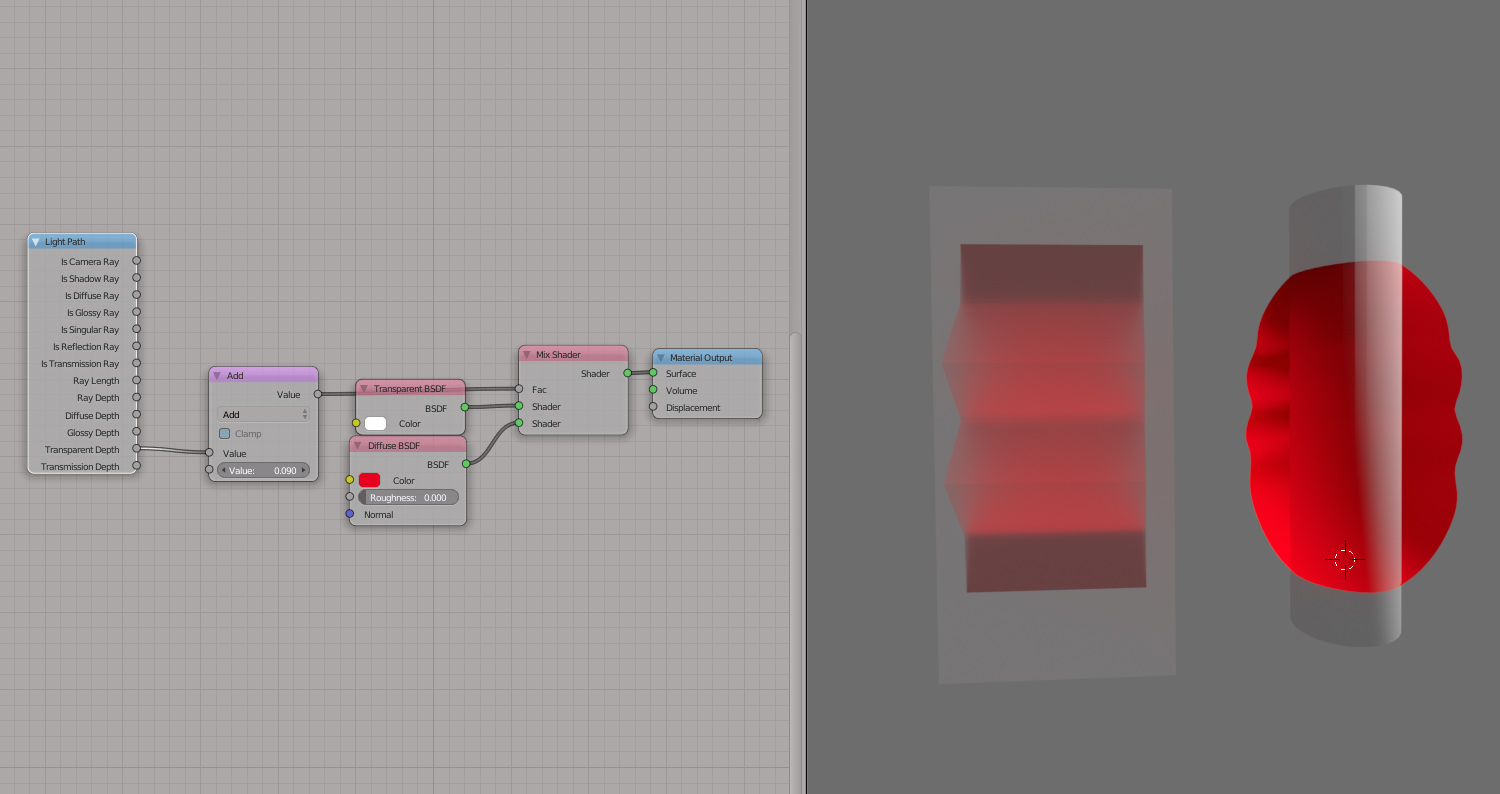 The left object kinda works (but inverted), the right object doesn't but firstly I'd be glad if even the left worked rightly.

So, is there someone with any idea how to make a thickness node on blender? This is the file if anyone is interested: 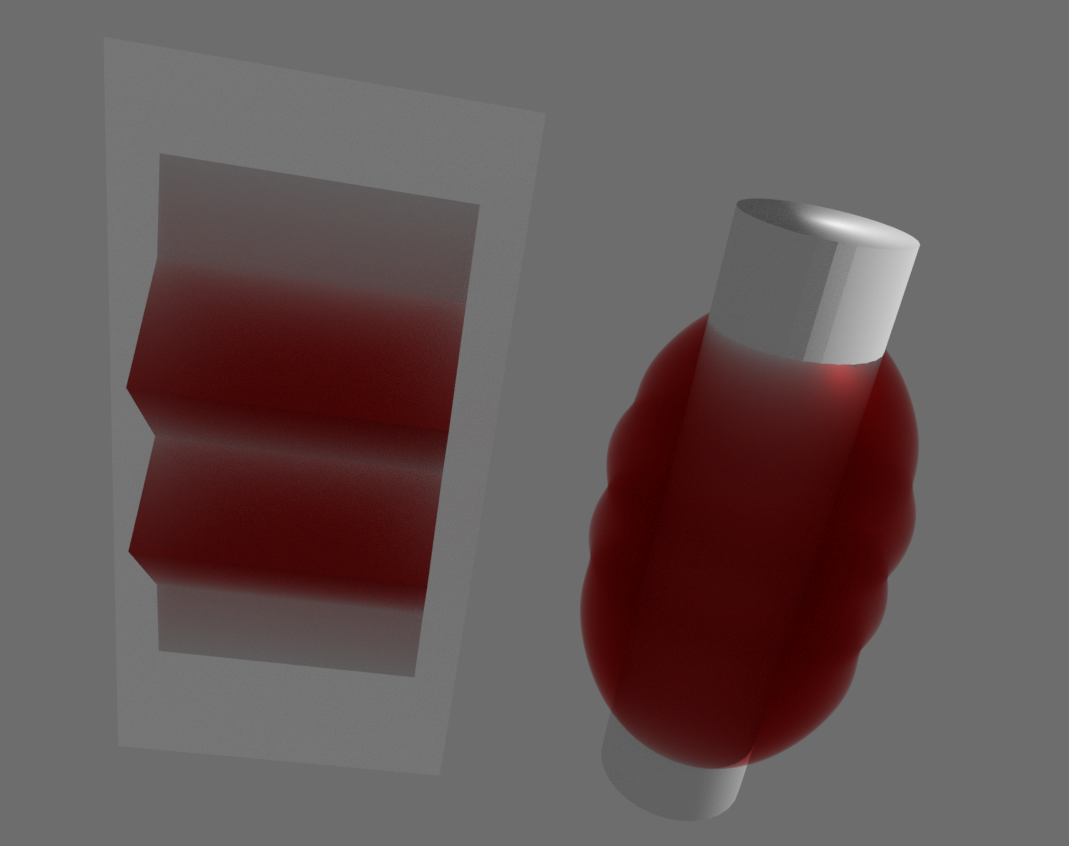 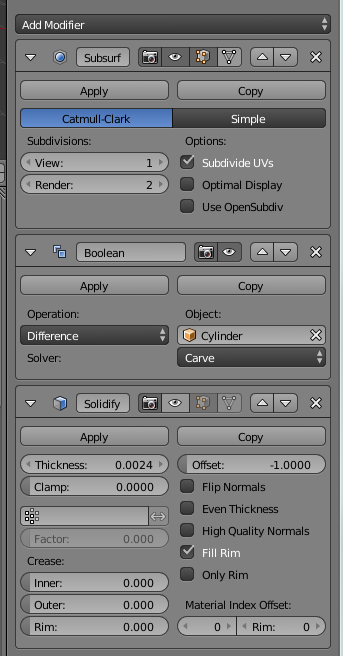 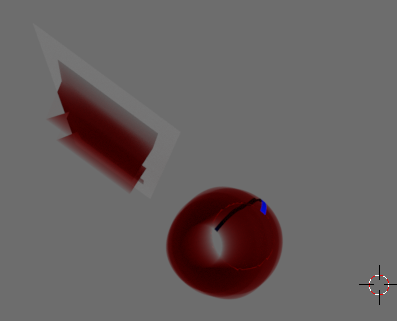 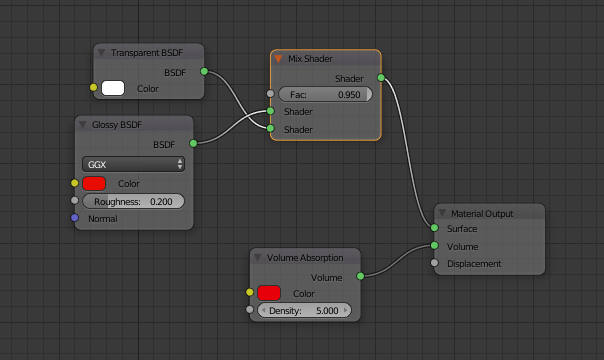 Well, after looking at this question for a related issue: Weight Paint in Cycles Nodes

It gave me the idea of using the Proximity value of Dynamic Paint to emulate thickness and since it outputs to Vertex Paint colors, one can use it in an Attribute node as factor for a Mix Shader. The object inside must be a brush, the object with the shader must be a canvas, and this is the result: 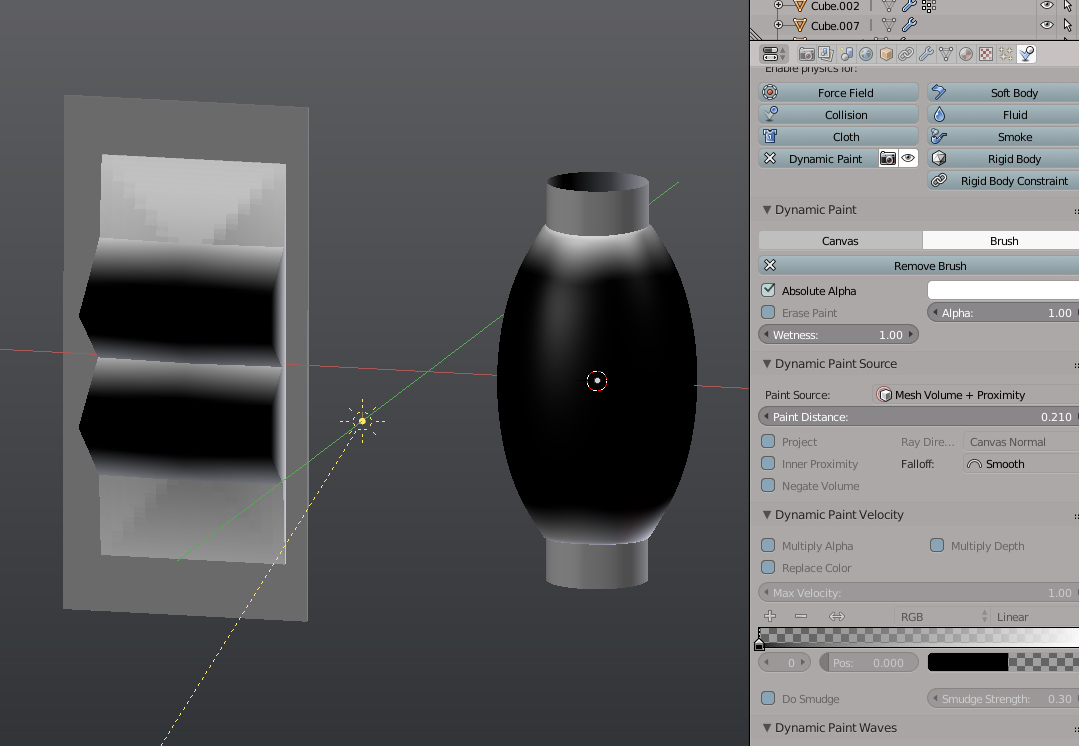 -Pro: Easy to set up and use... independent from nodes, but can be integrated by multiplying/adding textures to the Col Attribute before feeding it into the Mix Shader.

-Pro: You can easily control the "thickness" intensity using the Point Distance factor of the Brush object.

-Pro/Con: All objects that you want to be factored into the thickness must be Brushes... but this gives you control over what you want to have influence without having to mess with nodes or Cycles Visibility options for the objects.

-Con: Unfortunately you can't use this method for SELF-thickness evaluation, only for relative distance/thickness of secondary objects in relation to the surface of the primary object.

Using as a factor for Mix Transparent/Diffuse Shader, we get the expected result:

But I'm not going to select my own answer as the correct because it doesn't use nodes and light path nodes to calculate true thickness of the mesh, therefore someone may some day find a proper answer and post here. Regards!

You can use OSL for this. For example this - https://github.com/IPv6/kristallum/blob/master/blender/osl/osl_detRaycast_v07.osl

It will give you distance to next face in the direction you set in inputs, with different options. This will limit you to CPU rendering, but will do the job

Not the answer you're looking for? Browse other questions tagged node-editor light transparency shaders or ask your own question.

18
Weight paint in cycles nodes?
1
How to render depth or surface Normal maps that properly reflect details of 3D shapes while respecting the nature of materials (transparency/glass)?

2
I want Glass to be transparent where nothing exists
0
Mix shader not behaving as I expect
3
Transparent image like a decal on mesh with principled BSDF shader
1
Trying to set transparency on the viewer Node
6
Portal effect with two different hdri's
3
What are anticipated use cases for Is Diffuse Ray (Light Path Node) in Eevee?
0
Can't get simple light path nod examples to work
2
Mixing shaders causes unwanted transparency