How to reduce noise in really dark scene 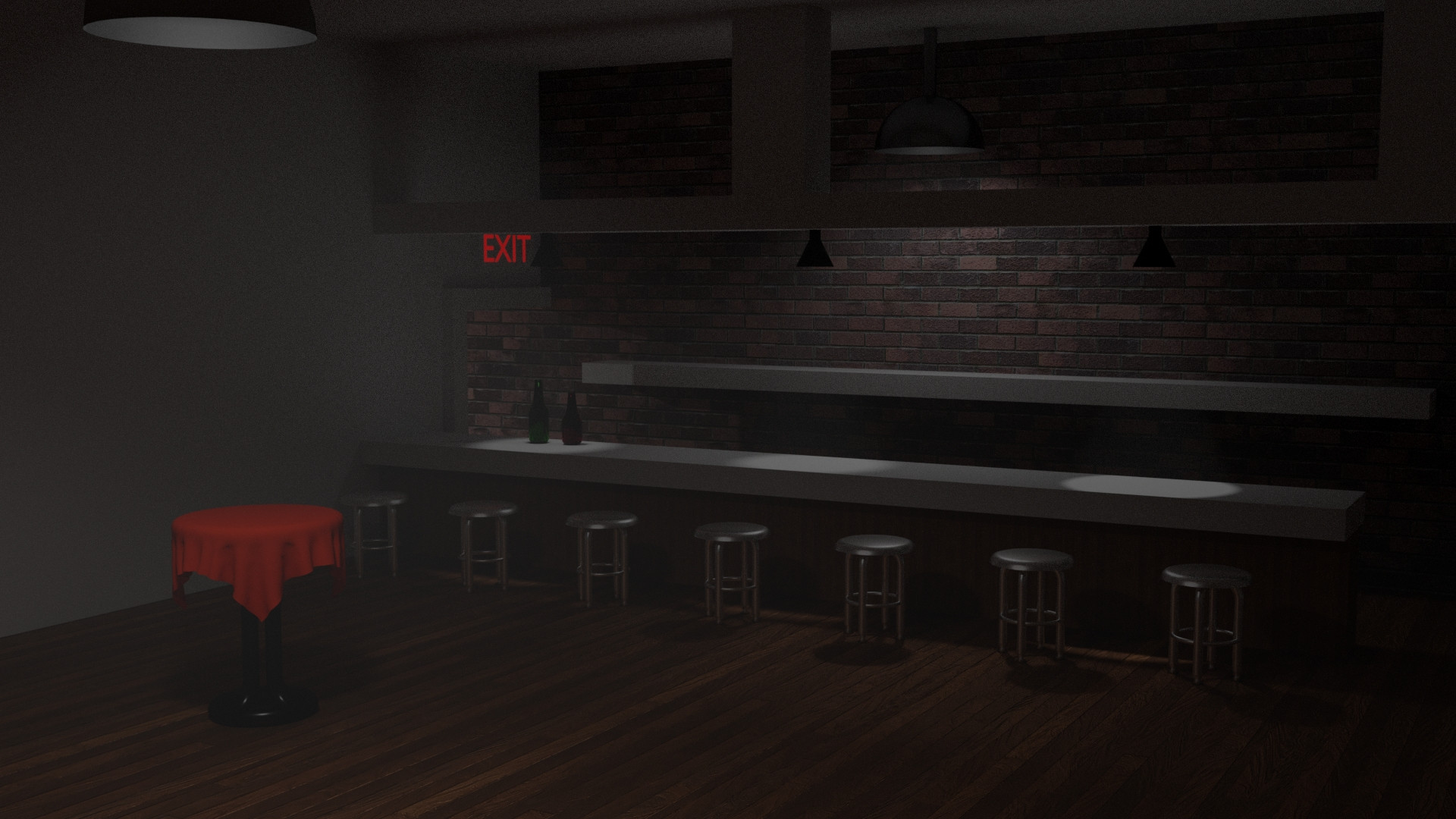 So I've been working on this one scene for a while now and I just can't get the look that I want. It is supposed to be a bar and therefore pretty dark. For some reason, nothing I do seems to reduce the noise. I can't figure out if I need to increase the number of samples (I have it at 2000 right now) or what but nothing seems to be working. I really don't want to add more light to the scene because it has the kind of feel that want but I need to remove the noise somehow. Also, I need some advice on how to make it look more realistic. I am using Filmic Blender but it only goes so far. I'm using bump maps among other things to add realism but it isn't really working. Any advice is appreciated.

Unfortunately, there's not a way to get the render less noisy other than increasing the number of samples. One of the reasons for this is that most of the light in the dark areas is coming from indirect bounces. There are a few ways to clean it up though.

First, you can use Render Passes: 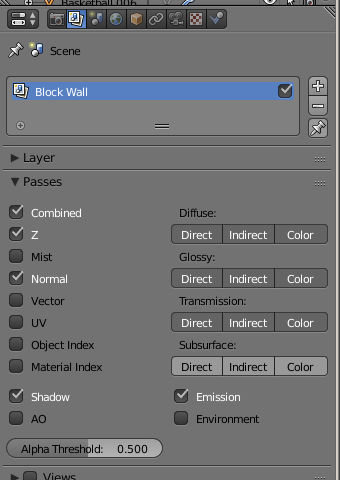 This allows you to edit individual passes such as Diffuse Indirect to try to blur the noise. This is pretty effective but it can also smear some detail if you're not careful. The main problem with this approach is the amount of "noding" you must do to recombine the passes. The good thing is that you can use Node Groups to make it look nicer [ Can I make a custom node from a group and have that available in other projects? ]

Here's the node tree for this. It's a lot simpler than it looks. Basically you just add the direct and indirect pass for each shader and then multiply it by the color pass for that shader. I made this node tree into a group: 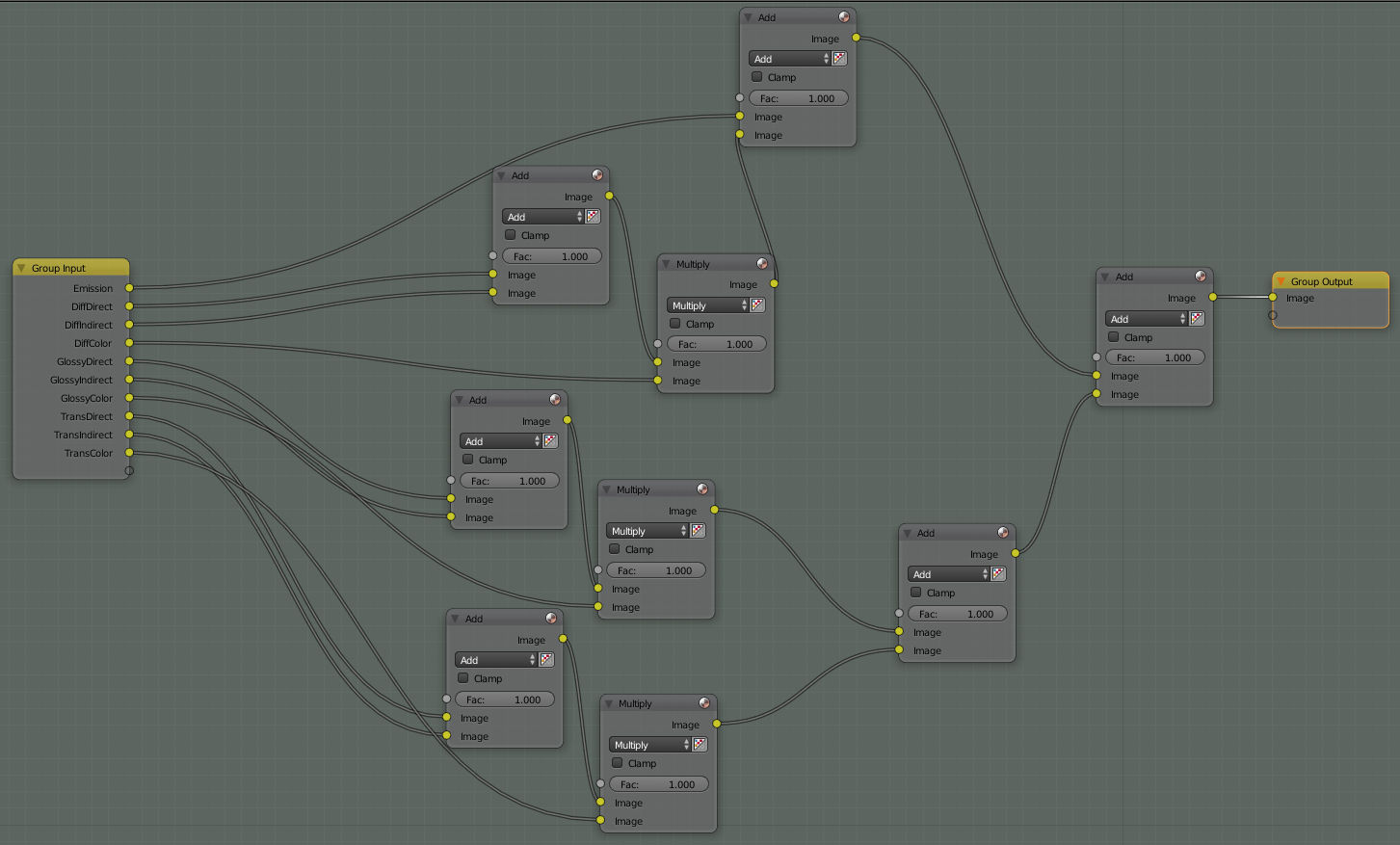 The only purpose of this node group is to combine all the passes into the final image.

Use the Depth and Normal passes to create your Determinator for the Bilateral Blur node like so and feed them into the Node Group above: 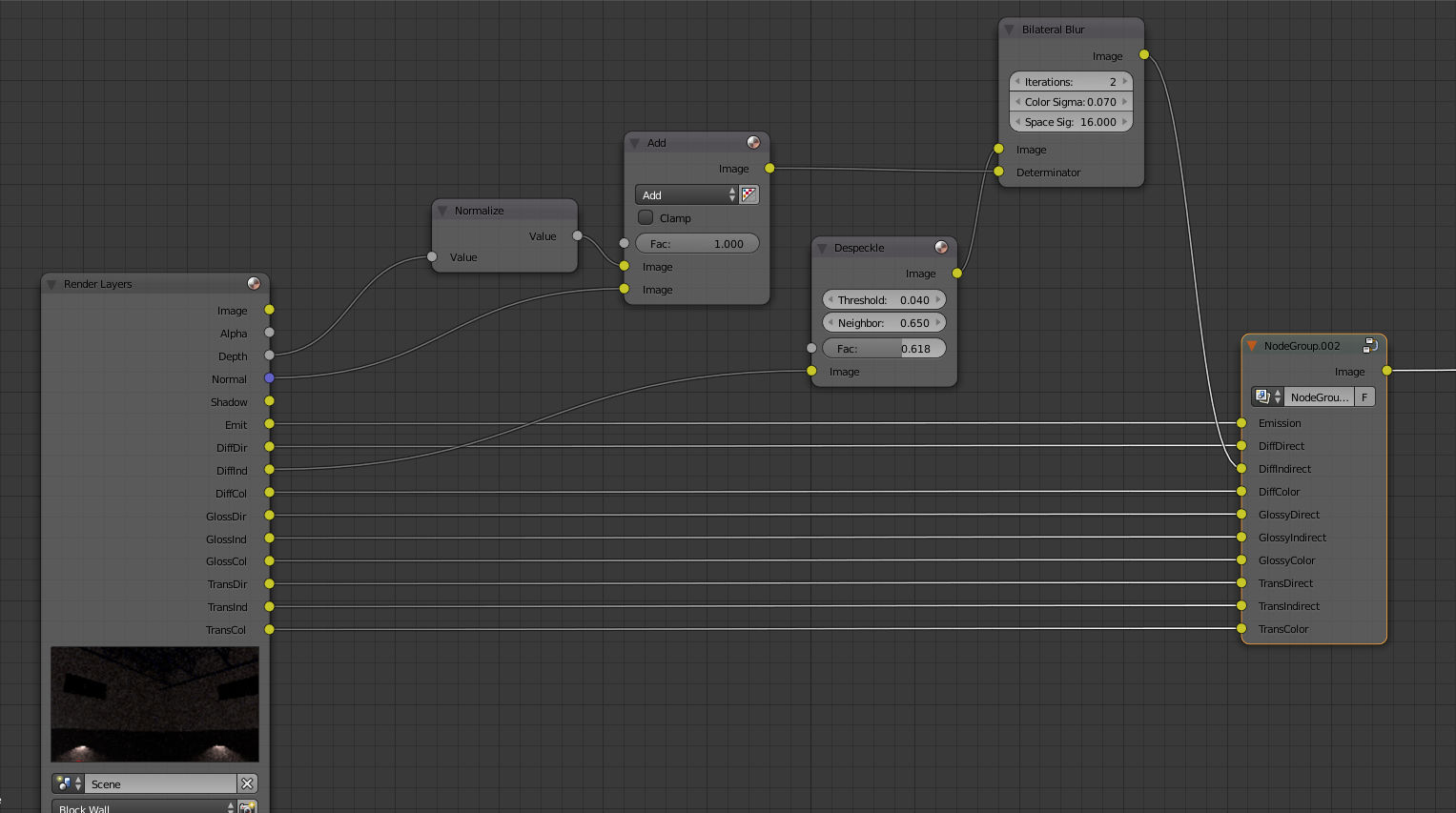 At a minimum I usually use one Bilateral Blur node for the Diffuse and Glossy Indirect passes. This method gives that most control over denoising.

However, in the 2.79 Beta version, there's a new Denoising filter included with Blender that is quite effective: [ https://wiki.blender.org/index.php/Dev:Ref/Release_Notes/2.79/Cycles ] 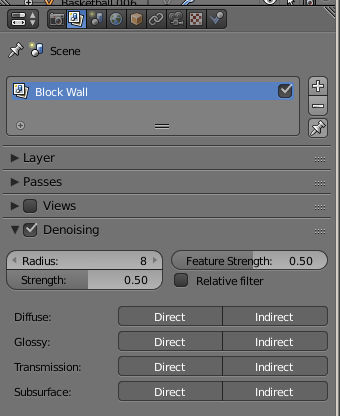 It can use your GPU to calculate the denoising of tiles, too. The problem with this method is that it's processed as it renders. So if you don't like the options you've chosen, you have to render the entire scene again. That can get old really fast, especially if you have to wait ten minutes per render. It also adds significant time to your render but not as much as a comparable amount of samples. There can also be some artifacting in glossy shaders. I've found that in really noisy scenes (like the one below) that it can look splotchy. This can probably be improved with fiddling with the settings.

Here's a quick comparison of these two methods with a piece of a scene I've been working on. It has bump mapped walls and it's very dark, so it can be really noisy. In my opinion the Render Pass version looks the best and is much more versatile. But the Denoiser is easier to use. This scene was rendered at 800 samples. I've increased the brightness manually so you can see the noise better: 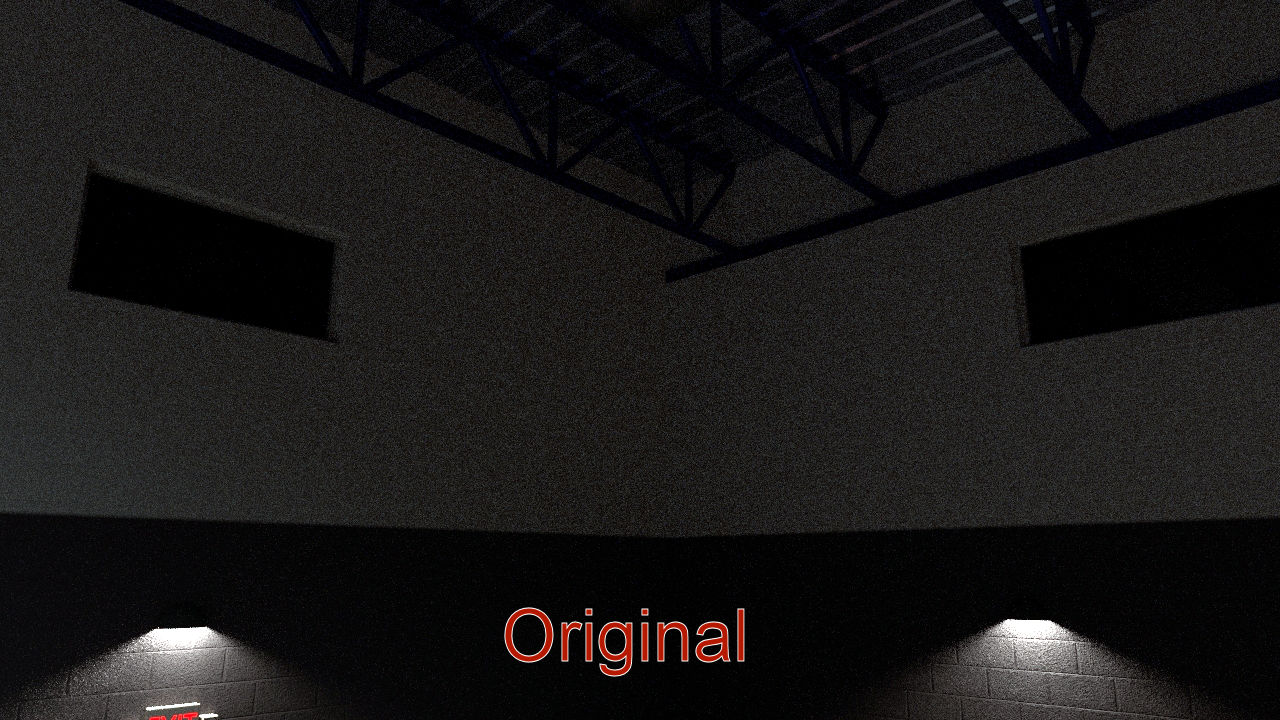 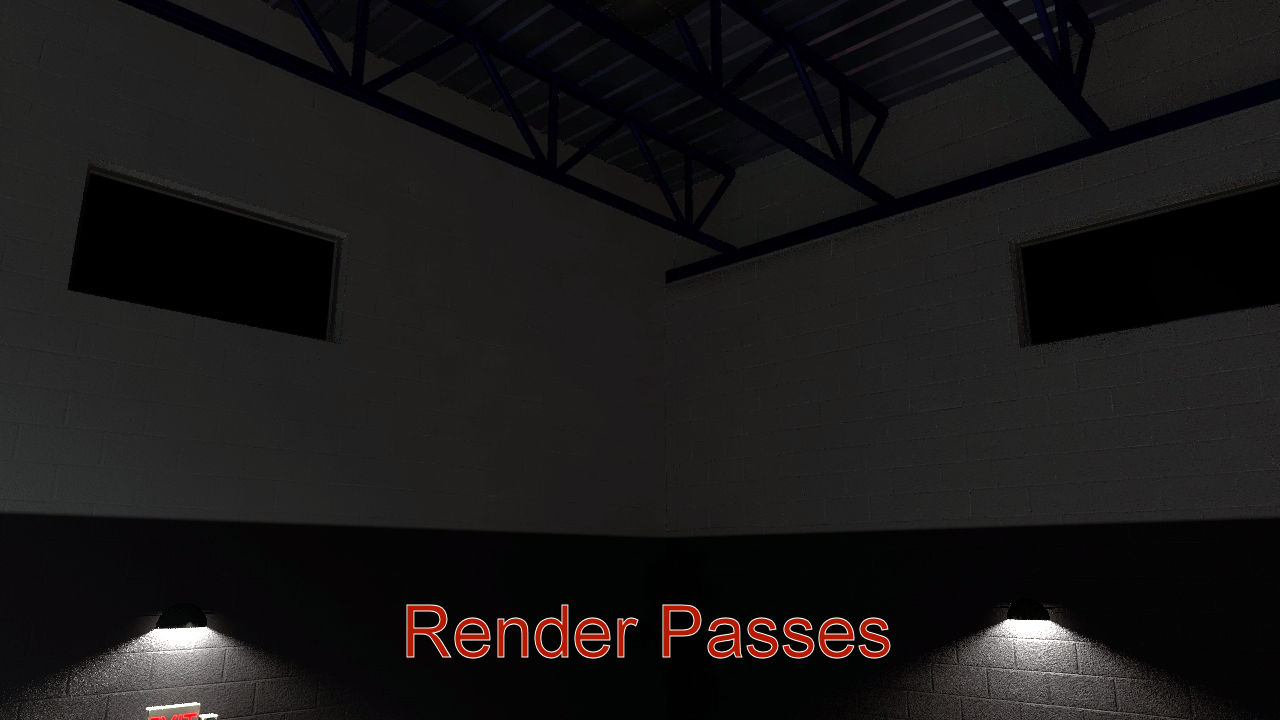 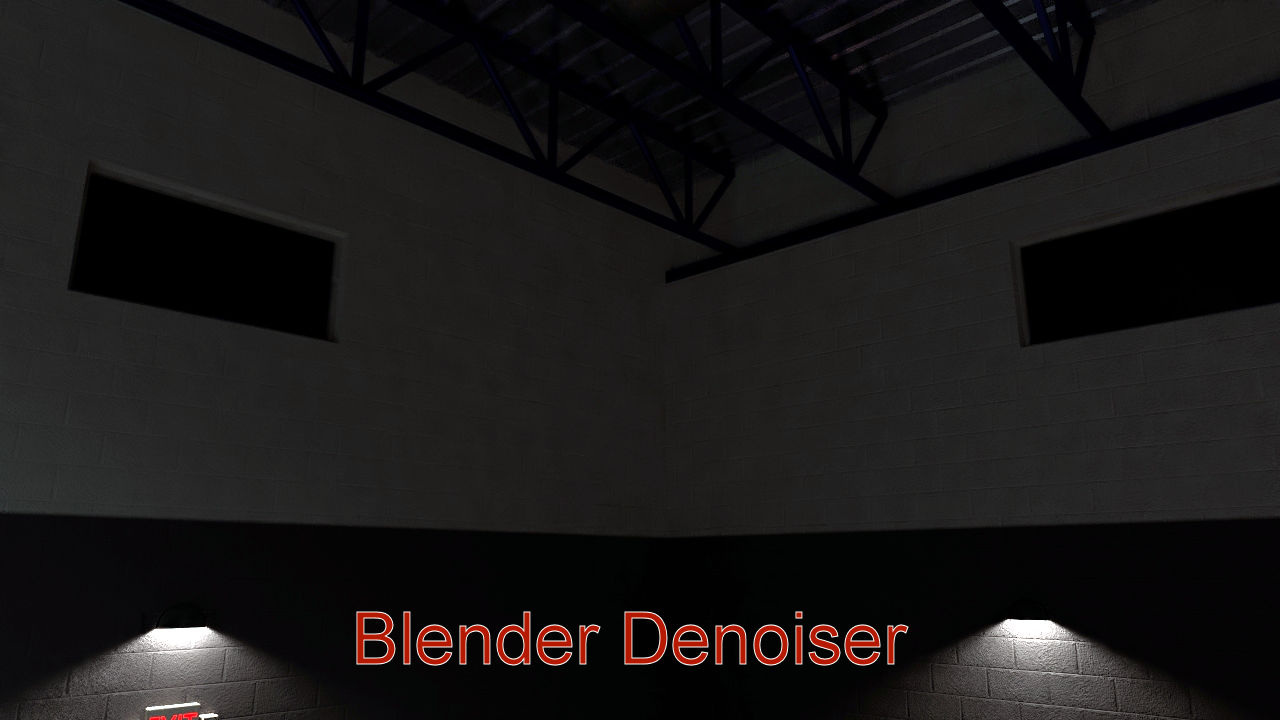 Not the answer you're looking for? Browse other questions tagged modeling noise-reduction photorealism or ask your own question.

86
How to avoid noisy renders in Cycles?
12
Can I make a custom node from a group and have that available in other projects?
8
Will increasing samples reduce fireflies?
2
Inconsistent color on rendered image
2
How can I make my interior scene better lighted?
0
How do i remove noise?

0
Cycles: noise in dark sections
0
How to detail my sword texture?
9
How to connect a circle to a grid with even topology?
1
Luxcore noisy render