Is there a way to add fake thickness to an alpha image texture?

I'm using Cycles I want to add thickness to a texture with alpha transparency like @rich-sedman do in his nice answer here:
How can I make a hexagonal grill? But this time with an image texture (jpg+mask or png/tiff) not a mathematically generated one.
It can be separated planes or solidify modifier, I don't mind, even if solidify would be better.
I've already seen things about parallax mapping but not sure it's suitable and as good as this one.

A reference image of what kind of texture I use
https://www.textures.com/download/metalvarious0044/61614
The point of my question is that it can be seen from a side angle and not looks like a paper sheet.

The answer of Rich is working, it's not perfect, no material on the volume, quite expensive and volume don't seem to work with UVmaps, only generated or object so for array it's complicate. But if it's not for a close shot it makes the joke.

There is another way - using a similar technique to the procedural hex shader defined here to displace additional Image Textures to "fill in" the faked depth. 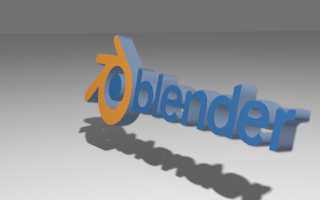 The following nodes will generate the required offset based on the surface Normal, the Incoming ray, and the 'depth' behind the image plane : 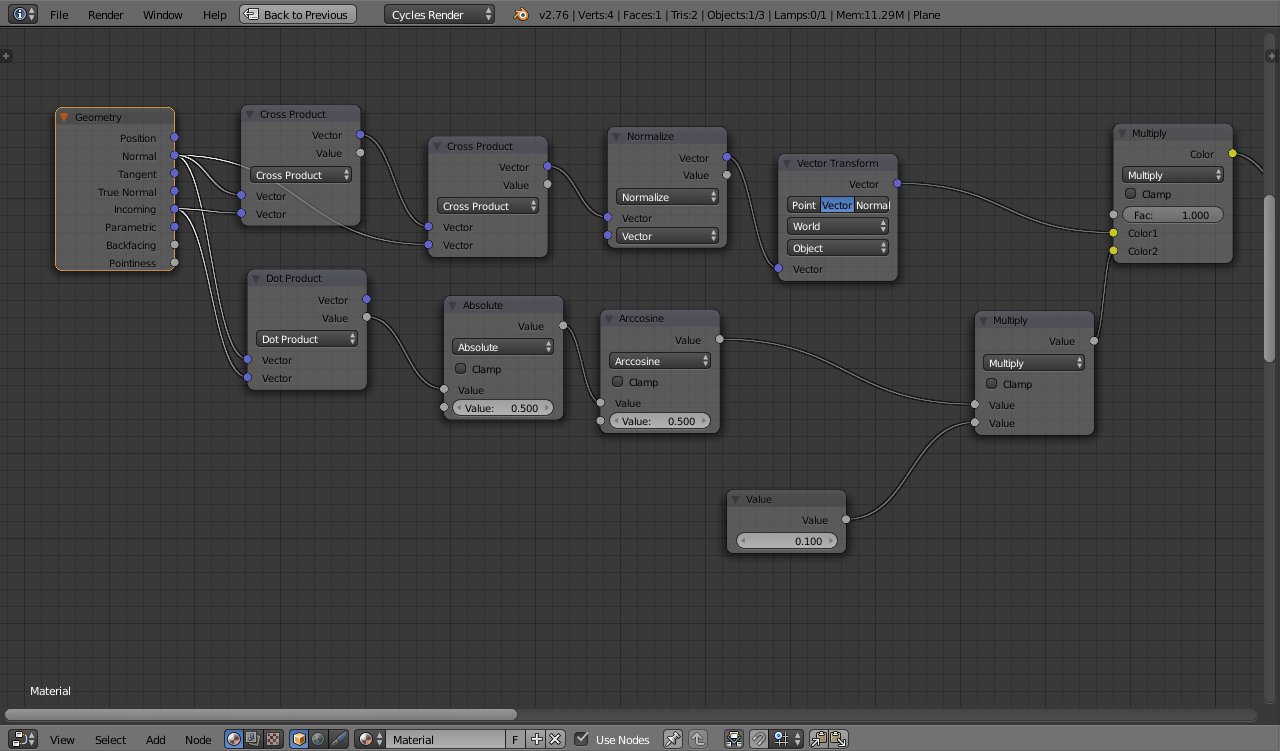 The output vector can be used as an offset to the Image Texture coordinates and used to mix between a Transparent and Diffuse shader to project a faked "shadow" where the back surface would reside based on the specified 'depth'. 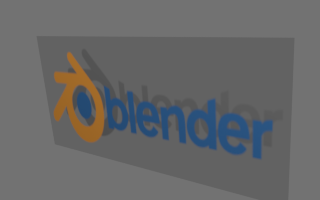 Since the faked depth is generated on the image plane (it's all one flat surface rather than additional geometry), the surface normal is the same for the projected 'edges' as it is for the rest of the image. For additional realism we need to be able to generate a faked Normal for the projected layers and for this we need to be able to detect the 'direction' of the closest edge for any point in the original image.

To achieve this, take the Alpha channel from the original image and pass it through a Blur filter in an external graphics package such as Gimp (you could potentially use Blender compositor nodes to do this and save as a separate image but it's far simpler to use a tool more suited to the job).

Passing this blurred image into a Bump node will generate a Normal for each point - which will tend to point "outwards" towards the edge of the alpha "island" for each pixel in the image. 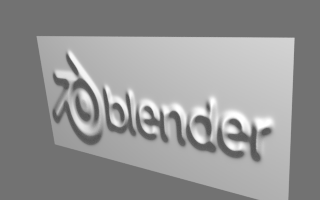 We can use the Cross Product vector math node to generate a faked normal based on the bump map that is perpendicular to the actual surface normal and is pointing in the direction of the closest edge from that point. 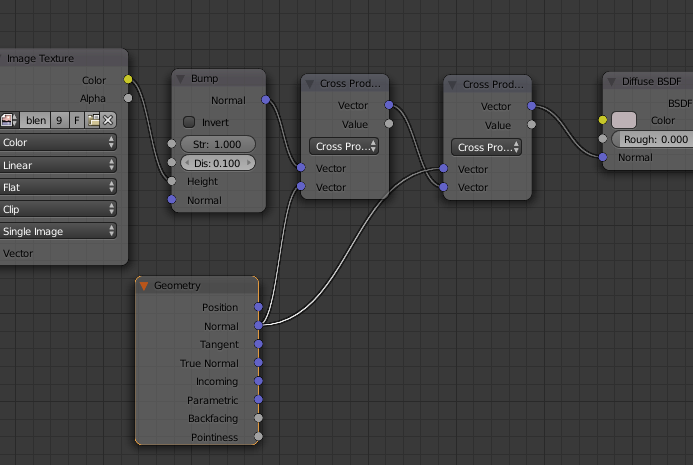 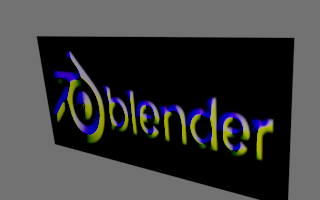 The generated Normal can then be applied to each of the 'layers' to build up into the associated 'edge'.

Note that the 'edge' will not be correctly shadowed since the 'image' is still only rendered on a single plane - ie, it will not cast shadows on itself and shadows on other geometry will be limited to rays that pass through the image plane. it will also become distorted when viewed at progressively shallower angles. Note also that this will only work be effective if the 'layers' are sufficiently close together to prevent the rays traveling too far 'into' the image (otherwise the normal will be calculated for the opposite edge). However, it can produce quite pleasing results providing the viewing angle is not too shallow. 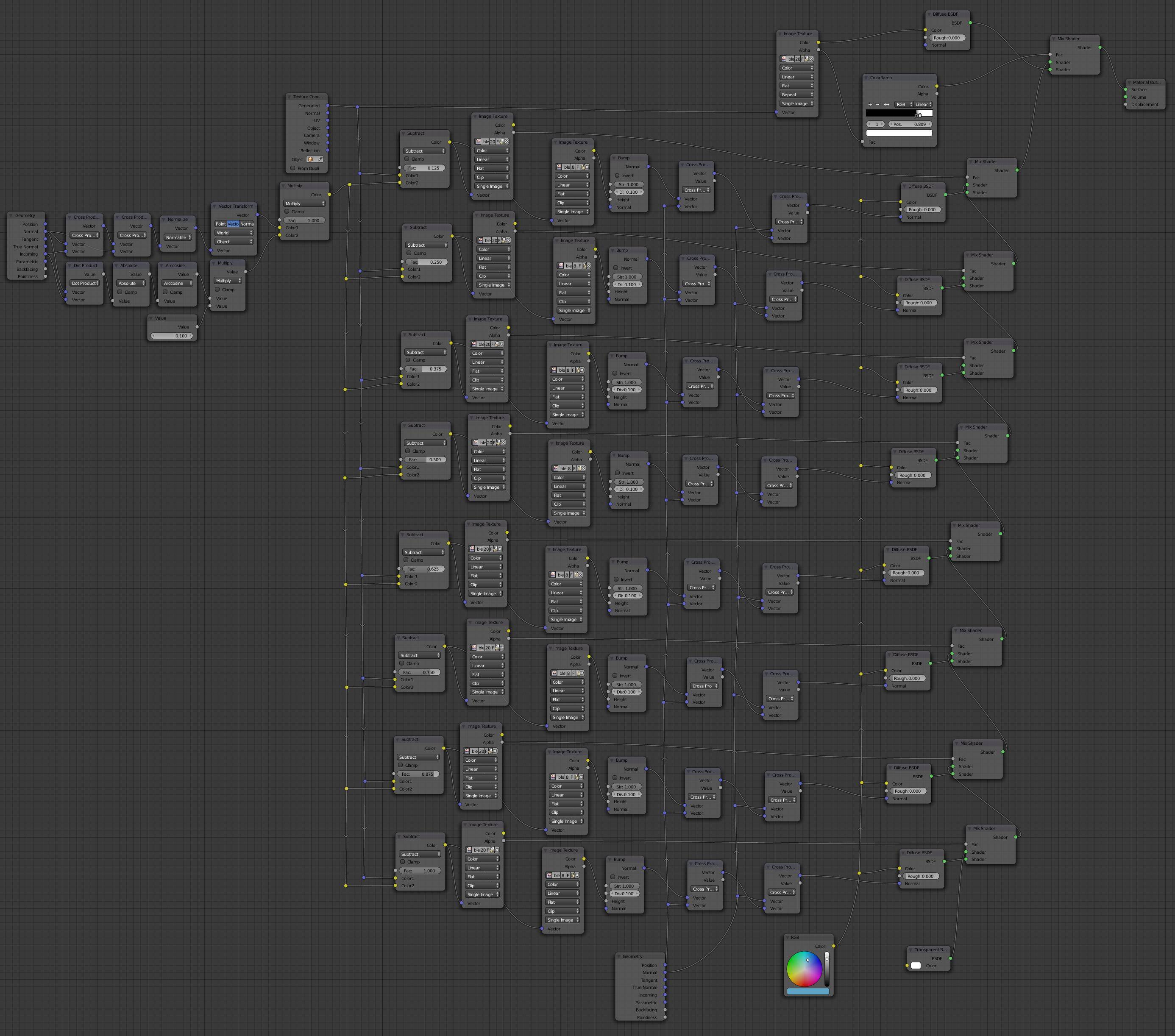 Note that there are multiple Image Texture nodes and each must be set appropriately - the 'main' Image Texture and the first column should be set to the actual image while the second column set to the 'blurred alpha' image.

Despite appearances there is no additional geometry here - the depth is purely faked and the only geometry is the plane.

While not suited to UV mapping (since the material cannot determine the scale or orientation of the face), it can be used with Object coordinates to allow the pattern to be repeated (change the Image Texture nodes to Repeat). Also, the Color of the Diffuse shaders can be fed from each 'layer' image rather than being set to a single color - so that the 'surface' color bleeds back along the projected surface. This can produce the following effect : 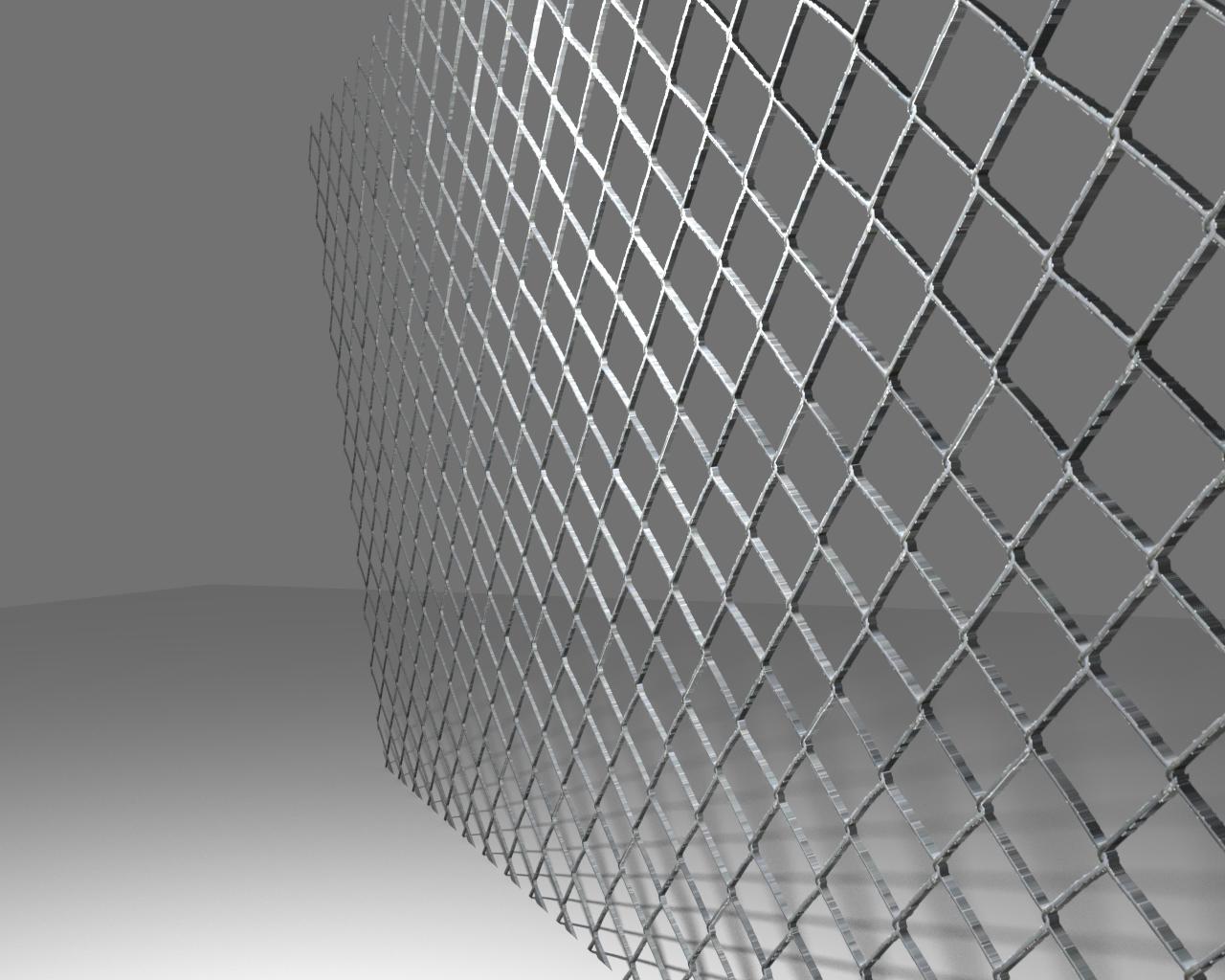 A simple solution is to extrude the image plane (or add a Solidify modifier) and use volumetrics to add the depth by driving the Density using the image Alpha channel.

Use the following material : 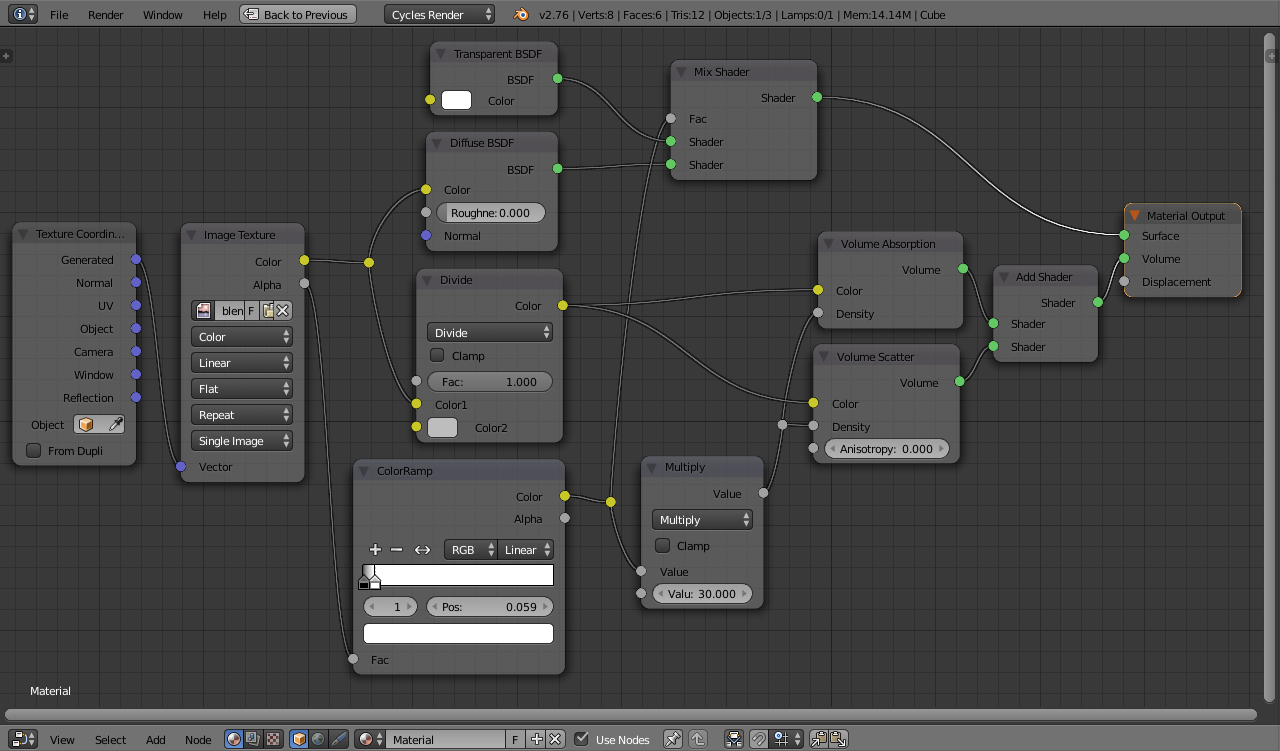 Here the image Alpha is used to mix between Diffuse and a Transparent shaders to produce the Surface. In addition, the Image is also used to control the density of volumetric Absorbtion and Scatter shaders. By using a Multiply node to increase the density the volumetrics can be made to appear more 'solid'.

The Color Ramp has been added to allow for control of the 'sharpness' of the edge by compressing the transition to one end of the alpha range. 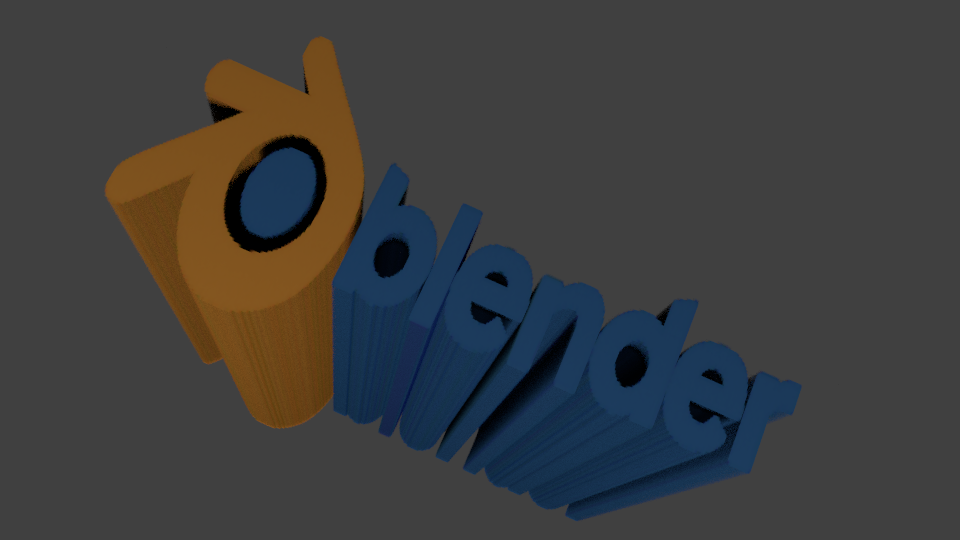 Note the MixRGB node set to 'Divide' used to manipulate the Color fed to the volumetric shader nodes. This is to allow the 'brightness' of the edges of the extruded image to be adjusted (darker Grey results in brightening of the color) - the volumetrics absorb some of the incident light which results in a much darker apparent surface so 'brightening' the color (by dividing by a value less than 1.0) adjusts for the absorption.

using bump maps can kind of do what you want, I recommend just adding a solidify modifier, that's the best path

Instead of using solidify modifier you can just add the texture to plane and extrude it.That will give you the effect you want.

Not the answer you're looking for? Browse other questions tagged cycles-render-engine texturing transparency or ask your own question.

0
How to add thickness to transparent material from image?
1
Parallax-like texture depth in Cycles
28
How can I make a hexagonal grill?
8
How to achieve a realistic material for an operative phone screen?
11
How to randomize window lighting on skyscrapers without separating each window into a separate object?
2
Wrapping a Pattern over an object
4
how to achieve nice fur effect using mainly shader instead of particle system
1
Creating a cardboard cut-out OR How do I make my geometry respect my 2d image import?
3
Solidify modifier: have a rim material that takes account of alpha
2
Is it possible to extrude a PNG image?
See more linked questions

11
Is there a way to have Cycles skip rendering alpha?
1
alpha texture madness
9
How to bake a fake SSS map (thickness map)
0
Creating transparent glass with an image texture w/ alpha channel
0
How to add Transparent texture image with another texture