I could just use:

to get the camera, but it is possible to have a scene with multiple cameras.

So if that is the case, how can I choose the active one?

The property you are looking for is 'Scene.camera'.

If you have 'python tooltips' enabled in the user preferences you can hover over the camera field in the 'Scene' tab of the 'Properties' area, to reveal the python code for this property: 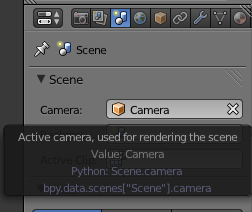 The code to access this property for the current scene and assign it to a variable is:

I use the following code:

4
How do I get a python reference to the viewport camera?
4
How do I find the technical name for a function so I can assign a hotkey to it?
5
How to change world background based on active camera?

136
How can I make a camera the active one?
0
How to prevent unused cameras from playing their animations?
1
How do I change the DoF settings of the active camera using python?
1
Active camera not working on blender game
0
Get active camera from VSE Scene strip (Animation Nodes)
0
Is there a way to align the view to a non-active camera?
1
Can I "Set Active Object as Camera" without also forcing the 3D view to change position? (Blender 2.82a)
2
Align active camera to view using python