I recently purchased a new GPU, and AMD RX550 (4GB), but in Blender OpenCL does not appear as a choice. Would this have to do with the fact that AMDGPU-PRO drivers include AMD's OpenCL? I don't think xserv is running with the public OpenCL - How do I test that?

Processor: AMD FX on a Gigabyte 970A MB with 16 GB of Ram (GPU not integrated)

Initially I installed version 2.76b (2.76.b+dfsg0-3build1) from the Ubuntu Software Center. I would see similar to the above screenshot only I would also see "CPU" as a choice.

The bummer is that I haven't seen or been able to utilize my GPU for rendering.

After reading a bunch of threads on this problem, I thought maybe it was my setup not working in that version (some had success with installing a direct package from the Blender.org website).

So, I downloaded and unpacked 2.78c from the website. When I ran blender it looks like the above screenshot. When it renders, it renders using the CPU (obviously as default), because I can see with my System Monitor the CPUs being pegged.

I'm still bummed though, because I can't use my GPU to render. Any ideas on how to get my system and blender to communicate? (that's my hypothesis...)

I (re-)downloaded and installed the latest drivers from AMD: AMDGPU-PRO Everything appears to have installed correctly - AMDGPU-PRO, OpenCL, etc...

However after install, I still have no choices

Any ideas on next steps?

Thanks for any help! --Dave

I know this isn't the answer you're looking for (it's not one I'm happy with either), but, at the moment—even two months after you first asked…

While the card supports OpenCL natively and works in Windows, it is unclear when fully working (i.e. including OpenCL) Linux drivers will be released.

A comment on the AMD Community boards suggests that there is a working internal build that has been tested against the RX 550 as of August 11th, 2017. When this will be publicly released is unclear as of now. In addition to the evidence I've linked to supporting this conclusion, I've personally confirmed that the issue is specific to the RX 550 by dropping an RX 580 into a Ubuntu 16.04.3 system with identical drivers without any issue: the RX 580 shows up and works fine with OpenCL, the RX 550 continues to not be seen as an OpenCL device.

I've also personally tried the oibaf open source drivers, but have not been able to get OpenCL working on the RX 550 with them. This weekend I will give that another try using Ubuntu Zesty instead of the 16.04 LTS, now that I have an RX 580 to help act as a control comparison case.

I would suggest posting in the above linked thread or contacting AMD directly, referencing the linked comment, and asking for the internal build that is working for OpenCL on the RX 550. Otherwise the only available options seem to be either waiting for them to be released publicly, getting a different graphics card, or not using Linux with the RX 550 for now.

{1}: Supporting evidence (in addition to the thread linked in the second paragraph):

Today I found a solution in installing drivers for this video card here https://forum.ubuntu-it.org/viewtopic.php?t=639965

I ran the installation with options (previously - removed the driver): 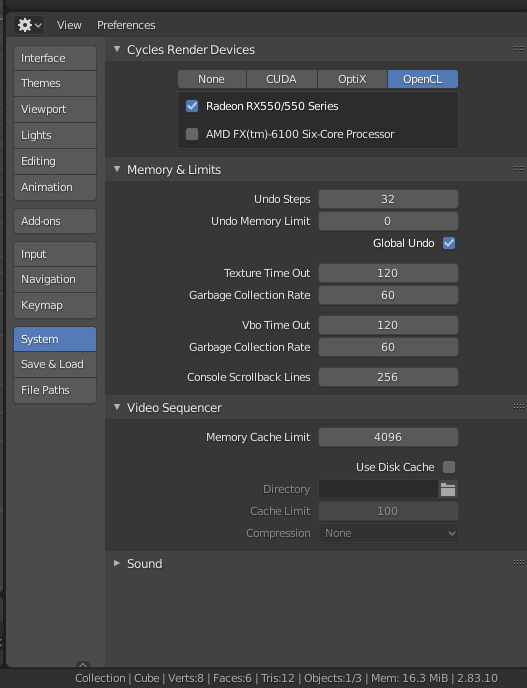 I'll add that after a reboot, I was unable to start a user session ... I had to go through the following steps to restore the system:

Not the answer you're looking for? Browse other questions tagged cycles-render-engine gpu opencl or ask your own question.