How to add different Gravity velocity for different objects?

I am trying to make an animation on Cycles render and this is what I have on my scene:

I have a ball that rolls from a high platform until it goes down and hits 11 dominos and make them fall, I want the dominos to have a higher value of gravity than the ball so they can fall on the floor a little faster than they currently do, how can I do this?

I'm using Physics, Both the dominos and the ball are active "rigid body objects". I even tried to increase the gravity value on the "scene" control panel > "rigid body field weights" which it does increase the speed of gravity and makes the dominos fall faster (what I want) but it also changes the gravity of the ball and makes the ball roll too fast and looks unnatural, not what I want.

I've not used Cycles but the "Damping" setting in the physics properties (see pic) will slow down a particular object where it's used and leave the others alone. The cube has damping applied (bottom right in the settings) and the cylinder doesn't. You can see that they're falling at different rates.

The view is from underneath the grid - 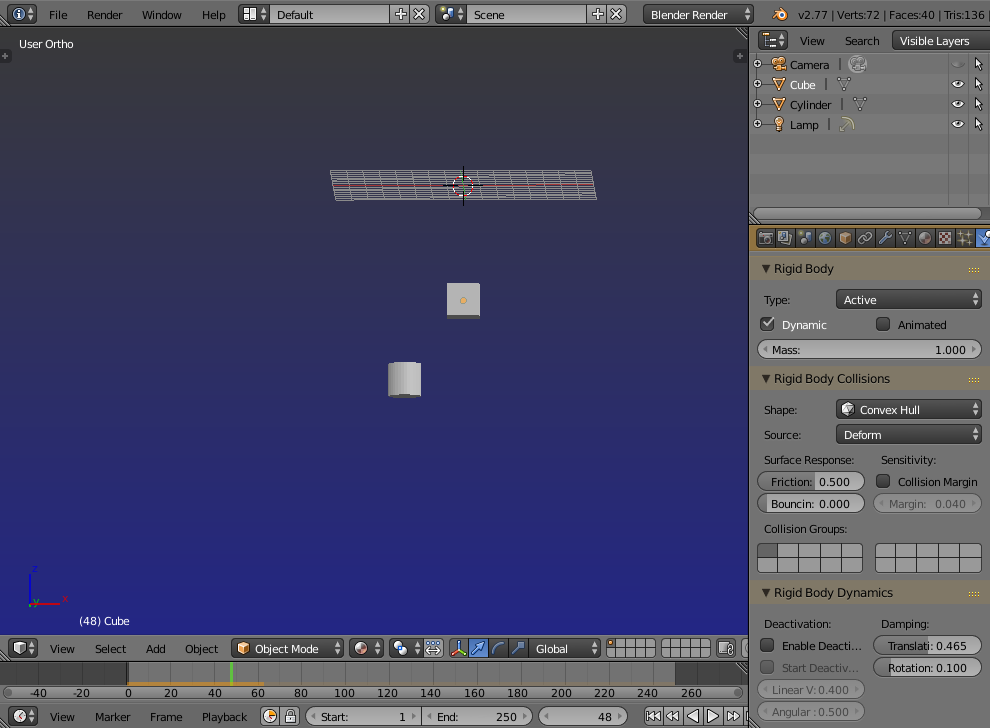 While Edgel3d's answer seems to produce the desired effect, it's not physically accurate (although, admitedly, having two separate groups of objects experiencing different gravity wouldn't be physically accurate anyway!!) - it's more like adding 'drag' or 'air resistance' to the objects so as to slow them. If you run the simulation for longer you'll find that the 'slowed' objects will reach a terminal velocity where they no longer accelerate as they would if the force was purely gravity.

To achieve a physically accurate different force of gravity you can disable the 'world' gravity and implement the equivalent force using a Force field. Since Fields only affect objects on the same render layer you can easily control which objects are affected by which force.

Firstly, disable gravity by either disabling it on the Gravity properties panel or by changing the Gravity Field Weight to zero.

To mimic the gravity, add a Force field (Add, Force Field, Force). The Force pushes any objects away from wherever you place it - position the Force above all objects so that it acts to push objects 'down' (as would have occurred with 'normal' gravity). In the Physics properties panel set the force Shape to 'Plane', set the Strength to '225' (this seems to mimic the standard gravity of 9.82) and ensure the Falloff Power is set to 0 (this will result in no falloff - so the force acts the same regardless of distance). Since the Shape is a Plane rather than a Point, the force will always act in the Z direction of the Field (ie, 'down'). 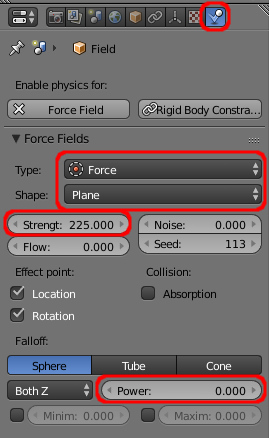 You should now find that the objects obey the differing gravity depending on which render layer they are placed.

5
How to make small objects fall properly with rigid body?
2
Moving a ball forward, mechanical force
3
How do I make two objects pull toward each other in a zero-gravity scene?
3
How do I prevent rigid body objects from falling down before they are hit?
0
Blender Rigid Body Physics Trapdoor Effect
1
How do i prevent active objects keep moving when they fall down on the passive?