How do I calculate how much of a object is covered in a 2D image?

I'm using code from here: Save the 2D bounding box of an object in rendered image to a text file

To calculate a bounding box coordinates for an object (say a human) in a rendered image. That works great.

I want however to expand this to be able to calculate how much of the object that is covered by other objects in the rendered image. 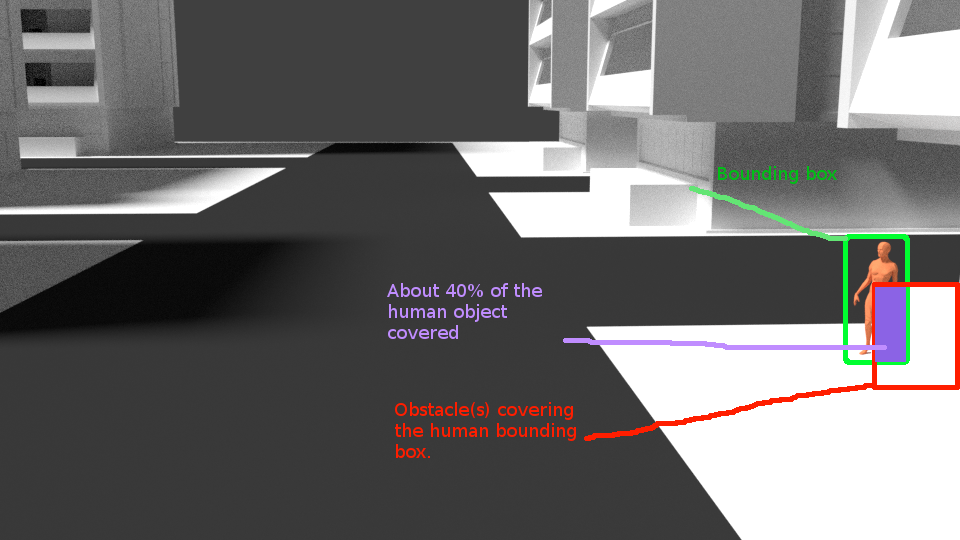 I want to do some research in AI/deep-learning as to try to train a neural network in detecting various computer generated objects in traffic. So any help here would be adding to that work.

In the "Render Layer" / "Passes" panel, enable the Object Index pass. You can then give each object, like your human object, a unique index using the "Pass Index" property in their "Relations" panel.

Once you've given each object of interest a unique "Pass Index", you can inspect that render pass after the image has rendered. Each pixel will have an RGB value equal to the "Pass Index". You can render twice, once with the obstructing objects and once without. Once you've done that, you can find your answer simply by counting counting pixels in each case; dividing the obstructed count by the unobstructed count will give you the unobstructed percentage.

I was doing exactly the same thing, but my scene takes a lot more time to render, on top of my old machine to work on. So I used to check all the vertices of all the objects, if they are visible or not. First I would parse a single object in my scene, and check how many of the vertices are visible to camera(assuming the objects isn't occluded even a bit), second things is out of all those vertices, I did check how many vertices are actually visible(not occluded by other objects). All this is done using just a simple 2d array, which I also described in another question, here.

=> fraction of the object visible in rendered image =

Note: This approach might not be the best, but for the objects which has a good amount of vertices unlike cube/cuboids, this approach would do just fine, as it did for me. As for the computation expense, this is cheaper in comparison of complex scene rendering multiple times because of too many objects existing in it.

Let me know if any of you find any issue in here, it would be better for me as well to know any other flaws in this approach as I am still working with this.

12
Save the 2D bounding box of an object in rendered image to a text file
6
Create a segmentation picture with each object class rendered in different color ?
1
How to locate object parts of rigged object visible in camera

3
Mesh silhouette as a polygon or pixels surrounded by the silhouette on the rendered image?
1
2D- Bounding box around human model with sub meshes and armature
1
Refresh Viewer Node's image data when pass index of ID Mask node has changed in python
3
Body part recognition inside of blender using a neural net