How to add a realistic flare

How do I turn the little emission sphere into a realistic flaring sun. (This piece is animated with all the planets rotating and revolving) 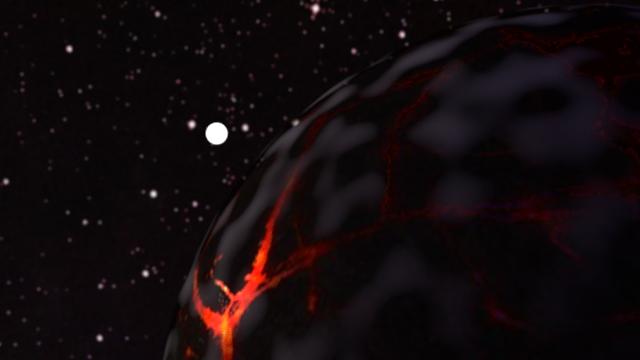 animation materials nodes
share|improve this question
asked May 26 '17 at 5:09

You can use the Fog Glow in the compositor to produce a nice glare for the bright sun as follows : 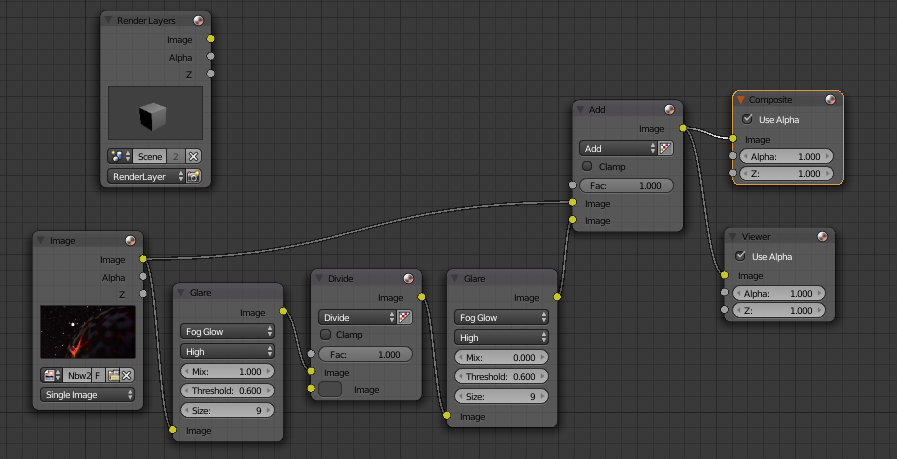 I've used two levels of the glare node which isn't ideal (as it's not the most efficient method) but it provided a simple means of filtering out the 'bright' elements of your original image (since it's a JPG is doesn't include brightness values > 1.0 - in your actual scene you could use an emission material with, say, emission strength of 20 or so - this way the threshold on a single Glare node can do the job!) to be multiplied up by the 'Divide' node (by dividing by a small value - eg, divide by 0.05 to multiply it by 20).

The final Glare node then adds the actual glare on those elements picked out by that first stage to produce something like the following : 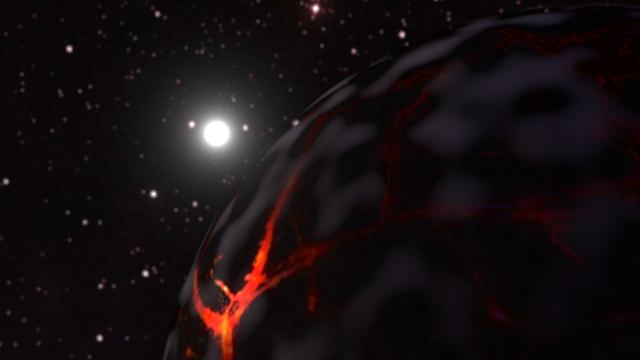 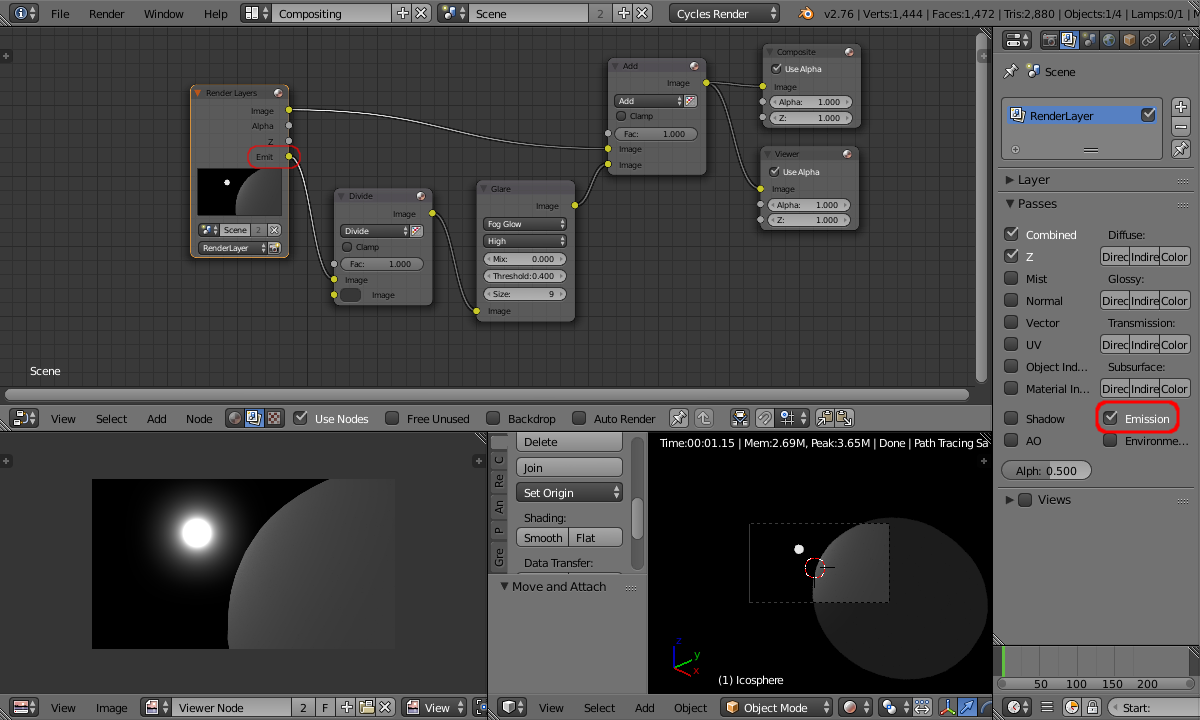 You can vary the glow by adjusting the Divide node and/or the Glare node or by varying the brightness of any emissive material in the scene. If you want to exclude certain emissive materials from the 'glare' then you can use the Glare node's Threshold to filter those out - ie, setting it to, say, 5 will result in any emission at a strength of less than 5 not being subject to glare while any greater than 5 being subject to the glare.

An alternative is to apply the glow directly to the rendered Image and to rely on the emission strength to provide the glow. This makes for a simpler compositing set up but you lose the ability to easily adjust the glow effect - you would need to adjust the actual emission strength rather than being able to simply adjust the "multiplier" (Divide node in the previous example). 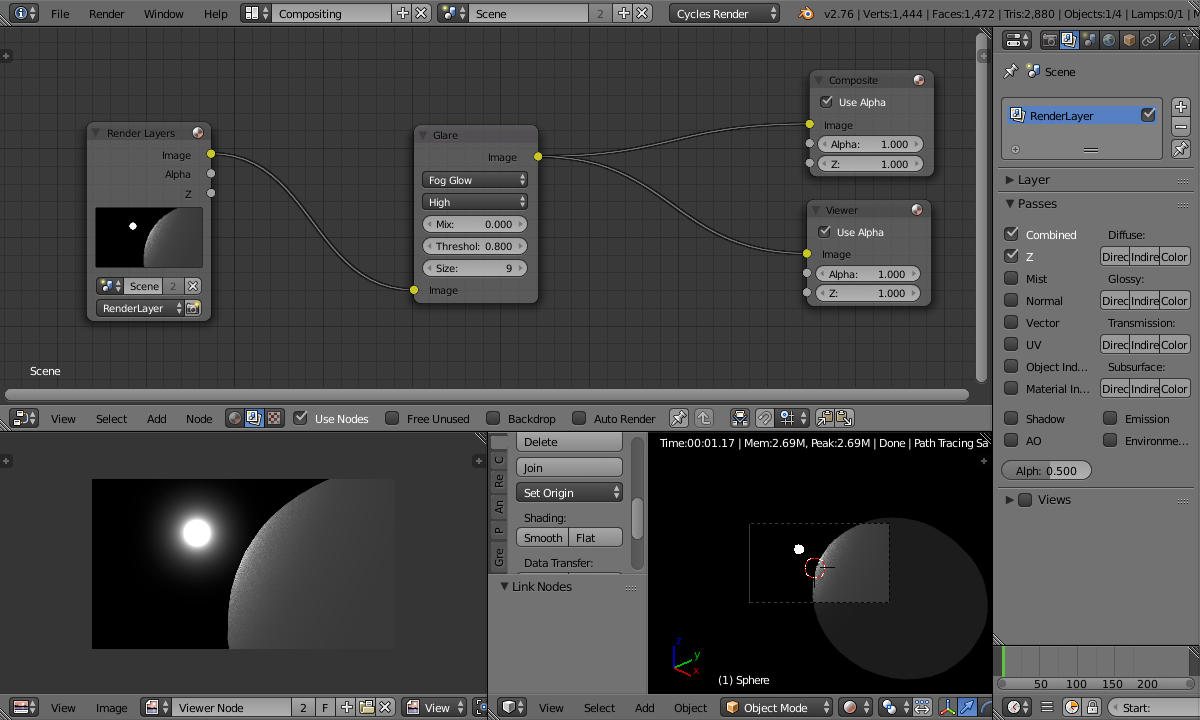 You can do that in the compositor. Select a Glare node(Filter>Glare).Change the type to Simple Star.Decrease the threshold to almost 0 or 0.You could increase or decrease the fade depending on your choice.And to make it look more like the sun,maybe change the emission color to a slight yellowish.

Not the answer you're looking for? Browse other questions tagged animation materials nodes or ask your own question.

0
Adding a Glow Effect to a Specific Material

1
How can i make more realistic lighting/materials
1
Animating a masked sphere with “star” particles
0
Create a realistic puddle?
4
Stage light flare effect
4
Does anyone know how to rig a truck/trailer so that the trailer follows the truck in a realistic way?
4
Cycles Realistic Lighting & Emission material
2
How to get realistic dirt on metal?