How can I improve the realism of my pencil texture lines in freestyle?

I'm using a charcoal image texture to make my cycles freestyle lines look as though they were drawn by hand with a pencil. My inspiration (and the source of the charcoal image texture) was the teapot file linked on this page https://wiki.blender.org/index.php/Dev:Ref/Release_Notes/2.71/Freestyle 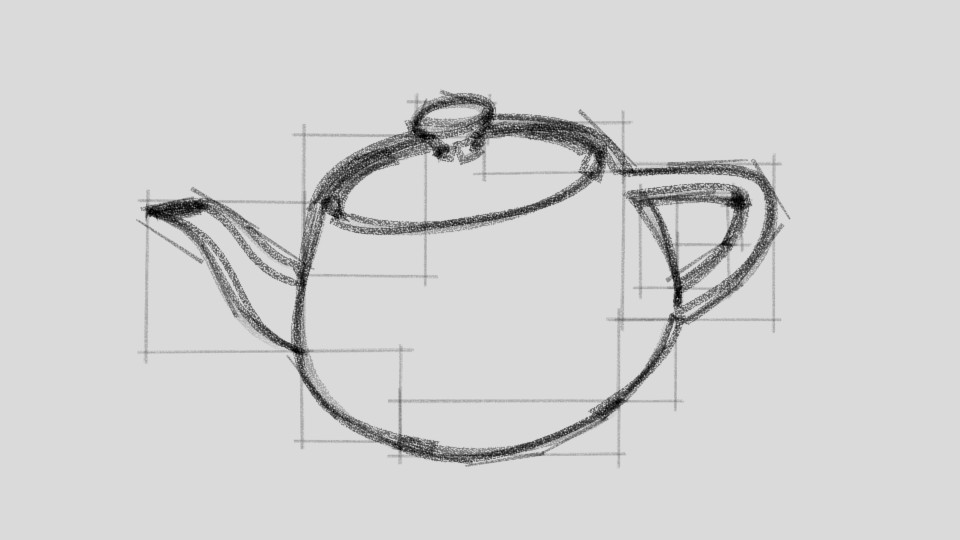 This is the charcoal image texture:

The concept works okay when you use multiple rounds to go over the same area a few times, but when I try to draw a single line it looks a bit crappy, with the repetitive nature of the texture very apparent. 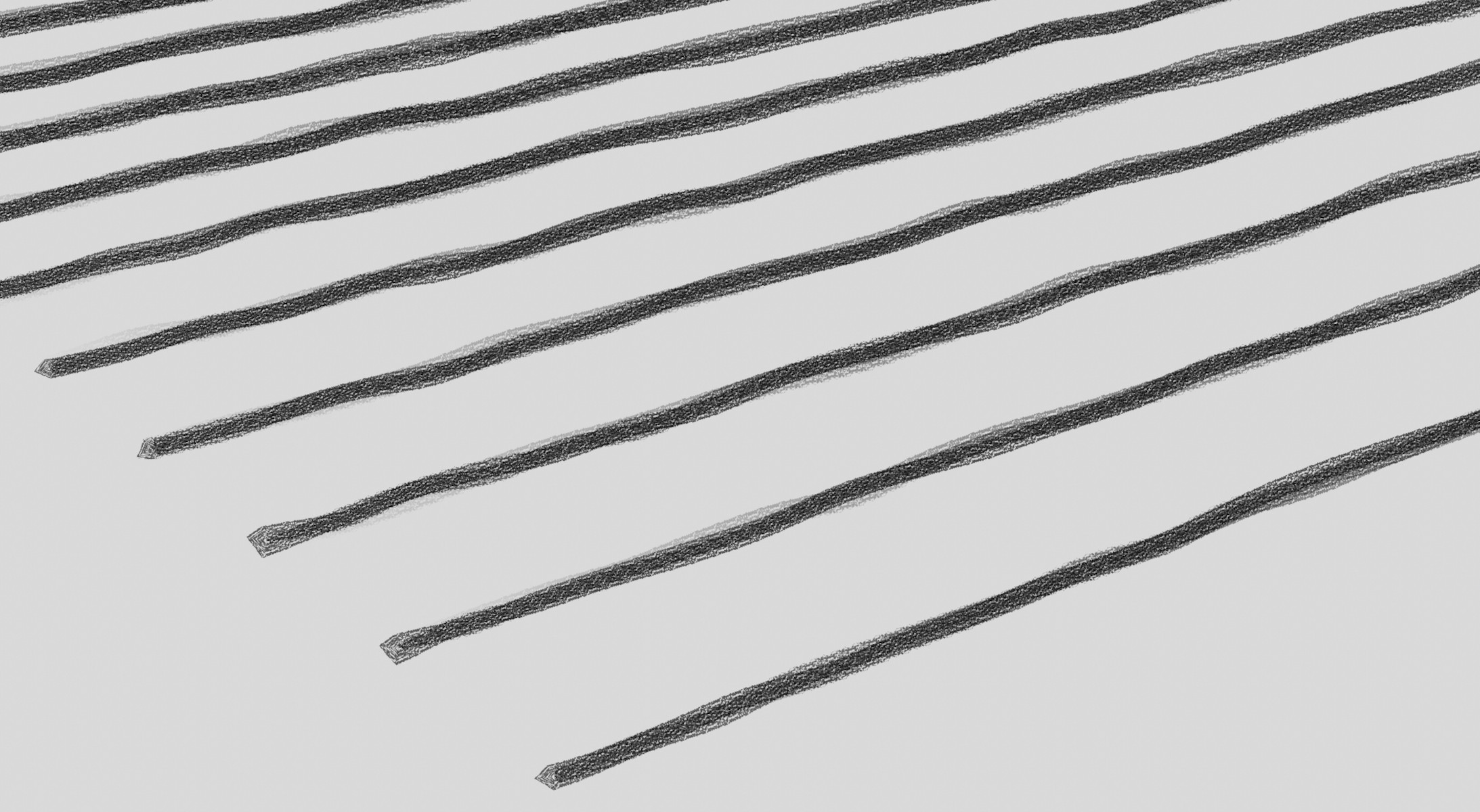 Single round (which is what I'm after, ideally): 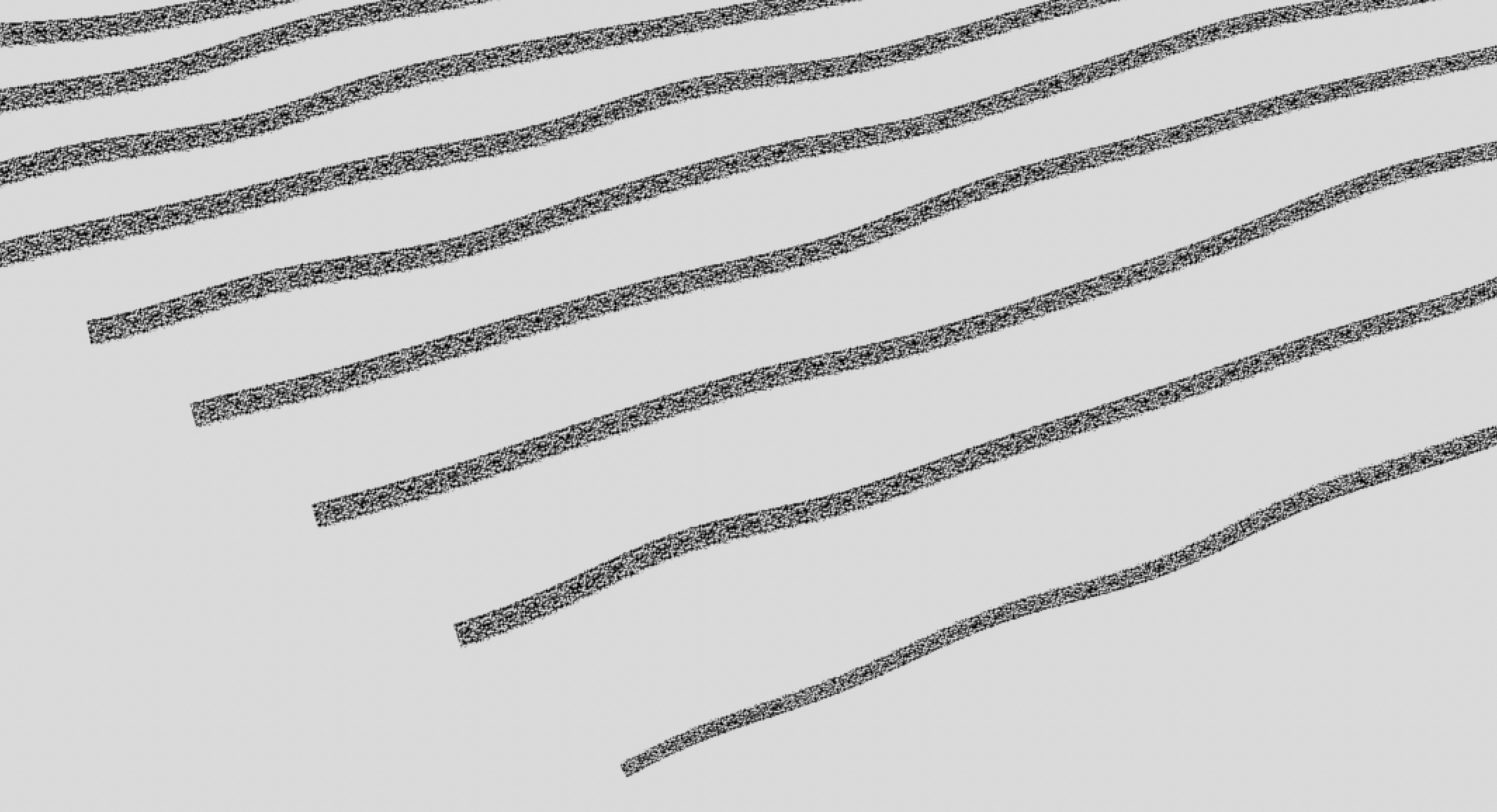 I'm wondering if there's a secret to getting more realistic single stroke pencil texture lines in freestyle? Do I need a better texture? A more random way of having it repeat? Or something else? Hopefully things have moved on in the three years since that texture was created and used in the teapot model.

If for some reason the charcoal texture doesn't appear in the file, you can grab it from my post.

p.s. I'm aware of this question How can I use pencil style strokes in frestyle? but those answers simply point me towards the files I've already referenced.

Update May 29th 2017: Spurred on by Mr Zak's answer below I made another version with multiple rounds of lines and a little randomness. While I realize I can get close to what I want with this method (as the layering of the textures creates more randomness), I'm still interested to know if there's a way to improve the realism of the texture on a single stroke. But in the meantime here's what I achieved with multiple rounds and the settings I used. Perhaps it will prove useful to someone else. 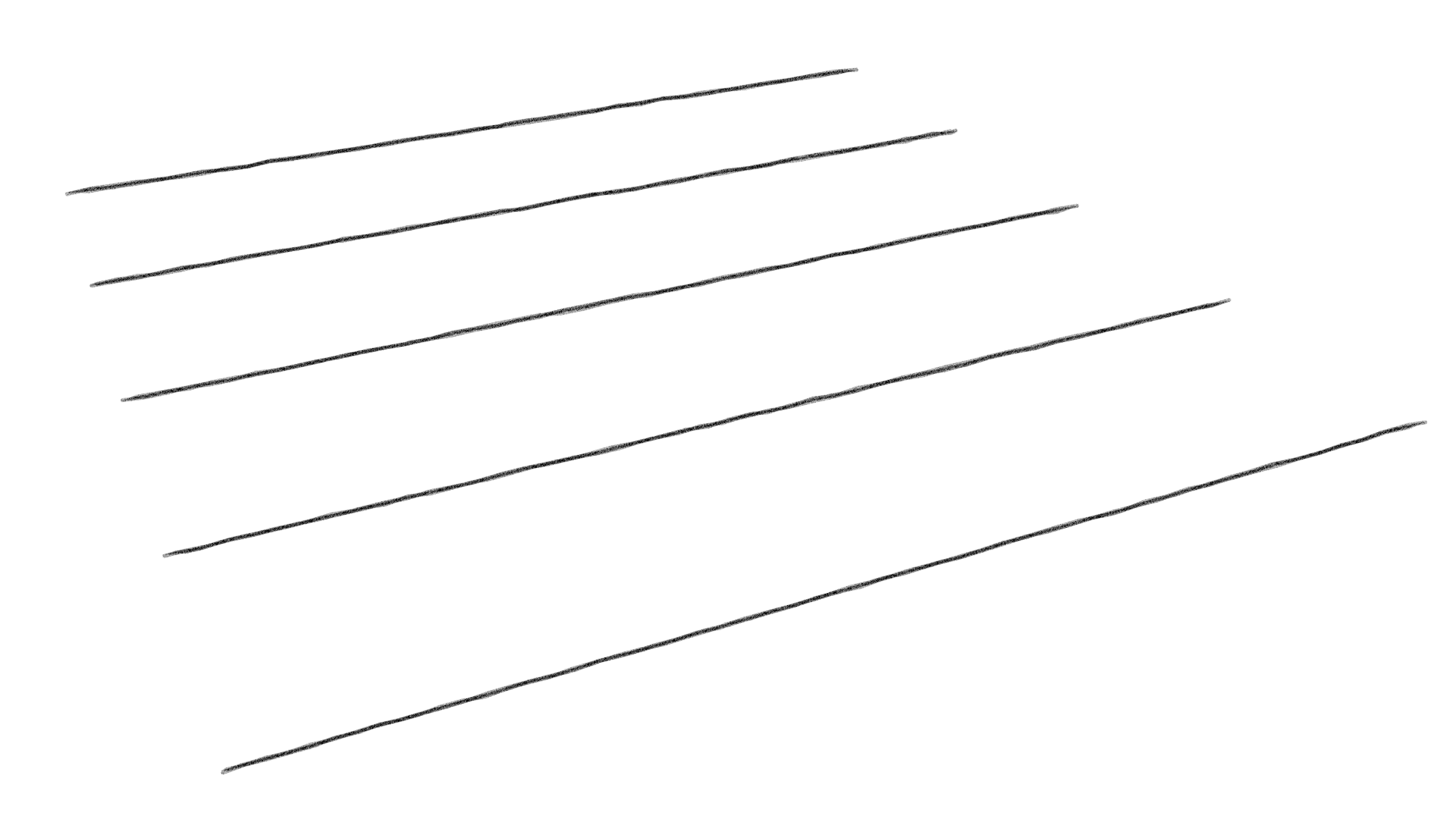 Close up of one line: 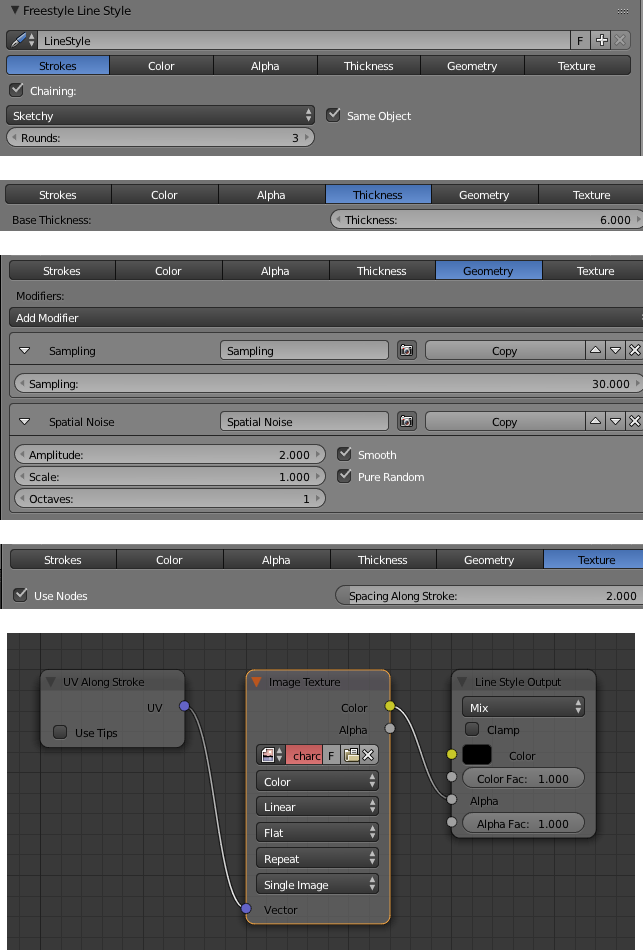 Update 2 May 29th 2017: Since someone asked, the project I'm working on is a series of line-based maps that I'm hoping to render as though they were drawn either in pencil or in pen. I'm still fiddling around trying to work out the final look and feel of them, but knowing if I can achieve the pencil or pen look is a part of that.

Here's an example of where I am so far: 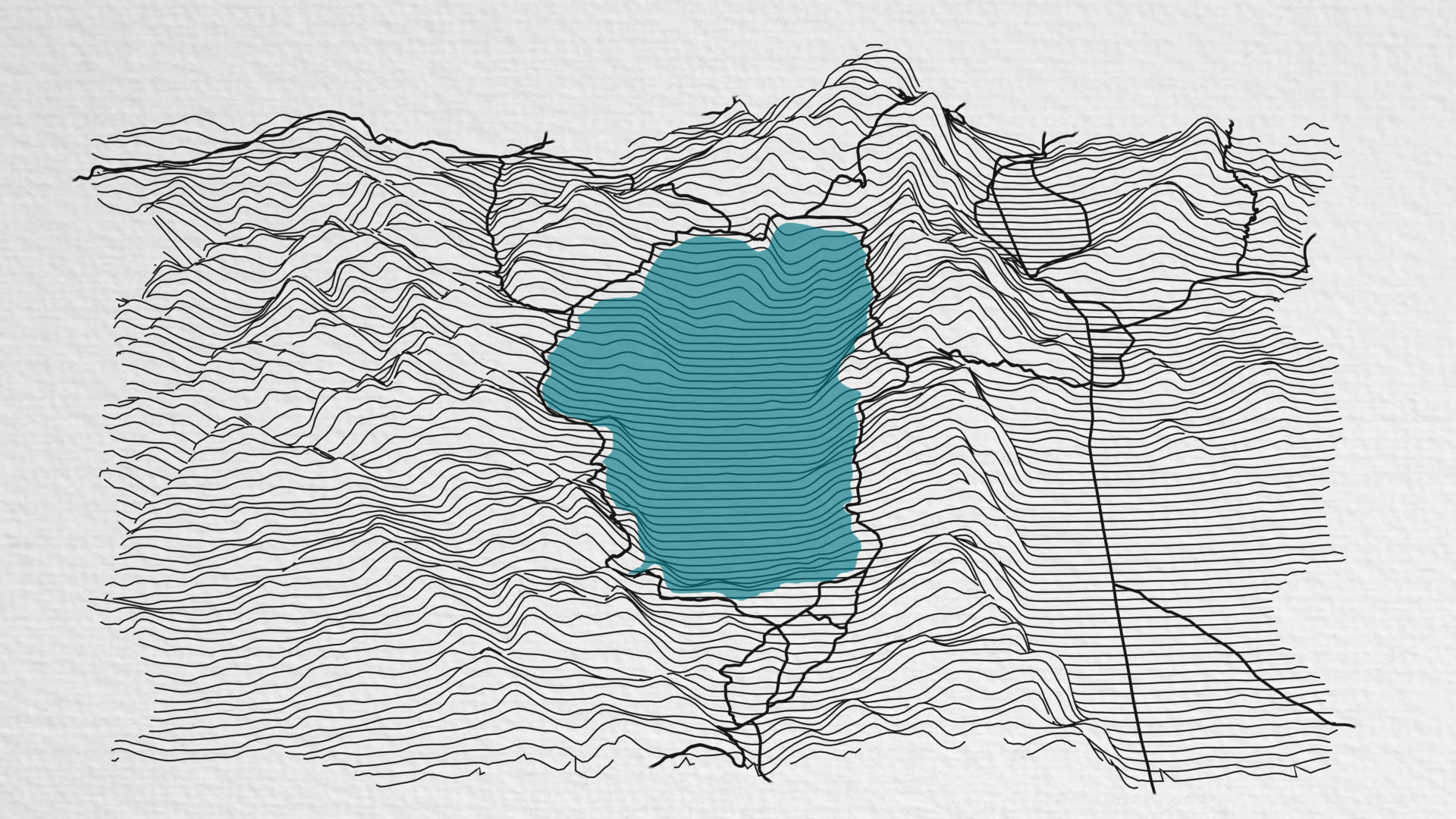 As you can see the lines representing the terrain already have a good deal of randomness and wiggle in them, so that's why I was concentrating mostly on the texture of the stroke. It might be that the lines end up being too small to even register a texture, but as this is an ongoing discovery I wanted to understand the full extent of my options.

According to the wiki article Textured Strokes the Use Tips option is available when Along Strokes mapping is used:

Along Strokes Means that the texture will be drawn along the stroke length, making it possible to mimick pencil or brush marks.

However by default it won't really make any much difference:

The option depends on spacing between strokes mapped to the geometry:

Along Stroke mapping depends by the LineStyle spacing parameter that can be found in the linestyle settings. It sets how much the texture will be stretched along the stroke length. Higher spacing means less tiling.

It can be found in the same place where strokes are set up to use texture, Render Layers tab > Freestyle Linestyle rollout > Texture panel: 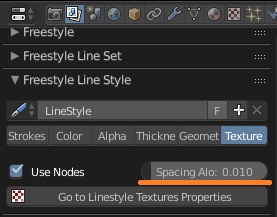 Spacing was set to 5

The effect however is still a bit off as its thickness is not varying and the stamp still is present.

To correct that don't use thickness of 20; in fact less than 10 will be enough. For convincing and effective results better to let it draw with thin line and repeat it 2 or more times; that will simulate effect of graphite or a pencil strokes more nicely. This is the result wil Stroke effect decreaed to 6:

Now some repeating pencil strokes would add a bit of "realism" to the image. With Repeat set to 3 it will be already more or less good. But to add even more to that in the Geometry panel add Spatial Noise modifier.

What the modifier does is it varies strokes created by the Repeat option. Amplitude option will increase or decrease how far away the repeated lines are from original; Scale adjusts the scale of repeated detail (if it was at 15 you'd get step-like corners around the line).

Smeared chalk like effect can be created with Along Stroke modifier added to the Thickness panel. According to the manual it applies gradient along each stroke while substituting original values of the line. To make lines more fat and smeared Use Tips option can also be unchecked (in this case):

The partially transparent effect from the teapot scene is created with adding Along Stroke modifier in the Alpha panel, but for some reason in Cycles it isn't visible (teapot scene is in Internal). Even setting Thickness to 0 doesn't really change anything, which is quite unexpected. It looks like in Cycles the freestyle won't calculate and hence use alpha of the charcoal texture. If making that in Internal effect shows up immediately:

It's hard to say if this means for you that Freestyle went ahead since that time but anyway the resulting effect of the freestyle strokes can be changed quite drastically by editing options and adding modifiers.

If going with only one round of the stroke (and hence only one stroke drawn on the objects) you will need to alter it as much as possible in order to get varying style. You can use several line styles as already mentioned by @TK or you can go with more modifiers for one line style. I will use modifiers for Thickness panel mostly but possibilities are nearly endless as many of them have also additional modes of stroke overlaying which changes end result quite noticeable.

Using stroke thickness (Freestyle Line Style > Thickness) at 3 and Spacing at 1 the result is thin drawing: 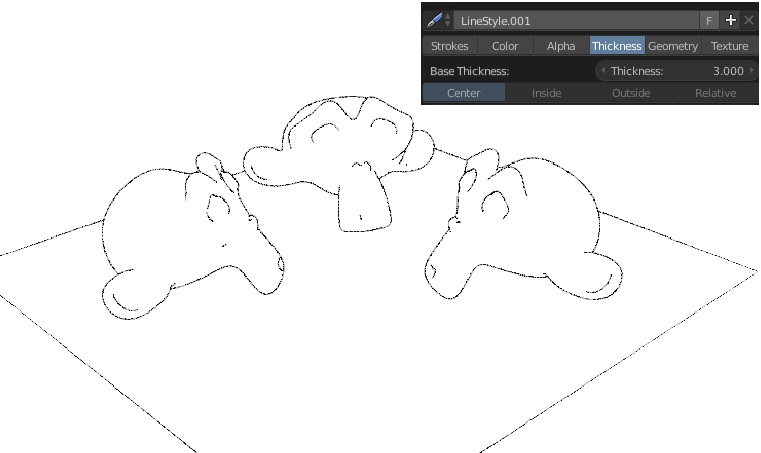 To increase the variation add Along Stroke modifier to the thickness of the stroke. It will apply new values for thickness based on the progression type and blending mode choosed; from the manual:

To mimic caligraphic changing of the line thickness which depends on the stroke angle add Caligraphy modifier. Its Orientation property will simullate orientaition of the virtual pen drawing on the paper - the more it's aligned with the vertical axis the more horizontal strokes will be fat and vertical - thin. Default values of 60 are quite good as well.

Also it's possible to add some noise to the stroke in general; Noise modifier will be the last in the Thickness panel.

To simulate transparency of the strokes modifiers in the Alpha panel are added. In this example Along Stroke modifier is used.

Note also that most of the modifiers can be set to another blending modes thus altering their final result which allows even more different things to try.

How about using 3 line sets instead 1 doing 3 sketchy repeats? For each of the 3 linesets you can specify almost the same line style settings but with minor differences that create desired randomness. Here's the result of my attempt based on the provided .blend file: 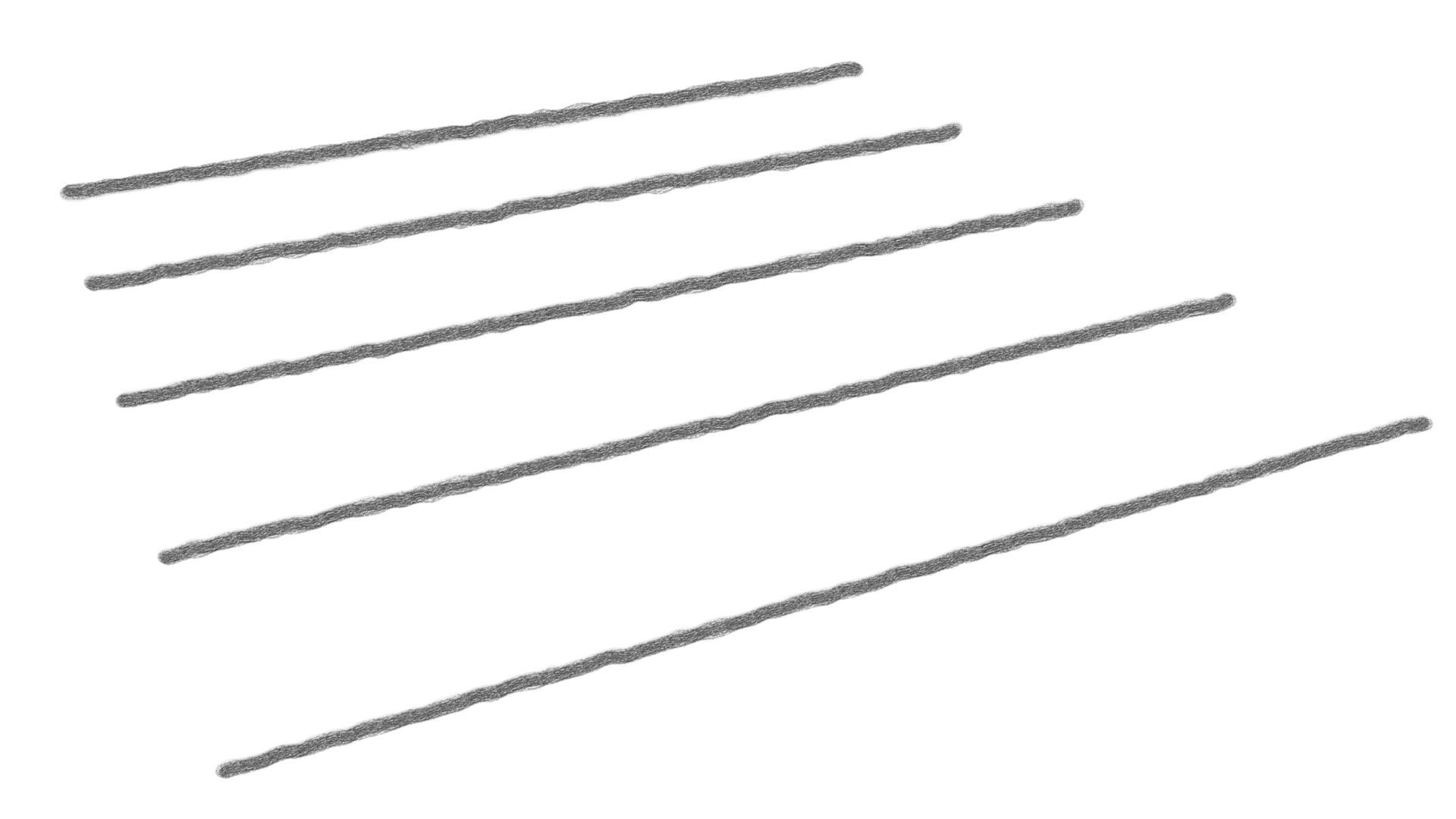 And here's a screen capture of the line style settings: 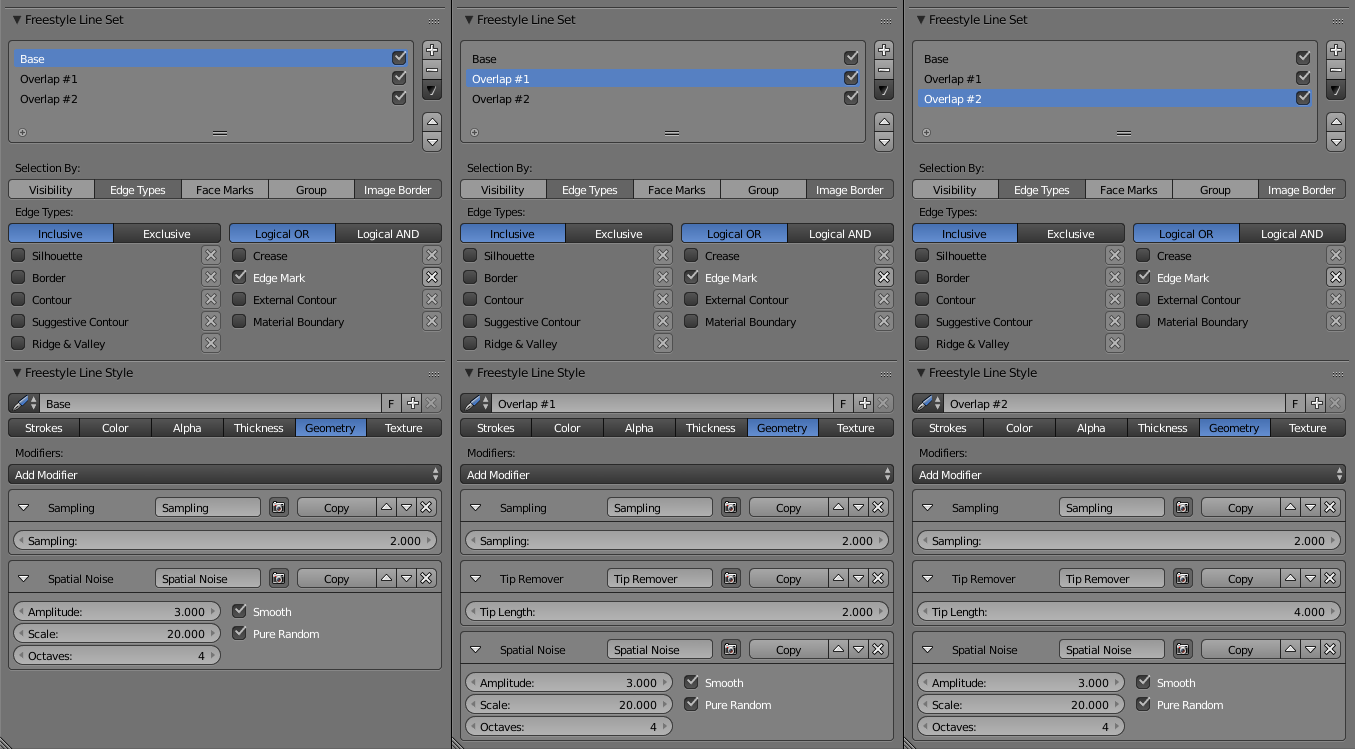 I hope this helps you better deal with uniform texture repeats.

Most of the options are already well covered by Mr Zak and T.K.'s answers, but here's some more methods. The big issue with the textured stroke is that it basically gives you a dotted line of boxes that each hold the texture. But there can be splits or overlaps that cause problems, or gaps where strokes break.

The most simple solution if you only want a single stroke is to use the freestyle lines as a mask to overlay a stack of textures in the compositor. This can be instead of using textures stroke, or in addition to it. For this, you will want a clean line set with thickness and alpha modifiers as Mr Zak describes, and then you will need a high frequency charcoal texture to overlay the whole image based on it. There are lots of potential ways to overlay it. Mixing several different textures together, and then varying them with cloud textures or something similar will probably get best results.

To help get your lines nice and clean, people usually put them through a blur, and then multiply the original lines on top of the blurred lines to feather the edges. They can also be put through filters like laplace and kirsch and then mixed back together to get a bit more variation.

While it probably isn't what you'll be after in this case, it is also viable to add more meshes or mesh pieces to catch lines. So instead of more rounds, or more linesets, you can have more meshes. This could be a simple curve in an area that you know needs to get a line, all the way up to an instanced version of the mesh on a separate layer that has a different amount of subsurf, smooth, or decimate.

A slightly different version of the mesh will mean you get a different chaining pattern. If you use multiple render layers off different versions of the mesh and combine then in the compositor, you can have quite a bit of control. (I doubt that will suit this particular project, but it may help others looking at this question.) 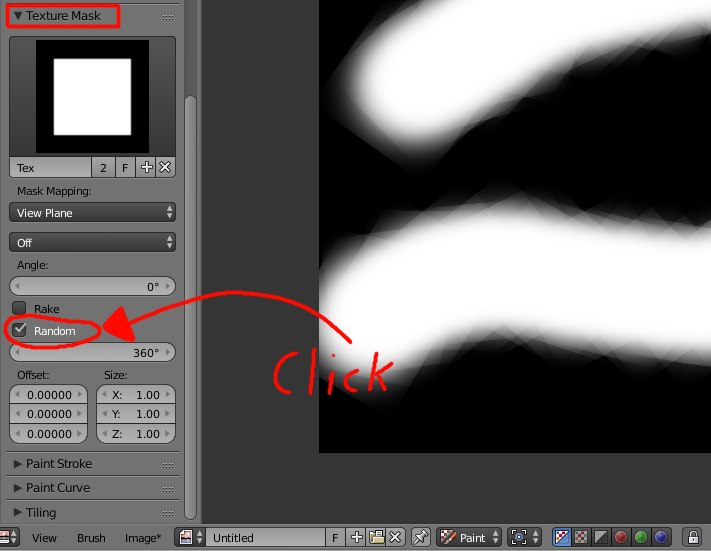 Under "Texture Mask" tab, in UV Paint Mode, there is an option button called "Random", which rotates the brush randomly in strokes. You can set the max random rotation offset by changing the "360" degrees to whatever angel you want for strokes.

Not the answer you're looking for? Browse other questions tagged texturing freestyle npr or ask your own question.

4
How to do custom Freestyle brush shape in Blender 2.74?
4
How can I use pencil style strokes in frestyle?
1
Freestyle: how to make uneven messy outlines

4
How to do custom Freestyle brush shape in Blender 2.74?
0
Dashed lines (made with Freestyle) are rendering inconsistently
2
How do I stop a displacement modifier from breaking the edges of its mesh into many small parts?
3
During render can I render freestyle lines, then re-insert them back into the scene so other objects may interact with them during their rendering?
0
Removing white artifacts from composition
1
Error: Freestyle Lines Ignoring Displacement