Can I use object's Custom Properties inside Cycles materials?

I wonder if maybe the Attribute node in Cycles can bring in a Custom Property of an object.

I have a model that has an LED light, and I wish I could change the color of the LED on different instances of the model, without using different materials. 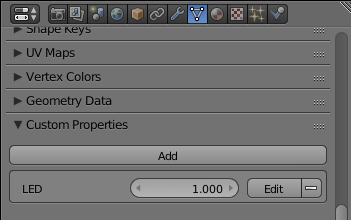 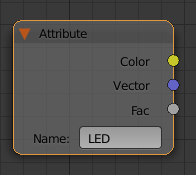 cycles-render-engine materials
Share
Improve this question
asked May 15 '17 at 11:11

An alternative to using the pass ID is using the object name and an OSL script. It is not very elegant either, but at least allows for setting multiple values. I have explained it here.

Use the object's pass ID.

That's a less than elegant, jerry-jigged way of doing it, but I've managed to animate the emission of some cartoon stars independently with this, even they're sharing the same material.

I collect the objects pass ID with the Object Info node, then perform some operations on it so I can operate under an arbitrarily defined range of 100 to 110. You can use any range you want. Notice I have only 10 different brightness levels on my shader. If you need something smoother, get yourself a wider range.

After doing that, it's just a matter of setting the object's pass IDs and the material will react accordingly on a per-object basis. You can even animate them by hitting I on the pass ID field.

This approach has lot's of limitations, though:

But it's the best I've found until now.

There's a patch that adds exactly this functionality in the works:

6
Can I get the object dimensions in Cycles?

15
Can I refer to another object's properties from a Cycles node shader? Drivers? If so, how?
2
Use ID properties in cycles/nodes
10
Use custom properties (variable values) in the node editor
3
Any way of serializing Blender cycles materials data?
11
What can a custom cycles shader do?
0
How Can I Instance an Animated Cycles Gradient Material?
5
Can you use another material as input to material nodes in cycles?