creating mesh on an isosurface

I have a function like $f(x,y,z)=\text{constant}$. It is not straightforward to solve $z$ as a function of $x$, $y$, and $\text{constant}$ analytically. So, I want to choose a Constant value, draw that isosurface, and create a mesh on the surface.

1) is there any way to draw a function like $f(x,y,z)=\text{constant}$ without solving it?

Thanks in advance for your reply and comments.

The following is a workaround rather than a complete solution. It doesn't answer your actual question, in that it doesn't generate a mesh representing the equation, thus you can't use image textures or do more elaborate things, like sculpting or rigging. It renders a visual representation of the equation, by using volumetric shading and some math nodes. Moreover, it's Cycles specific. What it does do, is work well with any implicit equation of three variables, as long as it uses functions that exist in Cycles math nodes.

At this point, it's perfectly ok to move, rotate and scale the box, as long as you do so in object mode and don't apply any transformations. Also keep in mind that scaling is a bit special: unless you scale equally along all three axes, you will end up with different step size along the axes. This may be good or bad, and the decision is yours to make.

Open up the compositor, and make sure the shader editor is active and that Use Nodes is checked (the purple rectangles in the image below). If there is a button named New, click it, to create a new material. 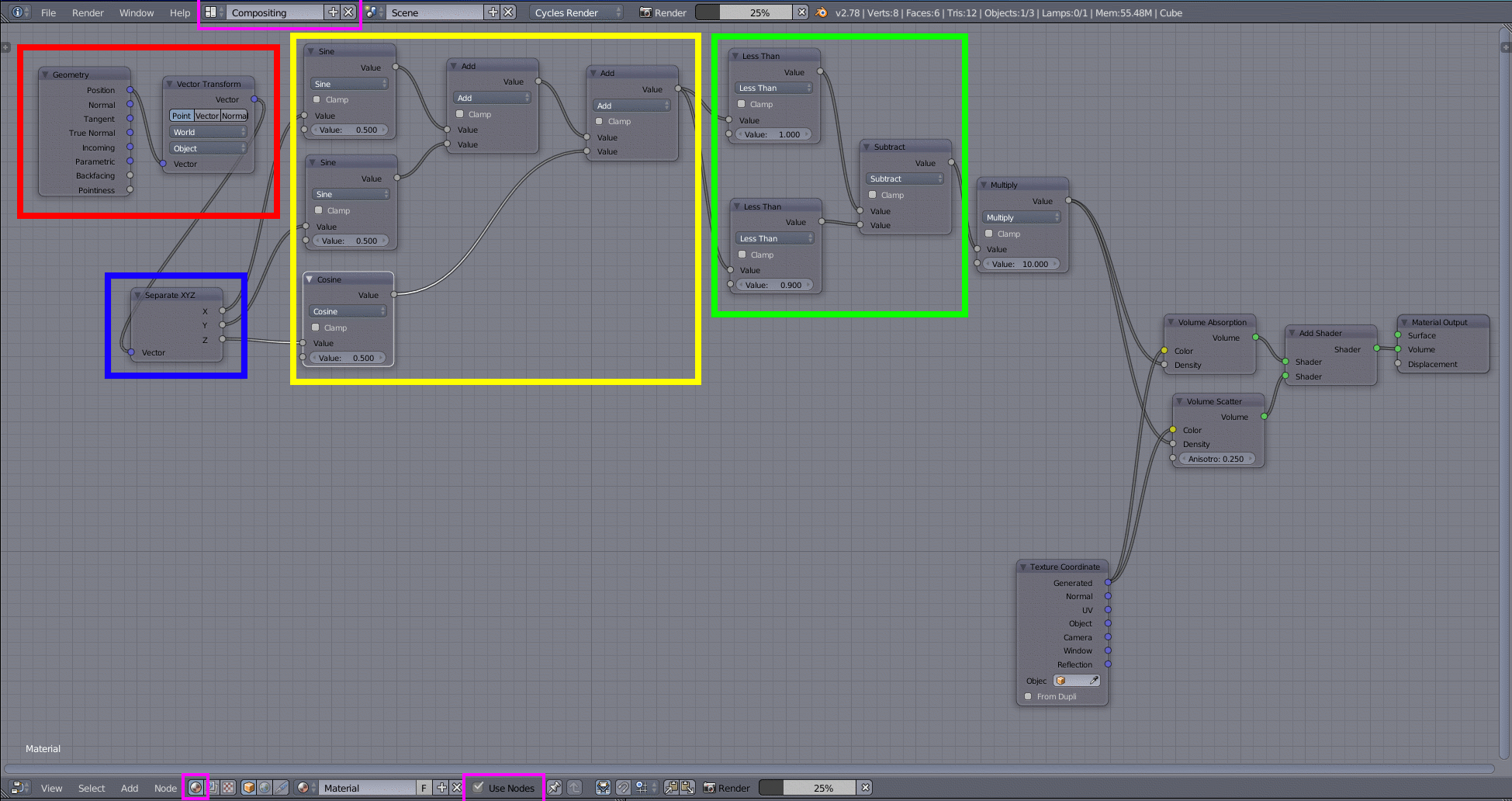 The nodes above corresponds to the equation sin(x)+sin(y)+cos(z)=1, which is the one you ask about in Creating mesh on a surface with two variables.

The Separate XYZ node (the blue rectangle) does what its name suggests.

The nodes in the yellow rectangle are the left side of the equation.

The nodes in the green rectangle are the right side of the equation. This probably requires some explanation. If you simply use the Less Than 1.000 you will get everything inside the volume. To simulate a surface with a slight thickness, I subtract everything below some value that is less than 1 (0.9 in the image). The closer you set this to 1, the more it will look like it's infinitely thin, but the higher you will have to set the density to make it appear opaque.

The multiply node controls the density. The higher you set this, the more it will look like an opaque surface.

The Volume Absorption and the Volume Scatter are the shaders at work here, and the Add Shader combines those. You need not use absorption and scatter exactly like this, and you may use Mix Node instead of add, if you prefer. Just to remember to use volumetric nodes, and connect to the Volume socket of the Material Output node. The usable shaders for volumetric shading are Volume Absorption, Volume Scatter and Emission.

The Texture Coordinate connected to the Color sockets of the shaders, just maps the shading coordinates to a colour. Red along the X axis, green along the Y axis and blue along the Z axis. 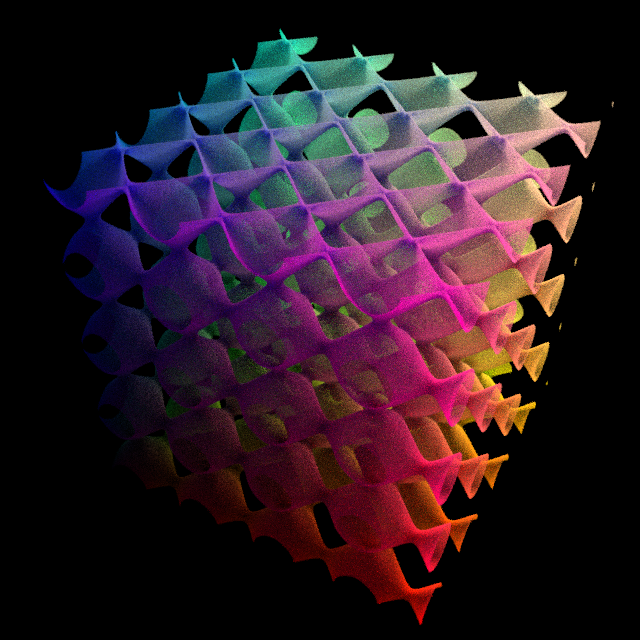 And here's an example .blend (it's not exactly identical to the example, but the concept is the same):

Not the answer you're looking for? Browse other questions tagged mesh mathematics or ask your own question.

8
I need to simulate the interference of two sinewaves
8
Graph in blender a function of two variables,
0
Creating mesh on a surface with two variables

5
Animating z surface math functions
0
Creating mesh on a surface with two variables
3
How to create a 3D object from a specific equation
0
Creating a mesh on any object, duplicating the mesh and editing faces
1
Vector scaling in python
2
Smooth Step Function with Math Nodes