Game Character walk through wall, even with Dynamic physics

Recently, I was developing a 3D Maze Game using Blender Game Engine. I set my character and maze walls physics to Dynamic with Convex Hull collision bound. when I test my game, my character walked through and sometime pushed the wall!. Using Static physics will give an unsolid wall. My character are controlled using Simple Motion by keyboard.

Actually, the maze itself was created inside a box and the box itself has been solidified (using Solidify Modifier). The maze wall are a big single object so there is no reason to use collision bounds option other than using Convex Hull or Triangle Mesh.No Ghost option checked in this project at all.

I had followed all advice and tutorial from Youtube and other Blender Forums, but what I got is still not a solid wall, and even made the maze wall being pushed by my character. Is there any workaround to make the maze wall fully solid so the character couldn't get through wall? 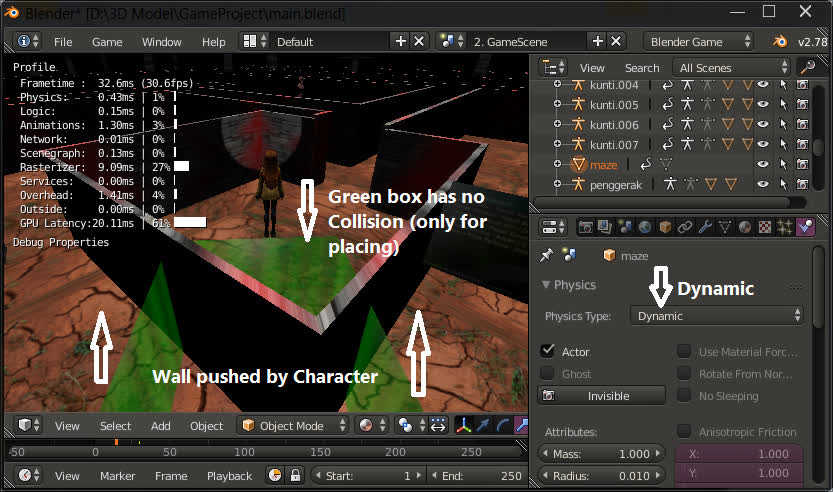 I'm indonesian after all, sorry if there's bad english.

You Character needs to be dynamic, and the walls/scenery static. Don't use the "simple motion" part of the motion actuator either. Put it into servo mode (drop down box) or set the linear velocity of the player. (The object needs to be dynamic for these options to appear).

Try playing around with the physics and motion in a completely seperate blend. Try making a prototype with just cubes - this way you'll learn what the various physics options do far better than if someone tells you.

Not the answer you're looking for? Browse other questions tagged game-engine physics collision or ask your own question.