Two Gradient textures with Constant ColorRamps added by Math node, one is rotated by 180 degrees. I can control line width by changing position of second color input in ColorRamps (they must be the same value in both).

This is wrapped in a Node Group called "Line". 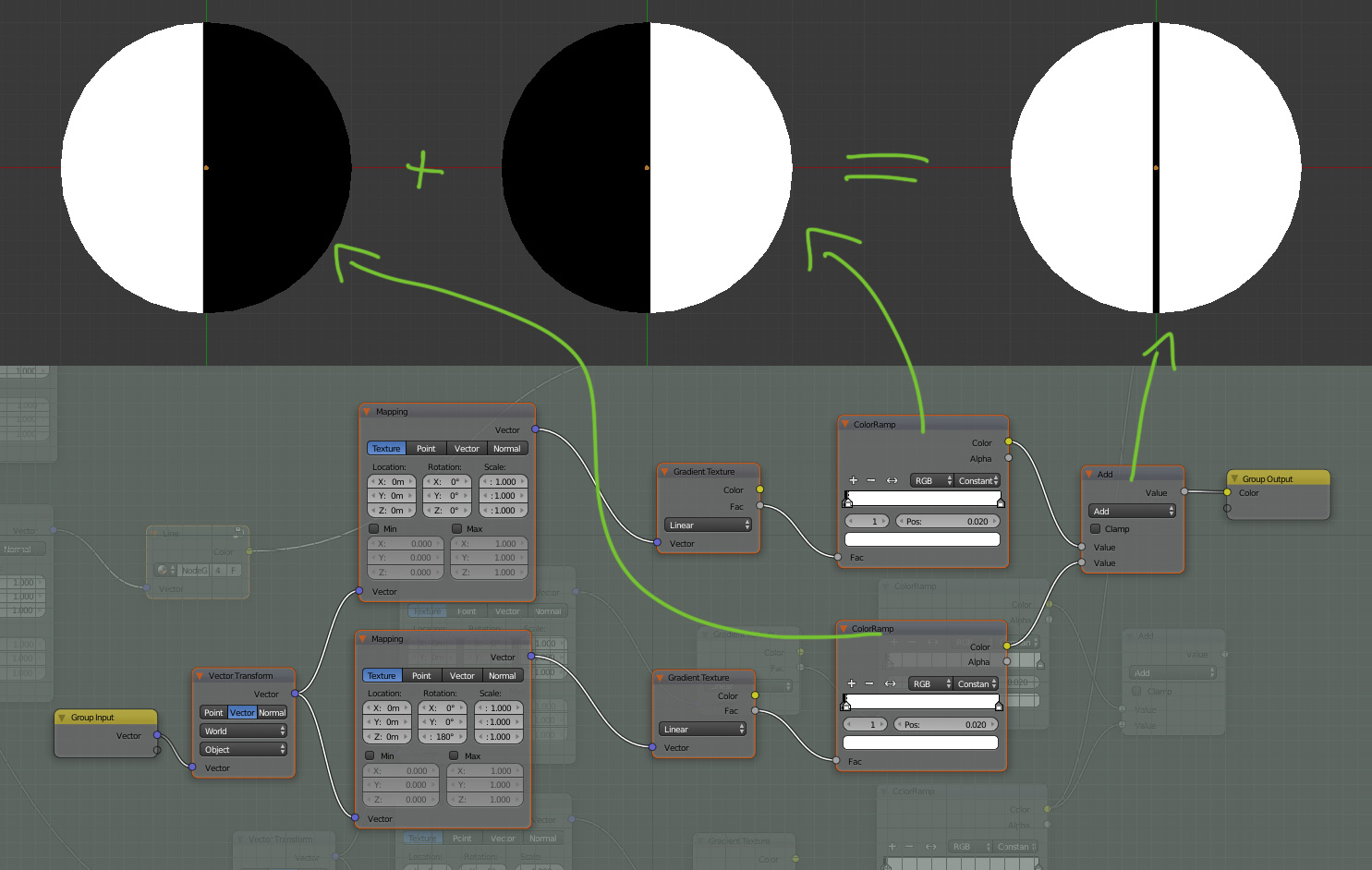 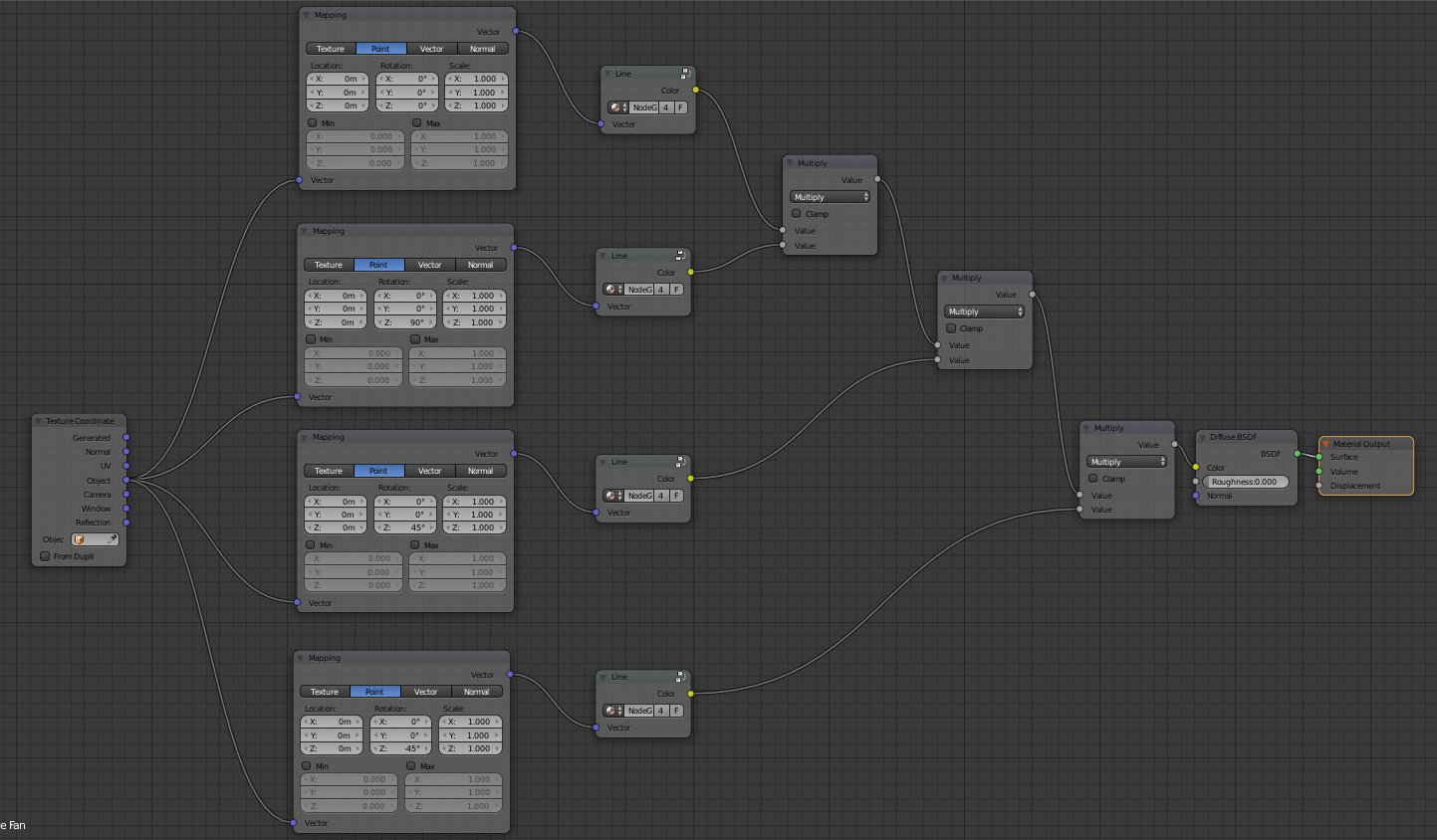 It seems to be complete solution but first of all it's kind a over complicated for my taste. It's working only with Texture Coordinates > Object and controlling width and line smoothness isn't to easy.

As much as I want to ask only one question they are too dependable of each other and answering one will eliminate the need for others.

- Partially solved thanks to @kilbee.

2. How to control line smoothness? 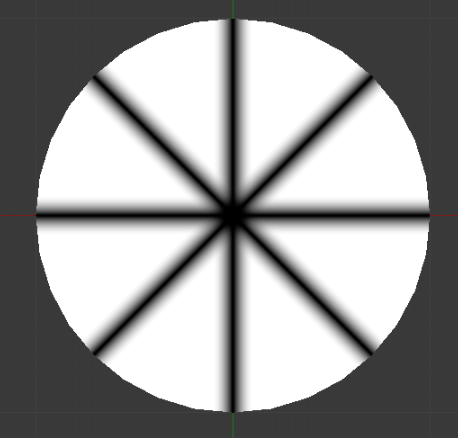 Thanks to @kilbee I have managed to pack node setup and control width but I have lost ability to smooth lines. I was wrong saying that one question will solve the other one:)

I have also edited question a little bit to be more specific.

@kilbee has done it. Amazing. Here is his version packed in Node Groups with little modifications (just Multiply nodes as Values):

I don't know if you'd find it easier, but I often use split vector values for this and (greater/less than) math node:

As you can see, this way you can easily control position on the object. Creating a line from this is simply a matter of offsetting the value in both directions and adding the results:

You can easily make it more compact, but I'll leave it as simple as possible to experiment with.

EDIT: Well ok then, I'd use gradient texture indeed and then just apply different formulas for color interpolation or/and scale the texture coordinates. If you think about Gradient texture (Linear), it's actually a simple interpolation between black and white (0 to 1). Using right mathematical formula should give you any interpolation you want. So I'd approach this first by scaling the mapping vector from Object output (multiplying by value higher than 1 would squash the values inside, while using values between 0 and 1 would extend the interpolation beyond the object). So, if you think about that, you could say that with default values you have a soft line of the width of your object:

The 'greater than' node explains it enough, I hope:

So to control the interpolation - the first thing that comes to my mind would be use power math node:

Then simply scale the mapping vector:

If you'd like to shift the lines, you just add a value to each axis, just like I did multiplying there. If you experiment with different math formulas and Gradient texture interpolations (Quadratic, Ease) i think you will find the best way to control the line smoothness this way:

EDIT2: To debug transition you can literally draw it like a function: use Displacement Input for your Material Output (in this example I used simple box scaled in Z to 0.01, with adaptive subdivision). This is how values for Quadratic interpolation look like originally:

A solution which can be animated:

That allows to introduce some variations.

The main node is the following: 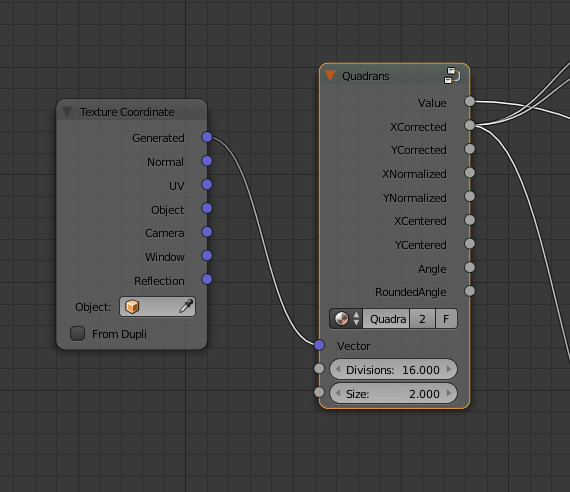 As an alternative to @kilbee's excellent answer, you could manipulate the Object coordinates directly (rather than using Gradient Textures) :

Here the Absolute mirrors around the centre, the Multiply value can be used to adjust the scaling (line width) and the Power node adjusted to affect the 'hardness' of the line (eg, 50 would be a very hard edge, lower values would be softer). Note that the Power node has 'Clamp' set to ensure the resulting value is clipped to between 0.0 and 1.0.

Combined, value nodes can be used to drive each of the variables (scale and hardness) and the result multiplied together. 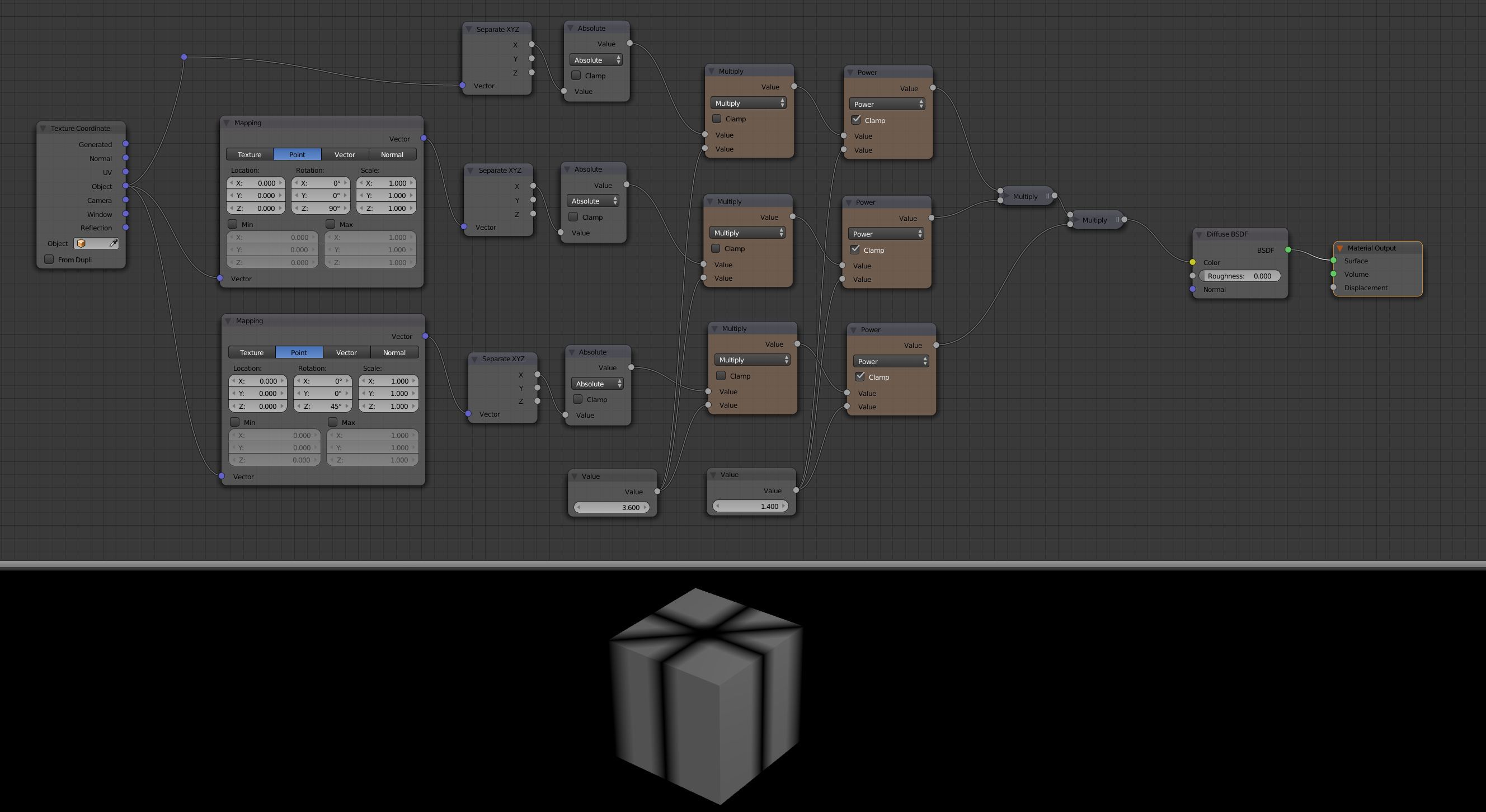 For ease of manipulation of the transition you could replace the Power node with a Color Ramp :

Again, use the Multiply node to scale the overall effect. Adjust the Color Ramp to affect the transition, adding/moving color points or changing the Interpolation (Constant, Linear, Ease, B-Spline, etc.) as desired.

A further method is to use an RGB Curves node by adjusting the 'Combined' channel (the 'C' rather than 'R', 'G' or 'B'). This provides full visual control of the profile of the transition. 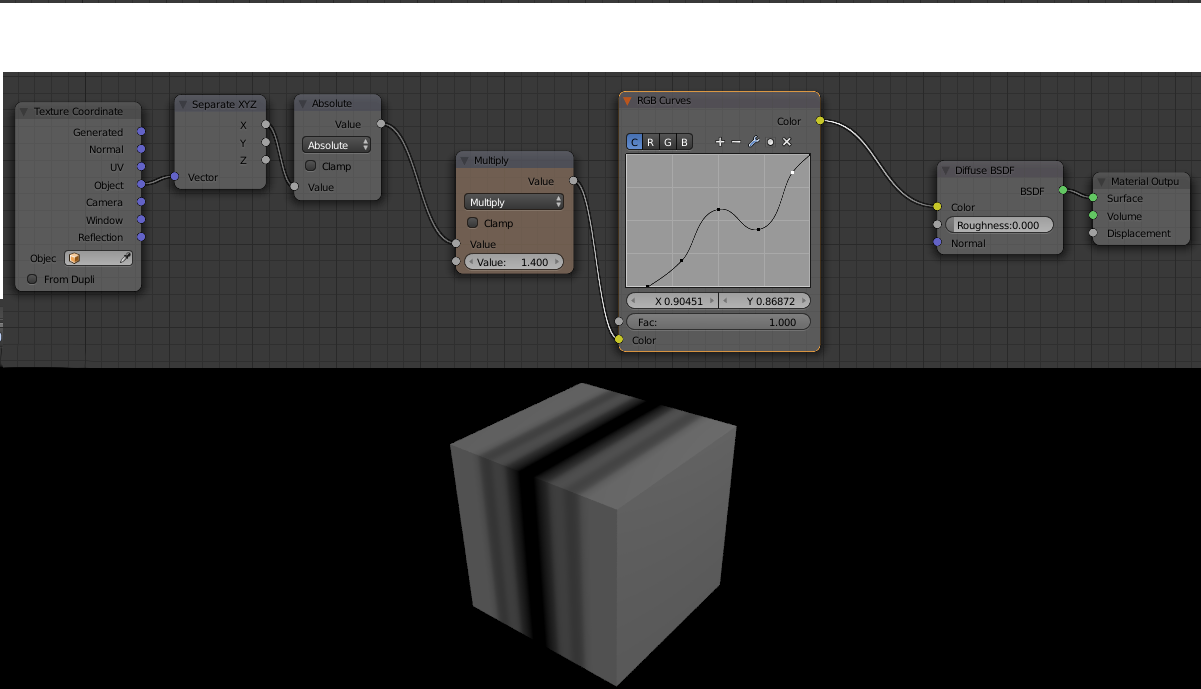 Not the answer you're looking for? Browse other questions tagged cycles-render-engine texturing procedural or ask your own question.

9
How to create a Life Preserver style texture?

8
Creating a procedural stone texture
3
Purely Node Based Materials
1
Is there a way to separate colors from chained mix rgb nodes?
2
Is there any way to move/deform procedural work along a mesh as a normal texture would?
23
Randomly populating procedural shape (or Image Texture) in Cycles
3
Procedural frosting texture
8
Procedural random/different colors based on normal direction
0
How do I create this material in cycles (2.79)?