How to effectively animate a "lasso"?

I am currently making an internship in the field of chemical research, and as part of this internship I want to use Blender to make presentations. I recently started using Blender, I understood some basics but not everything .. For example, I would like to animate a "lasso" but I think to do it very badly because I spend a lot of time to have a very imperfect rendering and I am sure there is way to make much faster and much more effective.

Here is what it gives in frame 1:

Well, here we are very far from a pro render (the axis in gray should be fixed on the torus, the curve is ugly ...) but the overall idea of what I would like to do is present.

For now I tinker (it's really the impression that it gives me) with a bezier curve and hooks. Can you tell me how to get to my goal?

I thank you for your response in advance, Rota. 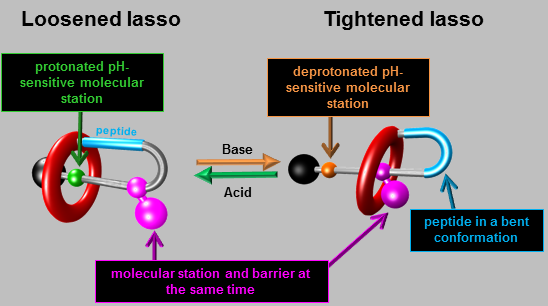 I propose to use curves, parenting and hooks to do that.

We can use a curve modifier to constraint both tubes to follow a curve.

But we also want that it unbend along its own size.

So the circular part of the curve have to be pushed on right. We do that using a hook to the ring of the corresponding control points. The hook influence is set to 0.2 in order to avoid these points to be pushed right at the same speed as the other objects (an influence of 1 would have been the same speed).

From that, the blue tube is simply parented to the ring.

But the gray tube needs to move along from the ring but except its last part which needs to stay stuck on the black sphere.

So instead of parenting it, we use a hook again on all vertices except the last ones (the one near the black sphere which is simply placed near it). These vertices are set in a vertex group used in the hook modifier:

Though, this setup is very specific to this left/right movement.

Not the answer you're looking for? Browse other questions tagged modeling animation or ask your own question.

1
How to control a bezier curve using an armature?

54
How to model effectively using exact measurements?
26
How to reverse animate?
5
How to animate a beating heart?
1
i have a problem with my lasso tool
2
How to model a simple semi-organic form like this effectively?
2
How can I animate radial symmetric object?
0
How can I effectively create a full face mask?