Quad faces along the curve or grease pencil

Is it possible to generate quad faces along the curve ?

Is it possible to generate quad faces along the grease pencil ?

For example, I set up some bezier curve and on this curve Blender generate connected quad faces uniformely.

I know that grease pencil can do that for mesh reopology. Is is possible to do that without the mesh?

Black is curve or grease pencil, blue are faces only I want them to be regular (same size) and connected.

Yes. Since at least Blender version 2.65, the grease pencil has included a "convert" button, one of the options of which was to convert the grease pencil work to a bezier curve. Selecting the bezier curve, and applying the command ALT-C permits the conversion of the bezier curve to a mesh object. From there it's just a matter of applying standard modeling techniques to convert the edges to quad faces. The following image exemplifying this technique was made by adding a bezier curve to a scene in top orthographic view, selecting all vertices, witching to front orthographic view, and extruding along the z axis. 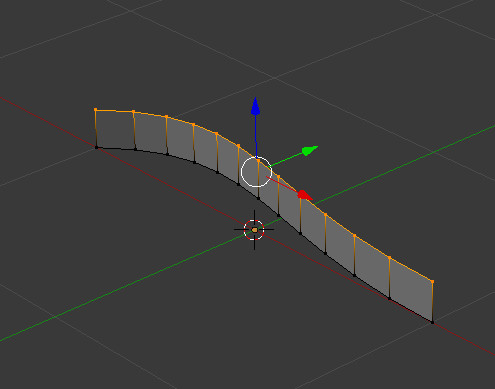 Not the answer you're looking for? Browse other questions tagged bezier-curves grease-pencil or ask your own question.