What is a BSDF?

The term "BSDF" is common in Cycles shaders such as "Diffuse BSDF" and "Glass BSDF" but is not present in all names ("Emission" and "Mix Shader" are two such examples).

What exactly is a BSDF?

Essentially, it's a mathematical function that determines the probability that a specific ray of light will be reflected (scattered) at a given angle.

Cycles is a probabilistic ray-tracing engine. It incorporates randomness by tracing the paths of rays of light at slightly different angles. The number of rays per pixel is determined by the sample count; more samples means a more accurate image. Each time a ray bounces, the BSDF determines in which direction the ray will bounce.

Some shaders, like "Emission," don't have the suffix BSDF because they don't reflect light. Emission shaders, as the name implies, emit light, while Mix Shaders simply take the weighted average of the BSDF of two different shaders, with the weight determined by the Factor input.

You may also notice that the Subsurface Scattering shader output is called a "BSSRDF." Similarly, this is a bidirectional surface scattering reflectance distribution function, because SSS materials don't simply reflect light; they absorb it and then reflect it later: 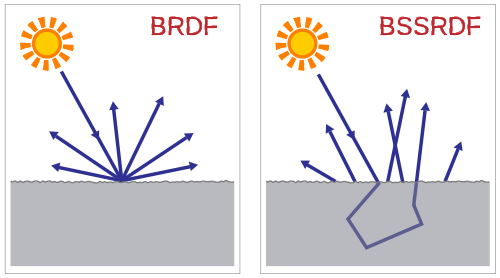 (images from Wikipedia, created by User:Jurohi)

In short, the suffix BSDF means that the shader will scatter light. The type of shader determines the distribution function, which in turn determines how the light is scattered and how the material appears.

Not the answer you're looking for? Browse other questions tagged cycles-render-engine nodes shaders terminology or ask your own question.

13
How the Fresnel effect works and how to construct Physically-Based shaders in Blender?
16
Texture vs. Material vs. Shader
9
How does Blender lights work in Cycles regarding intensity?
1
How to add glossiness on a cartoon shading?
4
What is the difference between “Shader” and “Material”?
1
How to setting nodes for making a shop sign (lighting)