I'm working on a procedural wood texture, and it's become clear that I don't understand cycles vectors at all :( I'm hoping someone will see an obvious problem or at least point me to a good resource for learning about vectors in details.

I used this post's answer to create a wood texture node, and I'm using it to generate my rings. The issue is that the texture doesn't move with the object. Moving an object with this material applied is like cutting the object out of a different section of the same log. 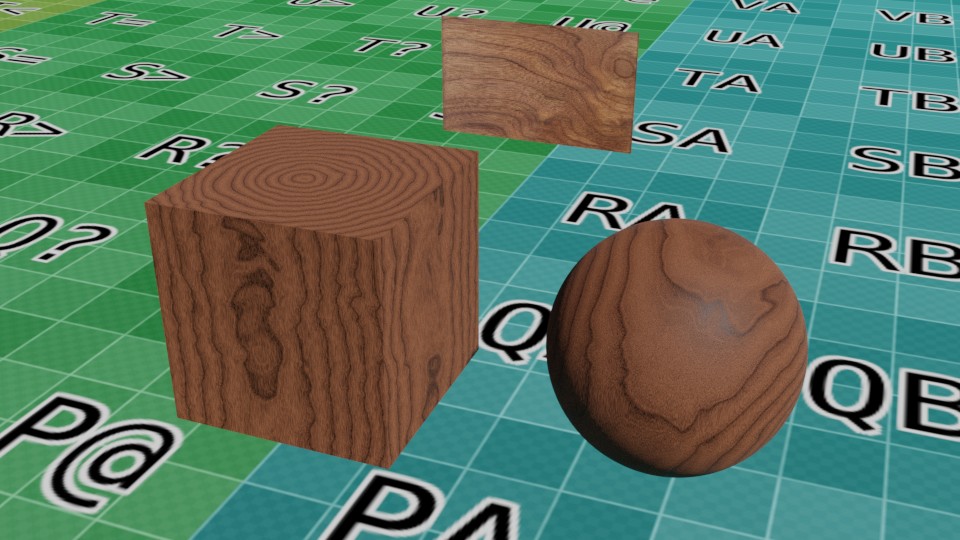 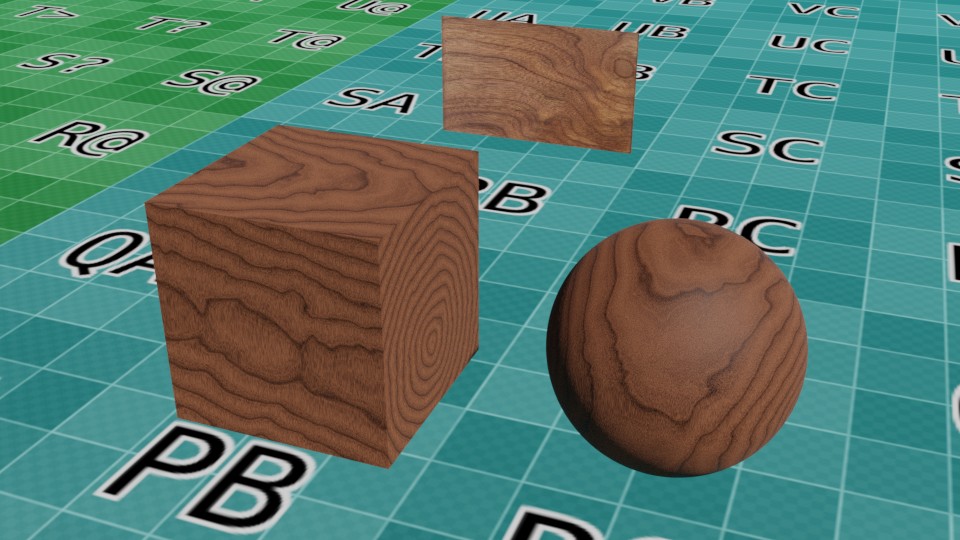 I expect this issue is caused by one of the three vectors (or a combination of them) that are involved in the wood texture node. Below is a picture of the noodle. Any of the Less/More or PBR nodes can be ignored for this post. They are convinence node groups I made by following the Blender Guru PBR tutorial.

In the main noodle, we care about the blue node and the two vectors feeding into it: 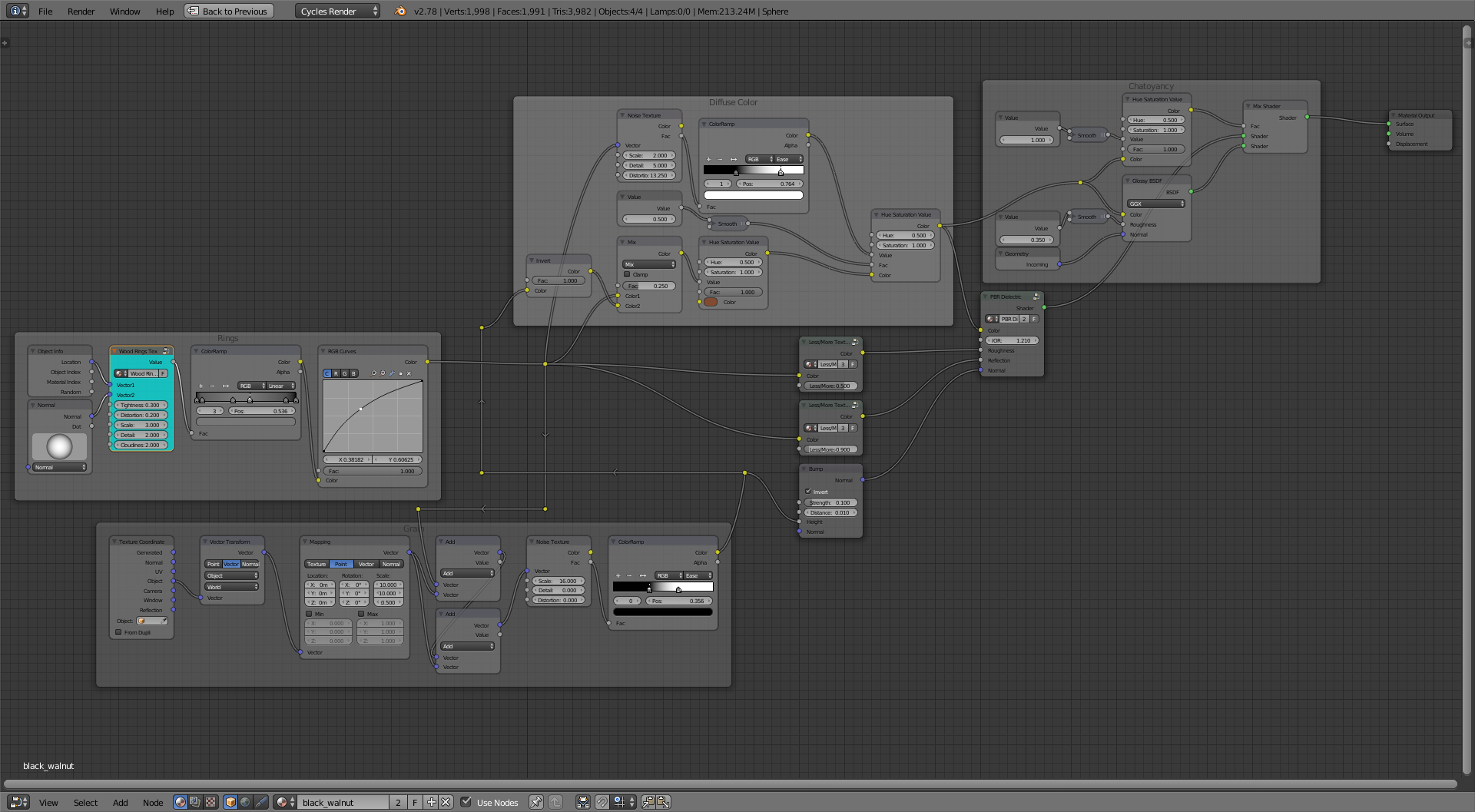 Entering that node, we can see how it works. The distance node is used to calculate the distance between the center of the texture (core of the log the wood was cut from) and the surface of the object. 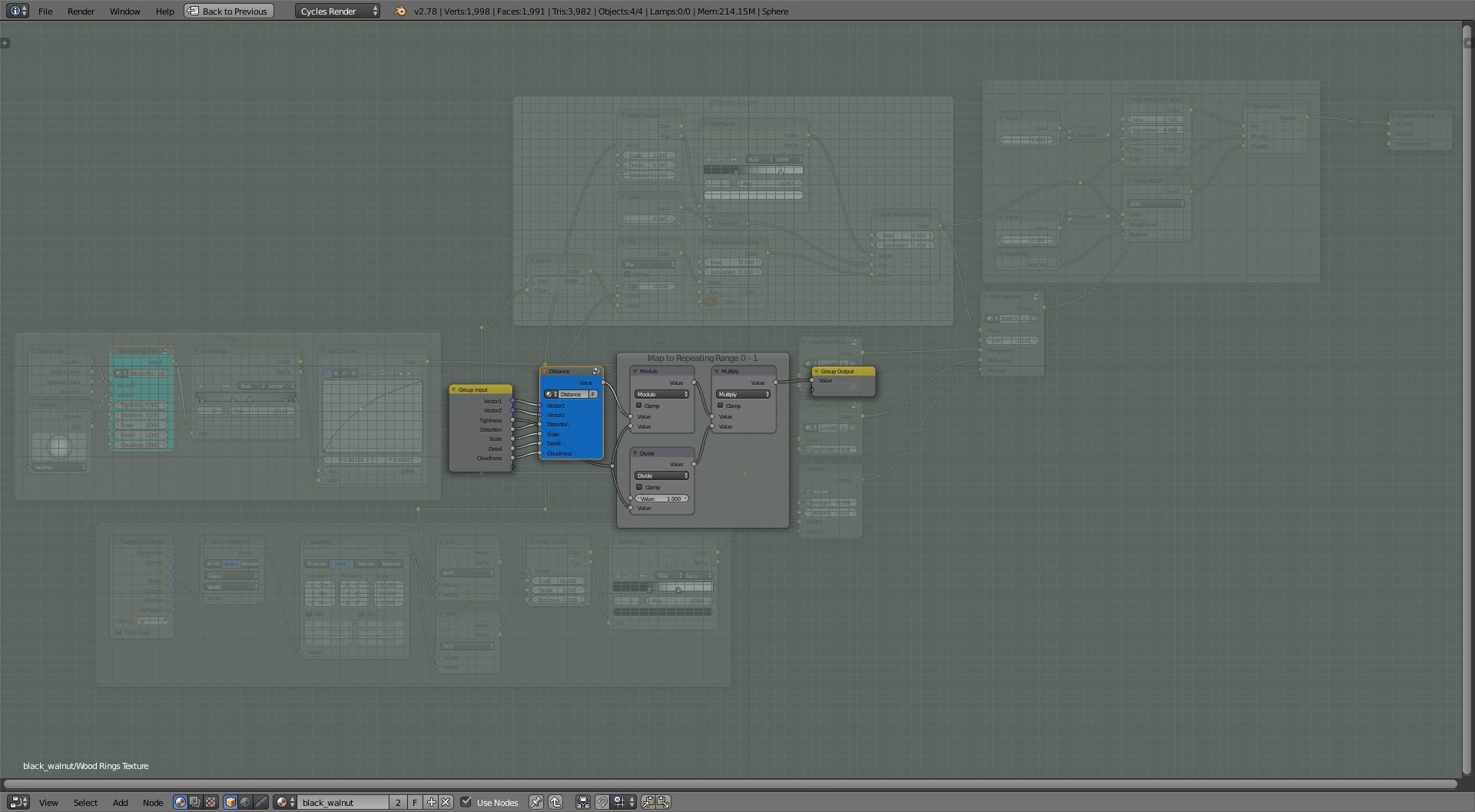 The third vector I mentioned is hidden inside the distance node, and I think it is intended to represent the objects 3D center or something like that. 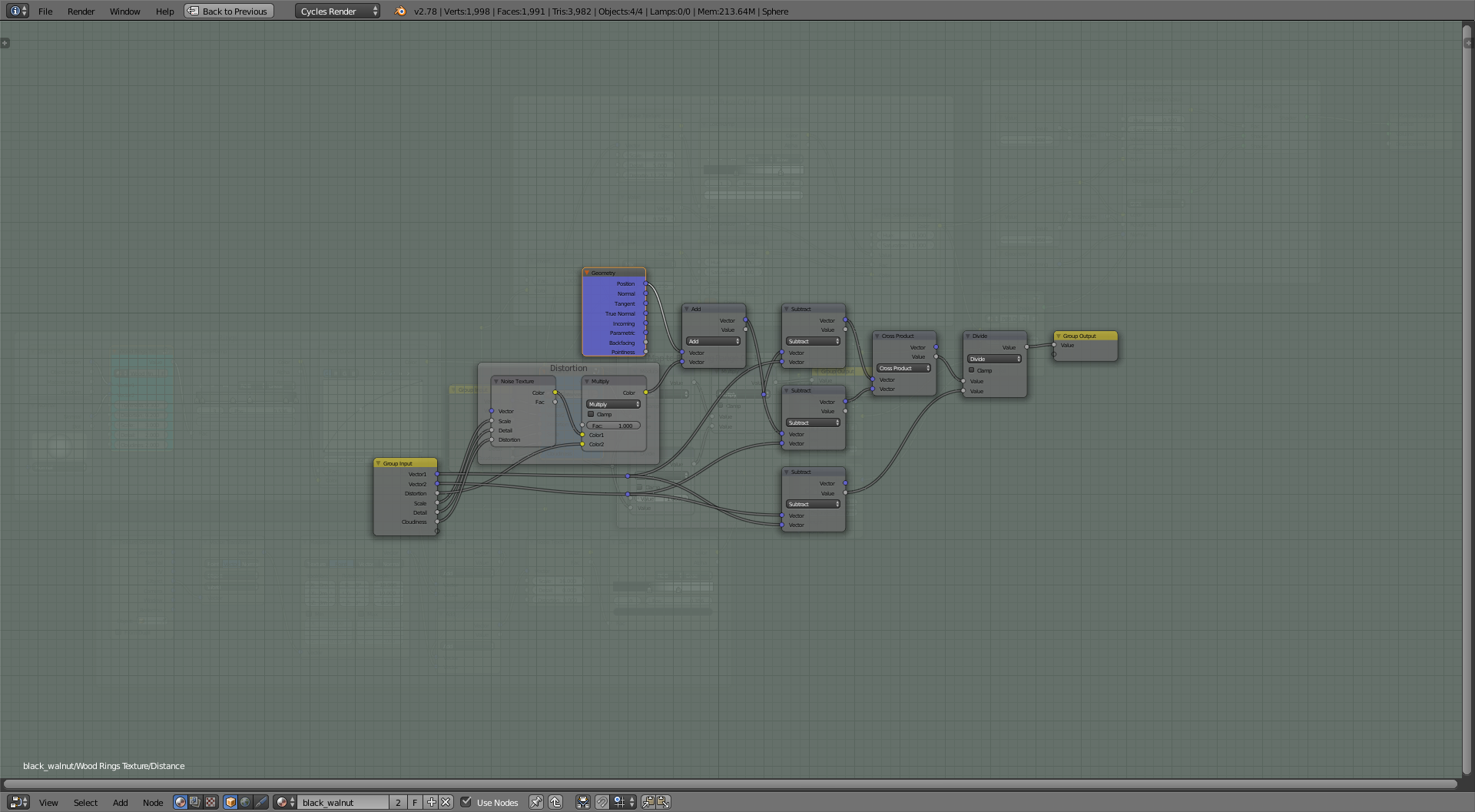 Here is a link to the full blend file.

The problem you are having is that the two inputs to the Wood Rings Texture are two world-space points that the "core" of the wood passes through.

You are currently supplying a world-space point (the object location, aka center), and a normal vector. However, the normal vector is being used as a point, not a vector. As a result, you are defining a line which passes through the object-center and a point within 1 unit of the global origin.

One part of the solution is to convert the calculations into object space, making these two core endpoints object space coordinates. This can be done by going into the distance node and replacing Geometry->Position with TextureCoordinate->Object. This supplies the object-space position of the texel to the distance calculation. 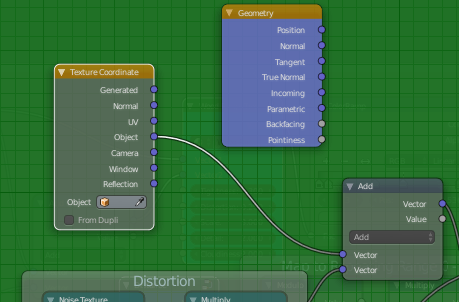 Here is a fixed blend file.

This solution is a bit limited, in that it has only one core orientation per shader, and we'd prefer to have one per object instance.

One alternative is to use script nodes to read the object positions of empties, which can be created per object instance.

Another alternative is to randomly generate core orientations per object.

Ok, thanks for all the help! I've managed to fix the problem. I still don't fully understand these vectors, so please comment on anything I say that shows a misunderstanding of how they work.

The below image shows the new noodle. I left it in groups so it'd be easier to see what's going on, but all three of the new groups should be combined into a custom node just like the original blue node they've replaced. 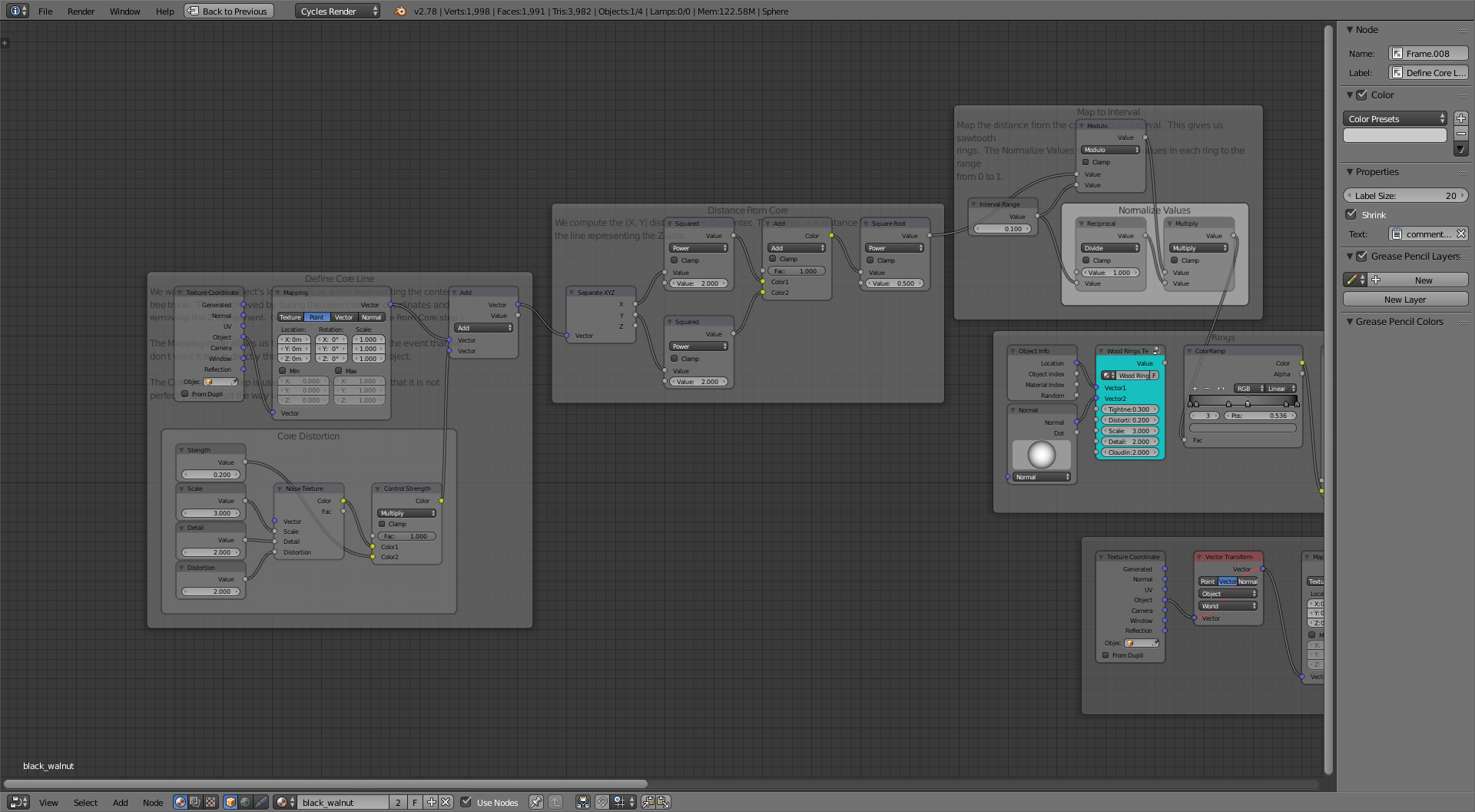 I think what I've basically done is to define the object's local Z-axis as the core line. That means the rings are centered around the object's 3D-center along the Z-axis. The mapping node allows you to move that center line around manually.

The reason I didn't just make this change inside the existing node is because the distance can be calculated much more simply, as shown in the Distance From Core group. The new setup puts out the exact same texture as the broken one for objects at the origin and for tightness values of 1/3 of the original.

Here's a link to the fixed blend file.

Not the answer you're looking for? Browse other questions tagged cycles-render-engine materials nodes vector-mapping procedural or ask your own question.

15
Can I refer to another object's properties from a Cycles node shader? Drivers? If so, how?
11
How to align multiple wave textures?
9
Can I access a mesh's local vertex positions in Cycles Nodes?
1
How can I get a random number that is constant per object in a material

1
Texture as Backfacing material in Blender Internal using Nodes
3
Cycles, Materials Baked to Texture Lost Shading
1
procedural texture randomises its position every frame of animation
0
How do implement material without a texture image?
1
How can I map a texture node, using a factor similar to pointiness, when the mesh edges are too rounded?
2
How do I flip a texture?
0
How to rotate a procedural texture on a single object?