I want to create a short animation with Blender 2.78c, which should be included in PowerPoint 2010 on a windows maschine. At the end, avi videos are not an option, because either the file size is incredible huge or the quality is not satisfying. In principle I can import an mpeg-1 compressed video into PowerPoint, which would be my prefered solution.

I created an animation and saved all frames as png images, which I would like to render as a combined mped file. For integrating the animation seamless into PowerPoint, I chose a white (hex-code #ffffff) background, which works very fine for a single png file. However, when importing the mpeg file, the preview image (the still file displayed before pressing play) also has a white background but when pressing play all subsequent frames have a slightly grayish background (hex-code #ebebeb).

I read that my problem could be related to a RGB to YCbCr conversion, but could anybody please tell me, how to correct this small shift? Or is it just not possible to have a background which is equivalent to #ffffff in an mpeg file? The same problem also occurs for H.264 and mpeg-2 or mpeg-4 compression.

Thanks a lot for your help!

Here is a minimalistic working example: 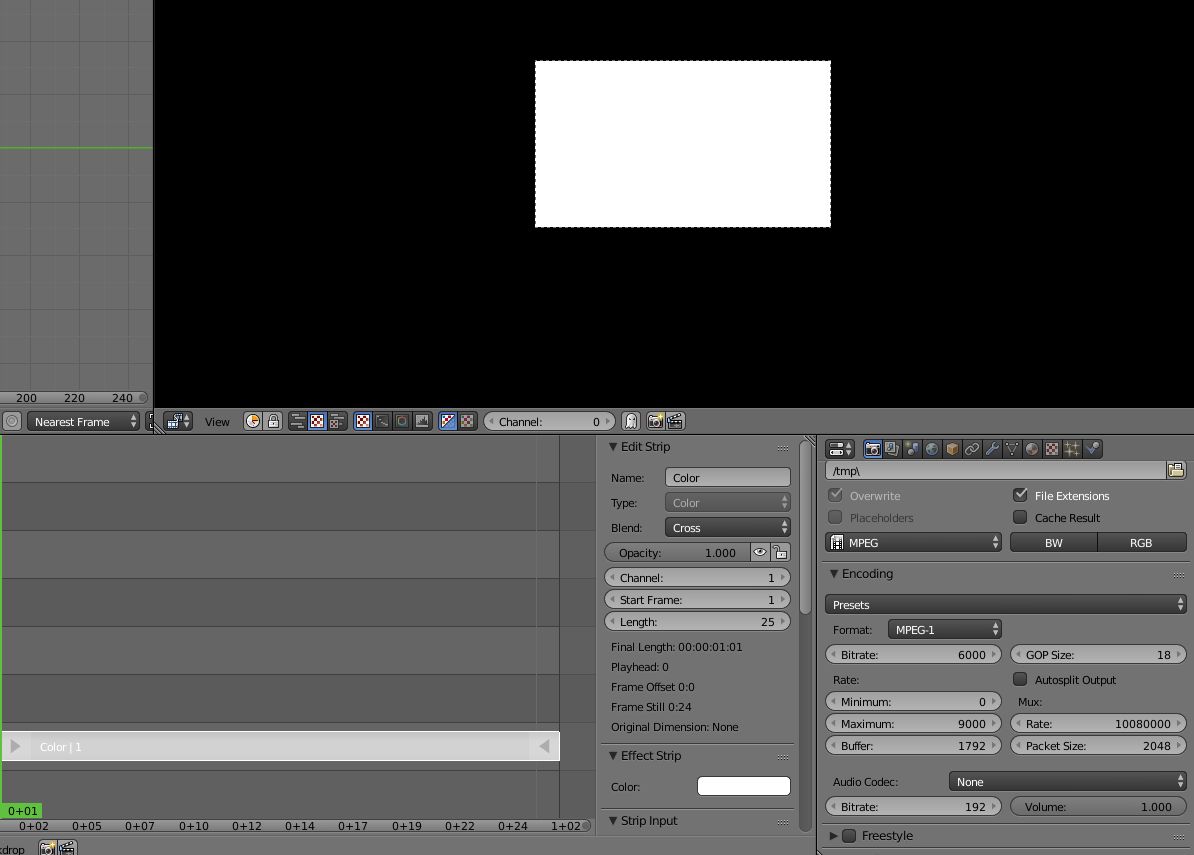 In an empty Blender file (version 2.78c), I switched to Video editor screen and added to track #1 a color (white, #ffffff in rgb). For the output I chose MPEG. Rendering a single frame as a png is fine, however rendering the mpeg-animation changes the white color to a grayish color (#ebebeb in rgb).

I checked now also the color "black" and as Troy_s suggested, also black is shifted by the value 16 (#101010) when viewed in PowerPoint and VLC (no difference between fullscreen and window mode).

However: When viewing the mpeg-1 encoded videos with Windows Media Player there is no distortion. Is it then right to say, that the encoding part worked, but the decoding failed?

[...] I chose a white (hex-code #ffffff) background, which works very fine for a single png file. However, when importing the mpeg file [...] all subsequent frames have a slightly grayish background (hex-code #ebebeb).

Suspiciously 0xEB ends up being 235, which just happens to be the broadcast YCbCr BT.709 level. That might be a hint that your decoding is failing you. The decode should correctly scale that value back up to 255.

If you read any of the other diatribes I have written on the subject of codecs, encoding, and decoding, you will know that they are absolutely and horrifically bound to complexity. Is the encode correct? Are the proper flags set? Is the decode correct? Were the proper flags honoured? Is the GPU to fault? Is there something else somewhere that is bungled.

The long story short is that while we can't precisely answer your question, we can determine a few possible things:

Best advice is to check the encoded output with several players, at both full screen and windowed. Compare results. VLC, MPlayer, and your resident OS media player are good starting points.

I think, I found now the solution to my problem:

I am using a Geforce GTX 1070 graphic card. When clicking on Desktop -> select NVIDIA Settings

In the left tab I selected Video Color Settings and for point #2 (sorry I have to translate it) "how can I change colorsettings" I selected "With NVIDIA settings".

In the tab "Additional preferences" (third one) you can change the reduced color space to the full color space, which was solving my problem for VLC and PowerPoint.

When dealing with the Intel Onboard Graphic this link https://answers.microsoft.com/en-us/msoffice/forum/msoffice_powerpoint-mso_win10/powerpoint-2016-video-color-problem-windows-10/84eb0119-9551-4858-a80d-f095592902e7 could also be useful, which brought me to the right solution

Not the answer you're looking for? Browse other questions tagged video color or ask your own question.

2
Compression & Color change
15
Audio/Video out of sync in rendered video, but not in VSE
6
cycles transparency results in color loss when background is black?
3
Color palette as a replacement for the default color picker
0
How to change text color from red to white?
1
Cycling through colours over time