How to make VSE render faster?

I'm putting together a video from the VSE. In the sequencer window it is rendering and scrubbing at near realtime yet during output it is taking around 3x longer.

The frames are taking 0.13 seconds each whilst the CPU is only utilised around 20%. I am rendering onto an SSD and using H.264 format 1280x720. Tile size options etc appear to have no or very little effect.

In short - is there any method to speed up the rendering of frames from the VSE?

Multithreaded VSE rendering is now natively implemented in blender (since around 2.8 or 2.9), which makes this project kind of obsolete, but for more fine grained control of resources (background rendering, utilizing multiple machines) it can still be useful.

tl;dr: Open source program for automated solution is at the bottom of the post. Latest release as well as usage instruction can be found at the GitHub project page:

I was looking for a free (and maybe even open-source) video editor, and after using it for a while I found out that Blender is very capable of this task, but I was facing the same problem with the unused resources during exporting the finished file. I was searching everywhere, but I couldn't find anything about speeding up the Video Sequence Editor (VSE) rendering that would work for me.

After thinking for a while and trying out things I realized that I can run multiple renders at once from the command line, and it seems like the performance scales pretty much linearly with the number of instances running. Of course until you reach the limit of your processor or the amount of RAM you have. (I was running at 87% CPU and 89% of the memory filled, and I wouldn't recommend going higher, because if one of the rendering processes fail to allocate more memory it will crash and you have to do that part over again.)

After you have the parts/chunks of rendered video, you can put it together using the concatenation functionality of ffmpeg. I tried it with mp4 [H.264] and avi [Xvid], so I can confirm that those are working, but there might be other formats that can be used, but I haven't experimented with those yet.

I don't have time to do a full tutorial now, but if anybody will show interest I might get around to putting together something.

For this to work you need to have the blender and ffmpeg executables in your PATH environmental variable, and the project file needs to be in the current working directory of the command window. The code parts I finally ended up writing and using were these:

to render one chunk of video. (You can try changing BLENDER_RENDER to CYCLES if that works better for you, and you have to replace the 0 and 1000 with the actual frame range you want to render. I had quite good results with doing it in chunks of 1000 frames and having around 4-6 processes running at once.)

You have to set the output properties in the Blender rendering setting while the project is open, but you can close the window afterwards. I think you can also set memory limit for the individual processes in Blender at File -> User Preferences -> System -> Memory Cache Limit, but I am not entirely sure about what that does.

For generating the list with the filenames I used PowerShell:

And for joining them I called ffmpeg (also from PowerShell, but this should work from CMD too.)

This seems to be almost instantaneous, so you don't even really need to count this into your rendering time. It puts the resulting video in the parent directory so it doesn't get mixed into the video parts.
(If you used avi, you only need to change the extension of the output file and this should work.)

I hope that I could help somebody!

Edit 2:
Version v0.4 has been released with the contributions of RedRaptor93.

I wrote a very basic application for the purpose of automating this process, that GitHub user MeTwentyFive very generously took upon and updated, so now it's more convenient and less buggy.

I have the code of that publicly accessible here:
https://github.com/Isti115/BlenderRenderController

I also included an executable in the release of the package, but for that to work you need to have the main blender.exe file accessible from the PATH environmental variable for rendering, and the same thing holds true with ffmpeg.exe for concatenating the parts.

If you need any help modifying, compiling or using it then feel free to message me!

ps.: You can get ffmpeg from here: https://ffmpeg.org/download.html
And I assume that you already have blender, since you are here asking questions about it. ;)

Edit 3:
Mikeycal Meyers wrote his own python script as a cross-platform solution for the problem.
You can find his explanation about it here:
https://youtu.be/rgwP5L1bICk
and the actual project here:
https://github.com/mikeycal/the-video-editors-render-script-for-blender
Make sure to check his work out as well, and help him improve it if you know some python! ;)

One common reason for the sequencer to slow down is editing video at a different resolution, for fast editing make sure the input and output sizes are the same. (even one pixel difference will make a significant slowdown)

Update, Prefetch option has been removed:

Another way to speed up things is by enabling pre-fetch frames: *

This will use multiple threads to evaluate frames in advance.

If you have enough memory you could also increase the cache limit, which is accessed from the same place.

Warning: There is a bug with pre-fetch which is why its disabled by default, any animated sequence strip values (animated opacity for example), won't be correctly taken into account when pre-fetching, however this may not be important in many cases, and crossfades avoid this issue. Just worth noting.

The pre-fetch option was added before Blender's animation system re-write, and the 2 don't work correctly together.

to "GLSL" or "DrawPixels" from "2D Texture" about doubled my VSE render speed.

You can use Pulverize to do multi-process rendering from Blender's Video Sequence Editor:

This will divide the rendering time of your project by the number of CPU cores you have.

For what it is worth I wrote a small addon paraller_render.py (can be found at https://github.com/elmopl/ktba/) that lets you easily select how many instances of Blender in parallel it should launch and into how many parts to split your video.

To install simply download file from addons/parallel_rende.py and put it in your Blender's scripts/addons directory. You should be able to enable it in File -> User Perfernces... -> Addons and search for VSE Parallel Render.

Once enabled you should be able to just press space in sequencer (or anywhere else really) and search for "Parallel Render" action. 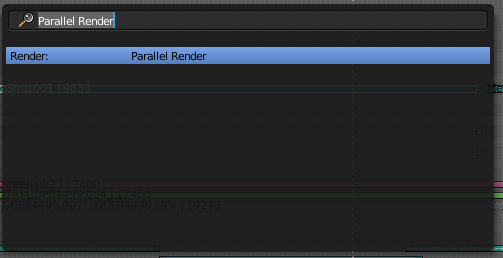 Note: As it launches other instances of Blender and tells them to load the same file it will use last saved version of your file. So if you want your most recent changes to be reflected in those renders just save your file before launching it. 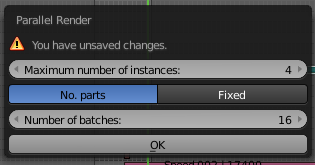 For a solution that doesn't involve code and can be done natively inside Blender (at least, it works inside 2.8X), apparently, when you create a new Blender file, if you choose the "General" option on the splash screen or if you just click out of the splash screen (or have disabled it in your preferences), then video editing will render much slower than if you had clicked the "Video Editing" option in the splash screen. 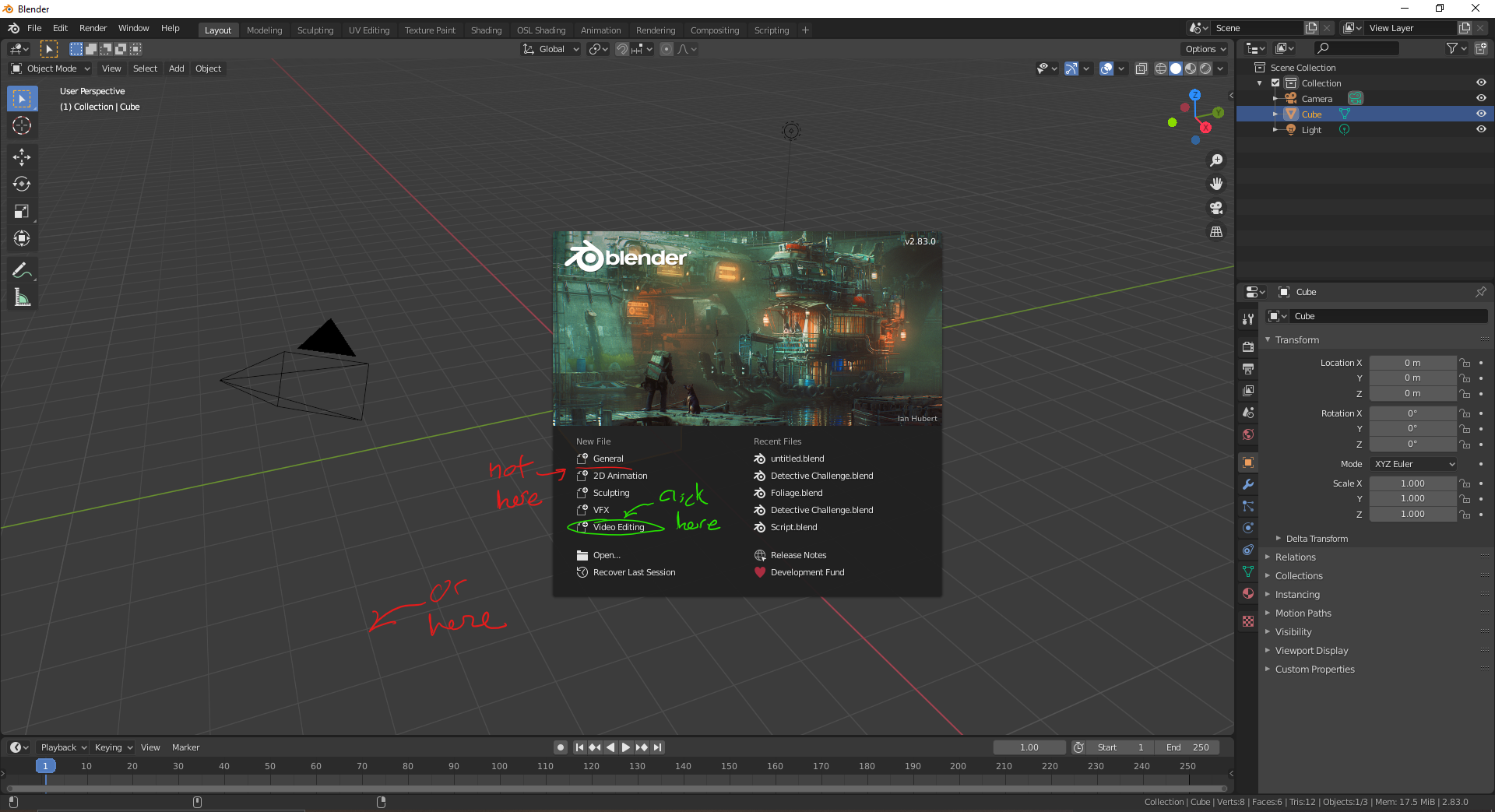 ...or if you've already started

If you've already done a bunch of work editing your video after pressing "General," you can try changing the color management setting I mentioned above from "Filmic" to "Standard." It worked for me in a test run, but not on a different project. But you could try it and see if it works. 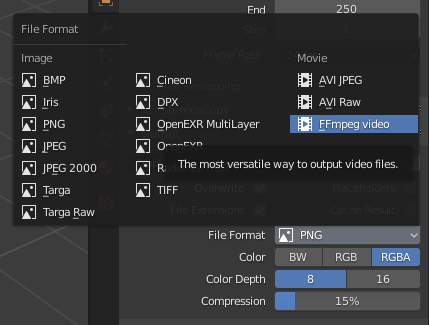 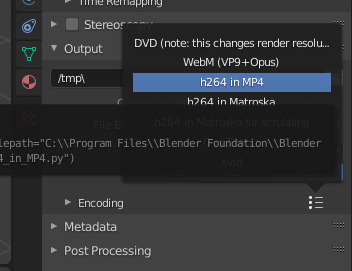 Just remember to expand the "Encoding" section, look under the "Audio" section, and change the "Audio Codec" from "No Audio" to "MP3" or whatever audio format you want to use. 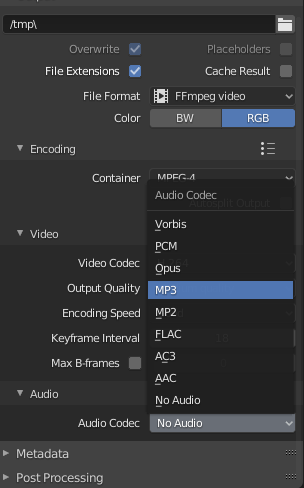 And here are all the settings together in one shot: 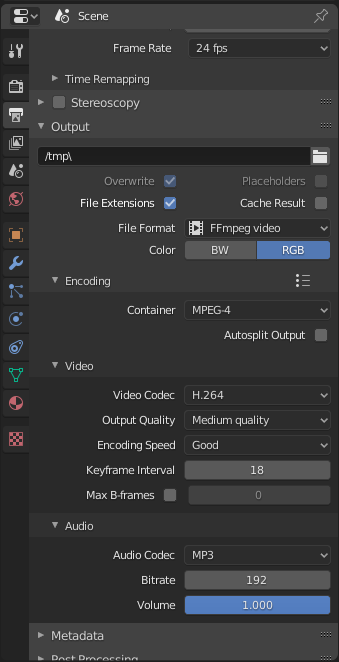 Those settings usually give me approximately realtime rendering for simple video tracts (I think image sequences are actually slower, but I'm not 100% sure). Note that the render preview will skip frames, so it will still look choppy, but if you check the frame number that it's rendering, you should see it skipping along pretty quickly.

Here is a single very scary command line which does incremental, parallel, resumable renders on Linux --- and it ought to work on Windows to if you have Cygwin.

Replace the two numbers after seq with your start and end frames. Replace video.blend with your Blender file. Then run, and... hope...

It'll show you a pretty clunky progress bar on the command line which looks like this:

The 5% tells you where it's got to, the 184:3463 tells you which batch it's reached and how many are left to go (note that frames are processed in batches controlled by the -n argument, and are not the same as frame numbers, increasing -n will make for slightly more efficient renders), the =739s is an estimate of how long there is to go, and be warned that it lies foully, and the rest of the numbers indicate frames it's currently rendering.

If you ^C it in the middle, or it dies with lack of disk space or something, you should be able to resume by adding --resume after the parallel, and it should automatically pick up from where it left off.

Remember to configure for rendering to frames, etc, in the normal way.

Not the answer you're looking for? Browse other questions tagged performance video-sequence-editor or ask your own question.