Why do some faces in Edit mode when I have Faces selected do some of the faces not have black dots? When I try to subdivide those, it doesn't work properly (all that happens is the black dots of neighboring faces move closer to the selected face).

On further investigation, I found that the faces ended up facing inwards instead of outwards. Is there a way of easily fixing that?

Here's what is happening:

The Face dot it drawn at the geometric center of the vertices that make up the face. If you are using Ngons you may not see it actually anywhere inside of the face. 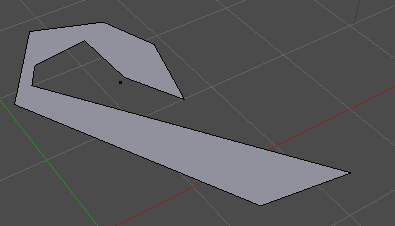 Another possibility is that you face dots are too small. To increase the size you can go to the theme setting in the preferences.

As you can see here the Ngons are not subdividing. 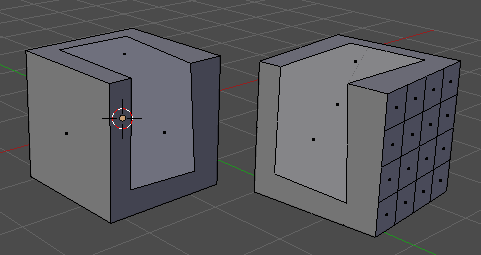 EDIT: To solve backward normals, (in edit mode) select Mesh -> Normals -> Recalculate Outside. This will recalculate all the normals so they point outward, but only works on a fully manifold (completely enclosed) mesh.

EDIT: In your case, it looks like you have some coincident faces (two faces that share some or all of the same surface area), and several n-gons. The part of the leg on the bottom right is probably an n-gon that just doesn't look like it. You may have two vertices very close to each other that look like one vertex, which would mean that this face is attached to 5 verts, when it looks like only 4.

To solve most of these problems, remove doubles. This will combine any vertices that are so close to each other that they look like one vertex.

As for the coincident faces, you'll have to be really scrupulous about finding out exactly which vertices each face is composed of. You can select a face, Delete -> Faces Only and then rebuild the face the way you want it.

Standard polygons have 3 or 4 sides. In some versions of Blender, non-standard polygons (sometimes called n-gons) don't have their centers marked (as with these examples).

N-gons also don't subdivide the same way that other polygons do in Blender. If you subdivide an n-gon, then the new vertices just become part of the perimeter of the n-gon because they n-gon doesn't need to subdivide (and the algorithm doesn't know how to subdivide n-gons). This is why you just see the number of dots around the edge increase.

To solve this problem, you'll want to make the n-gon into a set of standard polygons (3 or 4-sided), which can sometimes be difficult, but is always possible.

I had a similar problem and went for the nitty-gritty solution. I selected the aberrant face in face mode. Pressed X and deleted the face. Then in vertex mode I selected the corners of the face and pressed F to create a new face. The new face subdivided as required.

Not the answer you're looking for? Browse other questions tagged modeling editing faces or ask your own question.

1
Push faces together
1
Mesh faces that are behind other faces appearing in front in game engine
4
What are the faces with dotted patterns on them that seemingly cannot be subdivided
3
How to subdivide a triangle fan (with some of the tris being ngons)?
0
Automated way to make “Select interior faces” ignore select faces that are visible to the camera?
0
vertices are not selected properly, and i cant recalculate normals