How to display progress notifications from an Operator?

I'm writing a Blender add-on that extracts a point cloud from multiple photos. This operation is implemented as an Operator that is invoked from a Panel button. This Operator, once started takes a lot of time to finish.

I would like to inform the user about the progress of the operation, via some kind of status text. What is the best way to script this?

Currently, I have a status message label in the Panel which invokes the "Start SFM" Operator. This displays the text stored in a Scene Property called currentStatus. 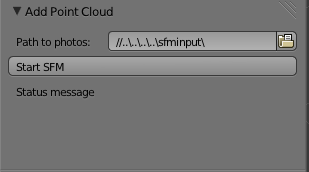 In my Operator's Execute method, I do this:

And in the time-consuming method foo, I update currentStatus:

The problem with this is that the label only updates when it is moused over or if the user clicks on the scene. It does not redraw automatically. I have failed at several attempts to force a redraw through python. I have tried polling, but it behaves similarly.

Am I missing something, or is this a completely wrong way to approach the problem?

This is a hack, at best. So, when an image in blender is rendered, it provides a convenient status bar at the top of the window. The problem is a script has to be a renderEngine to take advantage of this. The solution? Make your script a custom renderEngine, then have your button invoke the render function.

Here's a very basic example of updating the status bar, and adding a status string to the render window. You would put the code you want run in the myCode function.

Then select your new renderEngine. From the top of the blender window click "Blender Render" and select "Progress Bar Example." Now you can run your script by pressing F12. One other method that might be useful is test_break, which checks to see if the render(or script, in this case) has been cancelled.
One last thing to note, directly executing a script (eg. with altP) doesn't display the progress bar, however when the render function (byp.render.render) is bound to a panel it displays correctly.

Not the answer you're looking for? Browse other questions tagged python scripting interface or ask your own question.

22
How to show to the user a progression in a script?
2
How to render with a custom render engine?

4
Display and set internal operator properties from custom Panel UI
3
How do I Download an External File from URL and Display Progress in a Panel without blocking the UI?
3
Update StringProperty on object selection change?
2
Display the Operator properties of an Active Add Primitive operator
2
How to execute an operator from an EnumProperty?
3
How to set operator tooltip from poll()?