I'm trying to create a futuristic missile/rocket seen where a missile is flying with exhaust spewing from it's tail. I thought I figured out how to make a cool looking blue exhaust by using a particle system coupled with a point density -> emission -> volume node setup on a pyramid shaped domain, but I'm having some odd behavior. When the missile is flying straight up it looks great: 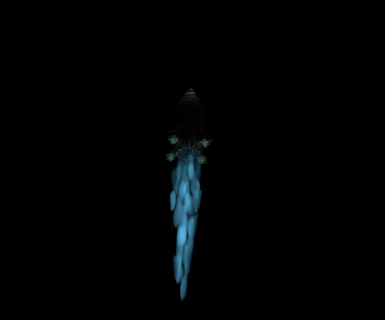 However, when the missile continues to fly and turns to the side this exhaust/particle system setup looks funny.. almost like a cardboard cutout, and only takes up a portion of the needed volume: 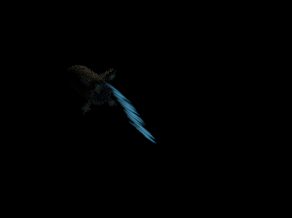 My node setup for this material and particle system is as follows:

Has anyone stumbled across similar issues? I want this exhaust to be full and uniform across the entire domain instead of this half volume weirdness. I have tried increasing the particles and messing around with other particle settings to no avail.

This is most likely a problem with Vector space. From your screenshot you are using 'Object' space but this will move along and distort with the location, rotation, scale of the domain object. As the missile moves and drags the domain (I presume it's parented to the missile) the coordinates will change. To resolve this try changing to World coordinates as shown :

Not the answer you're looking for? Browse other questions tagged cycles-render-engine particles volumetrics or ask your own question.

0
how to simulate a rocket exhaust engine like shown below