I want to make some lights changing colors randomly each frame. They need to be either red, green, blue, or orange. That for about 1000 objects that need to be changing differently. I think it would be some combination with ColorRamp node and a randomly changing factor each frame between 0 and 1. Is this possible? If yes, how? I am using cycles.

Setup a material similar to the following :

The 'Animate' Value should be keyframed to start at 0 and increase to change the colours - the faster this changes, the faster they will animate. The Color Ramp can be adjusted to change the sequence of colors or you could use a different interpolation if you want gradual changes rather than 'Constant'. The Power node uses the 'Random' value to add some variation to the flashing - so that some of the objects change at a different rate. Set the Power to 0 and they should all change at the same rate - or experiment with other Maths nodes to get the desired spread (eg, an 'Add 1.0' node in place of Power would allow you to set the rate to range from 1.0 to 2.0 so you'd never get really slow changing ones).

The "natural way" to do it is to use drivers. But it seems that frame driven values in a material node does not update properly or leads to an error.

So I found this previous answer which mainly links to an external tutorial but leads to a solution.

To do that, we use a script (see below) that allows to use a random function in the driver's expression (see comments).

We'll come back later in the material setting. Here we just want to have a 'value' node so that we can get the previous Python function in the material's nodes.

We can add a driver directly in the node's output slot. He will appear in purple and setting driver's expression is possible. But for some reason it won't work properly and/or refresh at each frame.

So, as indicated in the video accessible from there, we can add it from the outliner.

The noticeable difference is adding the driver directly is a material node based driver but this workaround is an object base driver.

To set it, open the outliner. Set it to 'datablocks' view. Navigate to the following:

Finally, that drives to this: 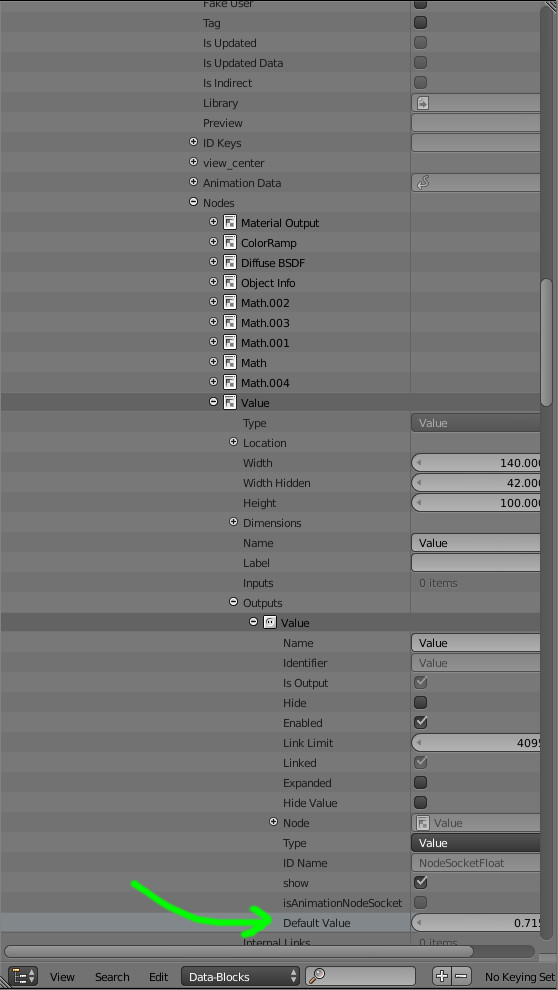 Select this last "default value", then press D or use the menu "edit/add driver to selected". 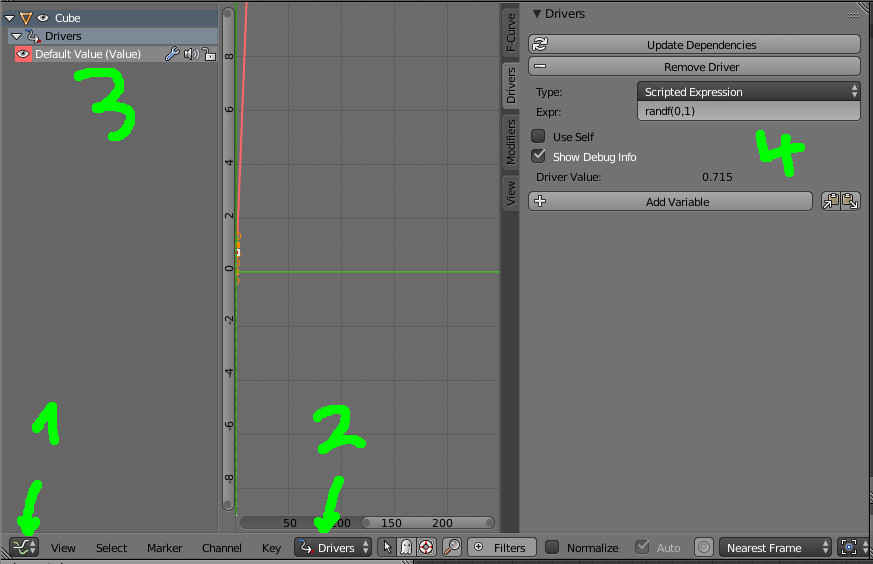 In case of error in the expression:

Now for the material

The material setting has a mix from the driver value (frame based) and "object info" node (object based) as inputs.

The aim is to combine these two random values to influence a color ramp (for instance). A modulo is used to avoid average effect (which may lead to values around 0.5).

Here is the blend file.

To make it work, if needed:

Note: you'll see that this is not perfect as some objects have the same color, always... I think this is due to the "object info" node, but I don't know why...

1
Change the material (color) every frame in Python
5
Is there a caveat to using drivers on node properties?
0
Problem with Material drivers for nodes properties

4
Changing Materials On Multiple Copies Of Same Object (within cycles)
10
Creating knob/dial with indicator strip
0
RGB lighting on a wireframe in Cycles
1
Cycles Shader to assigns a color based on how many light sources hit the surface
5
How can I simulate metamerism in Cycles?
8
Procedural random/different colors based on normal direction
2
how to modify / customize a coloramp?
3
What kind of illumination to use to produce these 3D ball-and-stick atomic structure models? (specular reflection but no shadows)