Merging vertices at the center point when using a mirror modifier?

When modeling a 3d image using a set of 2d reference images, I use the mirror modifier to speed up modeling. When I work from the center to the outside edge, I'm fine. When I work from the outside edge to the center, I either end up with a small gap right at the threshold of the mirror edge or I end up extruding the vertices until they overlap. I can't join or merge the vertices because while I'm using the mirror modifier, I can only select vertices on one side. Any help would be much appreciated.

On the modifier properties there is a checkbox called Clipping (shown as 1 in the image bellow), it will merge the vertex as it touch the edge (prevent vertices from going through the mirror during transform).

Note: If you're not seeing the vertex because it's hidden by faces and you can't select it, you can turn off the modifier visualization (the eye icon button from 2 in the image bellow), there's also a button with the "triangle vertex" that allow you edit from the reflection too. Also, at the bottom of 3D view in the vertex selection options, there is a button with a "wire cube" that allow you to see and edit vertex though the faces. 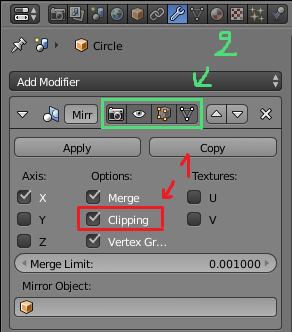 Not the answer you're looking for? Browse other questions tagged mesh mirror or ask your own question.

9
Mirror modifier without seam
3
How do I avoid gaps to a mirror modifier when I am scaling a model vertices?
1
How to connect the vertices of two separate objects?
0
Unmerge Vertex with Mirror Modifier On (Make Two Vertices from One at the Center?)
0
Problems with the Mirror modifier
0
Understanding mirror modifier