I'm trying to animate a superhero zap into his super suit. I have two separate characters, the identity, and the superhero.

I want the costume of the superhero to crawl up the legs of the identity but I cant figure out a good way to do this in blender.

If you can find anything on the internet that may help me with something like this, please show me because I cannot find anything related to this.

I need it to look a little like Iron Man mixed with Miraculous Ladybug.

Concept art related to what I'm looking for... 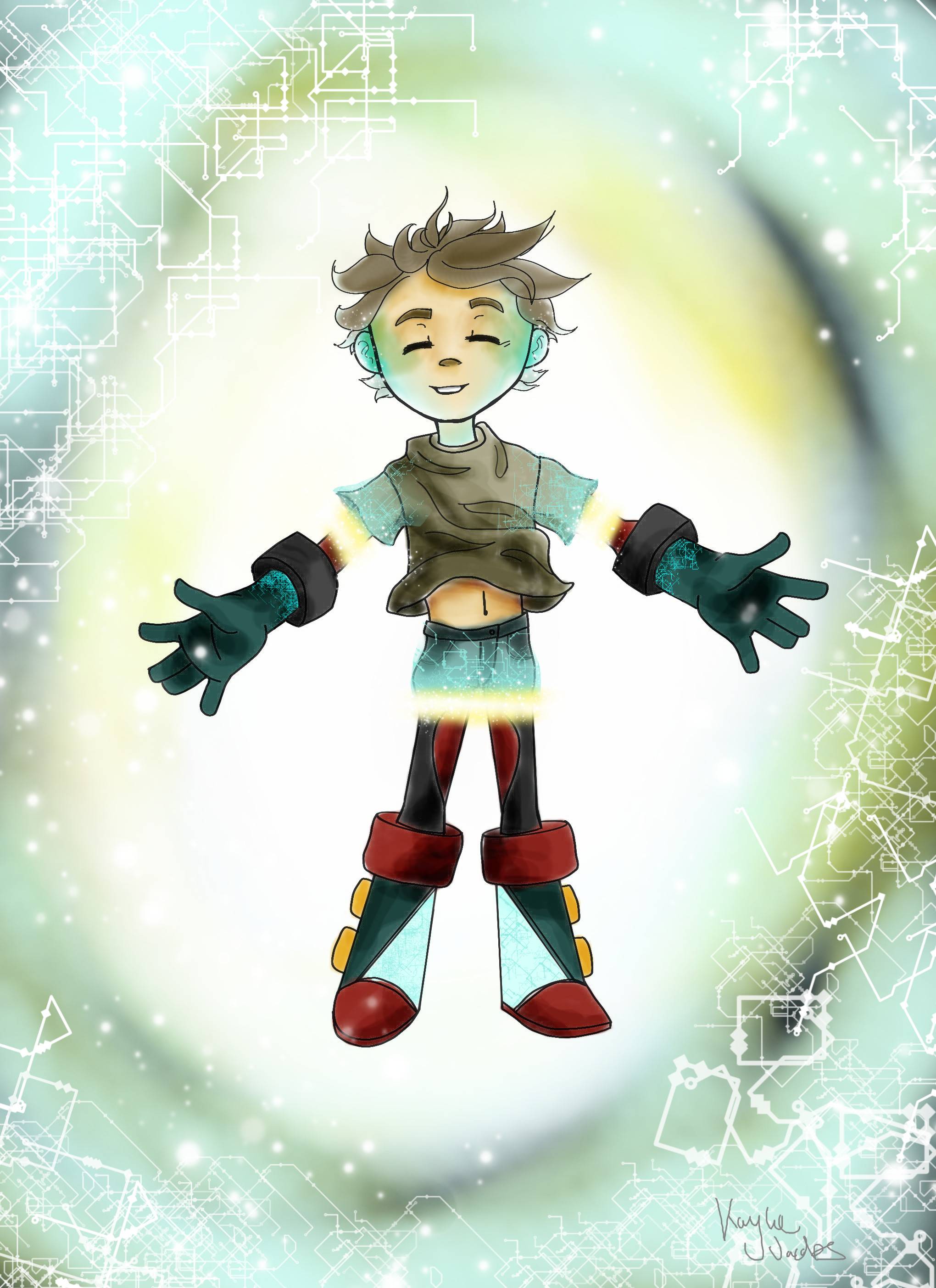 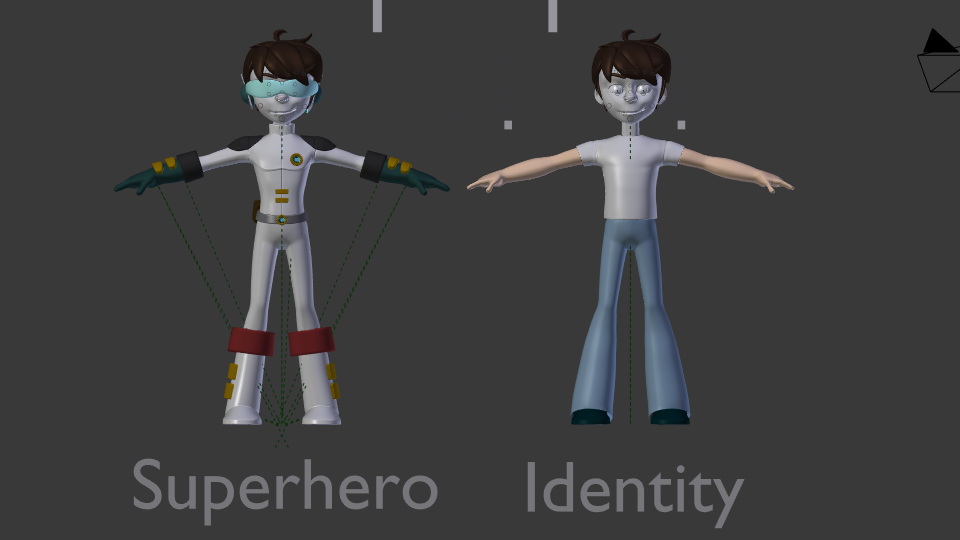 I imagine something akin to this might be what you're after. Much more in the way the sparkles are formed and travel, plus more mesh building, e.g. to form a pair of large boots from the ground up, could be added to enhance the overall effect.

Combining this with @Wossname's answer would enhance things also.

The main objective of this answer however, that of re-clothing your character from the feet up, is to demonstrate another relatively simple method of achieving this in Blender.

The exercise is performed in Blender's 3D Window, (stage) using a 3D model. You can use the same technique just as well with flat 2D drawings instead. (textured 2D planes)

The model (or drawing) of the character in normal clothing is in layer one. The zap-dressed model/drawing in layer two.

The secret is to have both models/drawings with EXACTLY the same dimensions so no change apart from the clothing would be noticable.

Blender will do this by duplicating layer 1's model, and moving the copy to layer 2.

The duplicate would then be allotted it's own exclusive material slots which would be textured this time with the hero's costume. Additional mesh for the boots & gloves would be added in this layer also.

In the case of 2D drawings, the first drawing plane would be duplicated in layer 2, so you'd need to retexture that with a modified drawing showing our hero with new clothing.

To keep both drawn characters at exactly the same dimensions, both would probably need to be produced in the same application that drew it in the first place.

i.e. Create a second drawing layer by duplicating the first, then repainting the clothing onto the copied drawing.

You would have two drawings, one in each layer.

Export both as separate image files with which to texture the two 2D planes in Blender.

Now for the zap!

Both layers would be included in the final render but layer 2's model or drawing wouldn't be visible initially.

An 'inviso' mask is used to do this in the second layer.

When the mask is slid upwards in the z axis, it would progressively unmask (reveal) the new clothing.

Both masks rise together and at the same speed to -

a) From the feet up, progressively render as invisible, the normally dressed character.

b) From the feet up, progressively reveal the zap dressed character.

Once the first model is hidden it can be instantly disposed of.

Animating limbs during this process is no problem because when duplicating, the copy inherits the original's keyframes. Synchronization is automatic -

Layer one's mask is positioned so it's top edge just overlaps Layer 2's mask lower edge so there would be no gap.

Sparkles (particles) could be added where the two planes meet. This one is parented to the Layer 2's Inviso. As it rises the view alignment changes so keyframed adjustments to the sparkle emitter's Z axis "location" will be necessary to correct this.

Alpha layering the final clip is also handy for making promos/demos. Inviso masks work just as well with this process.

Note how once alpha layered, our char can be sparkling into his uniform whilst placed 'physically' within this jpeg image, using (again) inviso masks, one for the chair, the other for the table to mask the shadow. 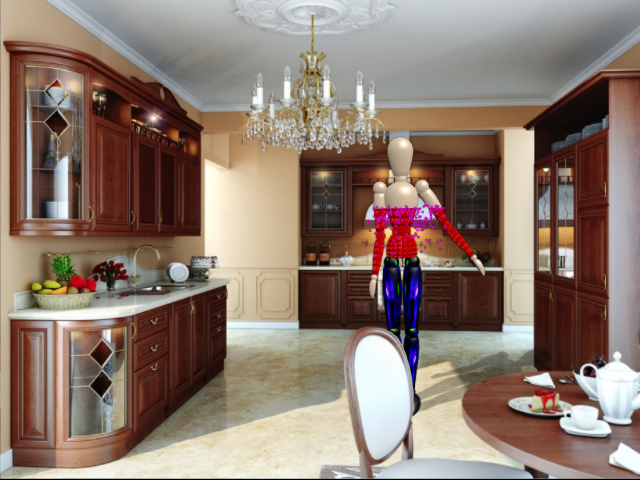 For details on how to create these, click here - How to put a mask into 3d space

NOTE: Inviso's will only work when rendering using "OpenGL". (Top left of window under "Render") PLUS everything must be deselected. i.e. Press 'A' before viewing or rendering. Also select "Only Render" in the 3D windows properties panel-->Display. (Press N)

A Blend file for this answer isn't possible in it's present form for reasons of copyright, (The 3D model)

The char has been replaced with a cube etc. To view it properly switch to the CAMERA VIEW. You can download the modified Blend file here -

For one quick and easy way to achieve this effect, take a look at the Build Modifier

The Build Modifier causes the faces of the mesh object to appear or disappear one after the other over time.

Using dynamic paint, we can obtain this kind of things:

The principle is to set both character as DP canvas, use some objects as DP brushes and move these objects to progressively cover them.

Then you bake (in DP bake part) to obtain an image sequence which is colored where the objects have moved and alpha for the other parts (it uses the characters UV maps to do it).

From that, you can use the image sequence as input for a mix shader to drive between the characters original shaders and transparency (that's the bad point: characters materials need to be changed).

If the characters overlap too much, there will be z fighting (see here). But there is a workaround: rendering the characters in 2 render layers and use the compositor to mix them again using a "z combine node" (I did not used that in the first gif above and some z conflicts are visible).

Here is the brushes animation:

The shader output: the image below show the one which is transparent first. For the other one, invert the shaders in the mix node. 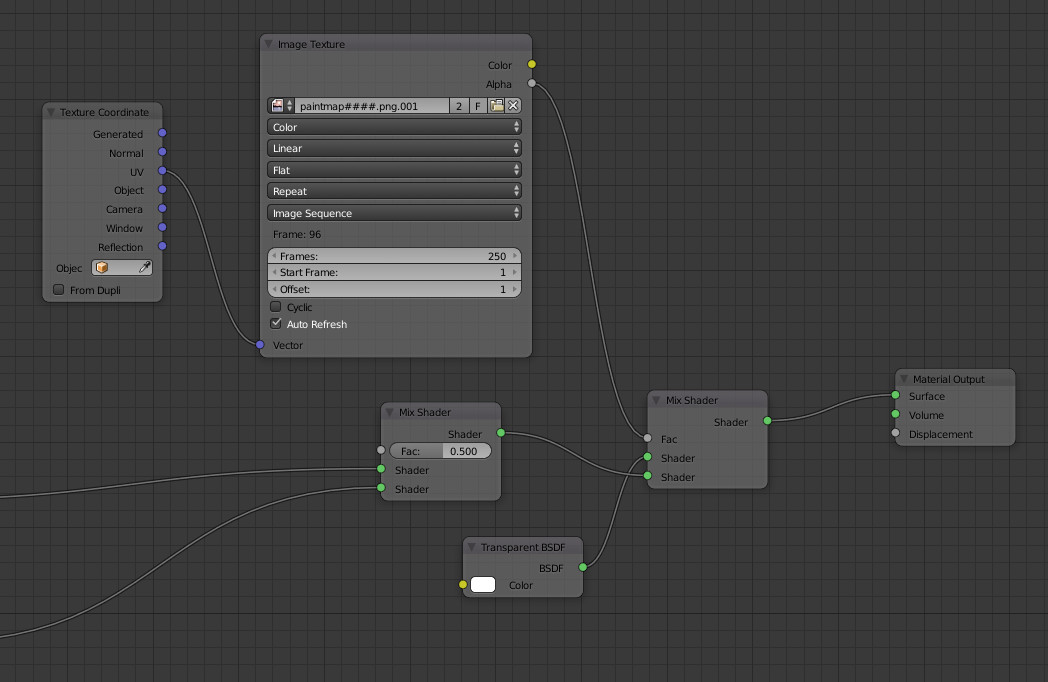 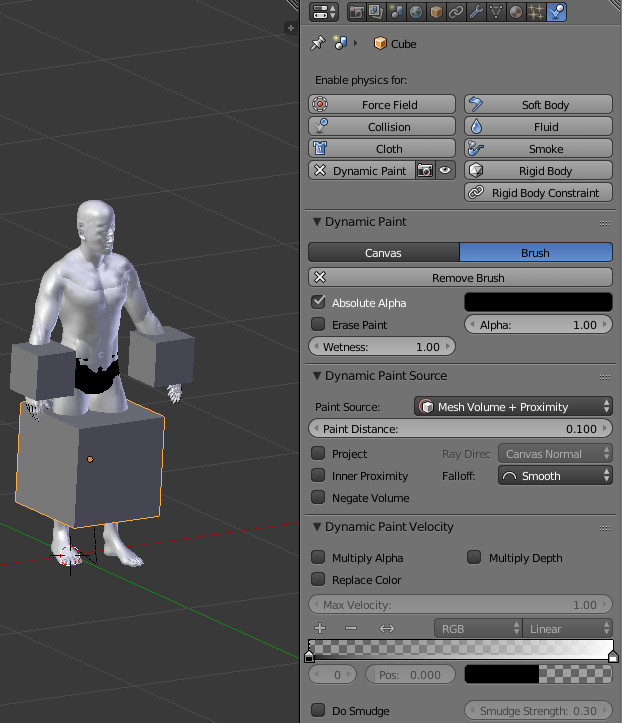 DP canvas: the paint is on an image sequence (the one used in the material node). Assign a directory per character to bake to and use the bake button. 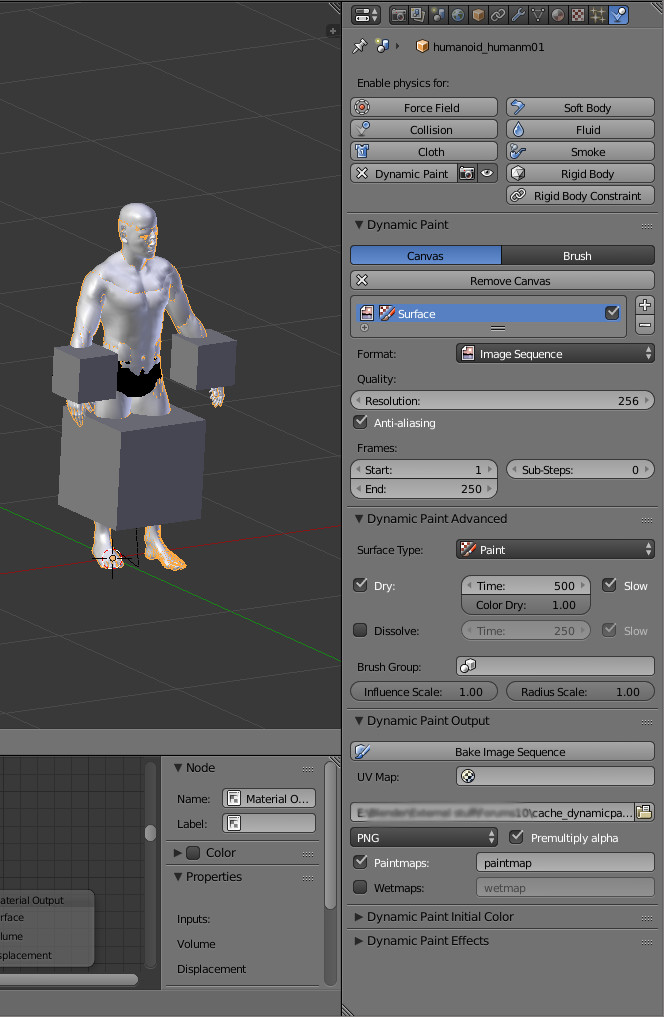 Result of the bake: one image per frame progressively covering the UV map 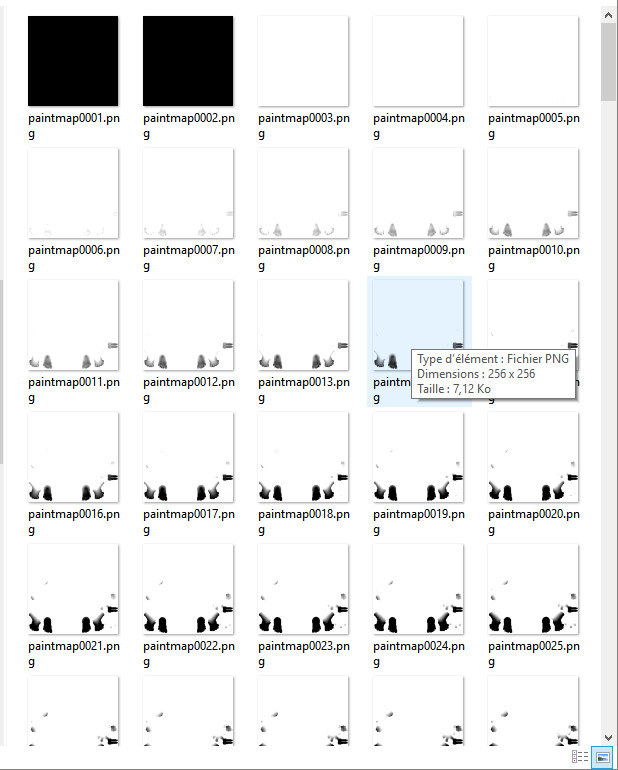 If you have z conflicts: use two layers to render. The setup for the scene. The render uses two layers and each character has to be in its separated layers:

...so that you can use the layer Z information in the compositor. Here is the principle using two cubes instead of the characters 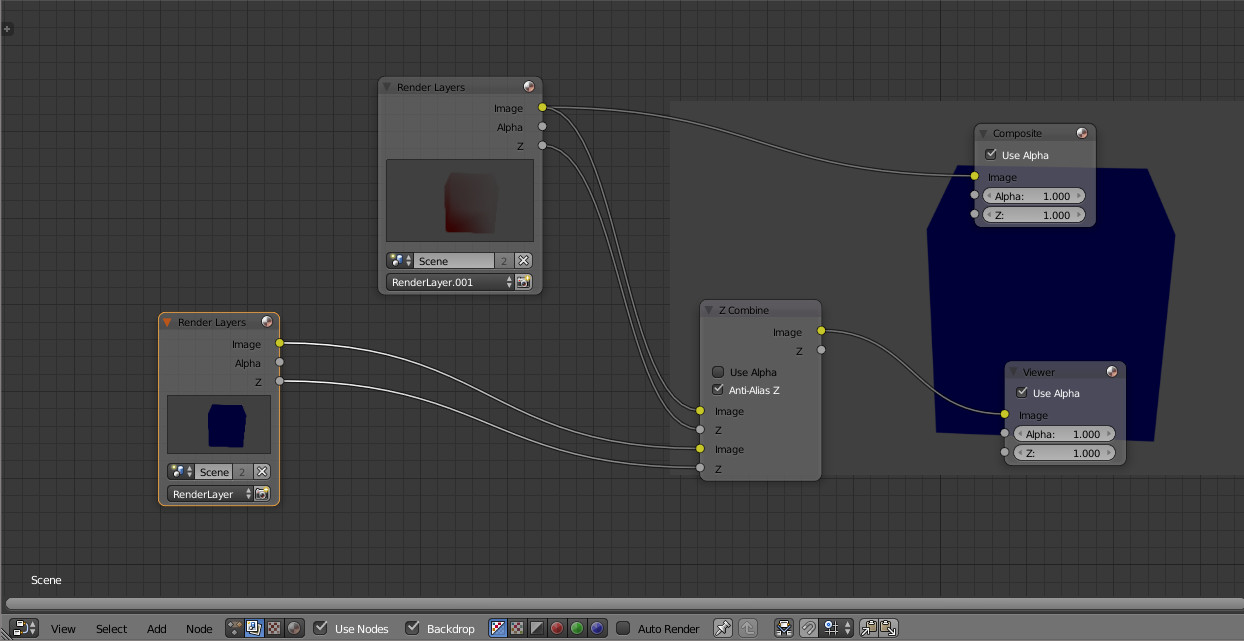 I have, in testing some of the answers above, discovered an interesting solution as well, inspired by @Edgel3D's answer and blend file, I came up with a setup like this... 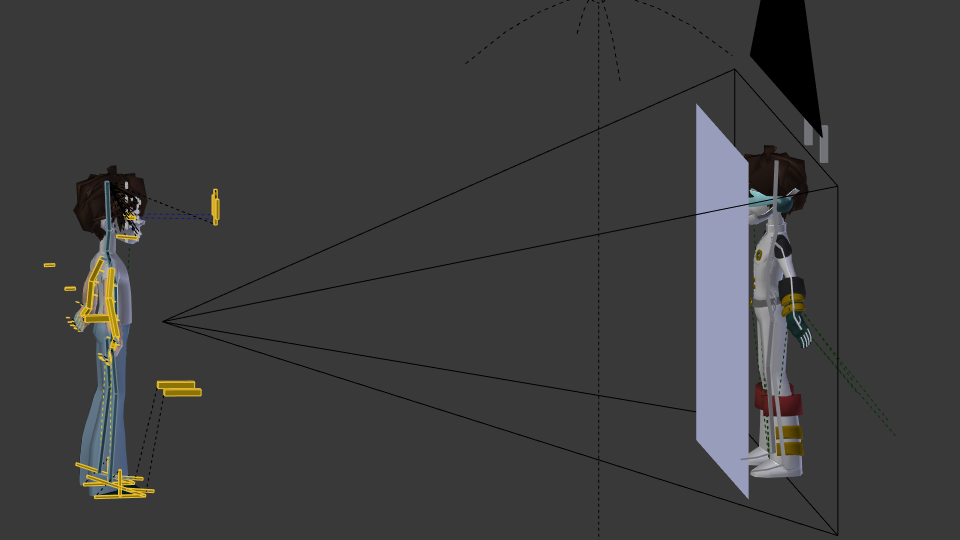 In the image above the characters are set in the exact position on the X axis but the identity is placed behind the camera and then rotated on the Z axis 180 degrees to face the plane. I had to mirror the hair of my identity character to have its waves on the same side as the character's standing behind the plane so they look identical. ([CTRL+M] to mirror to other side.) 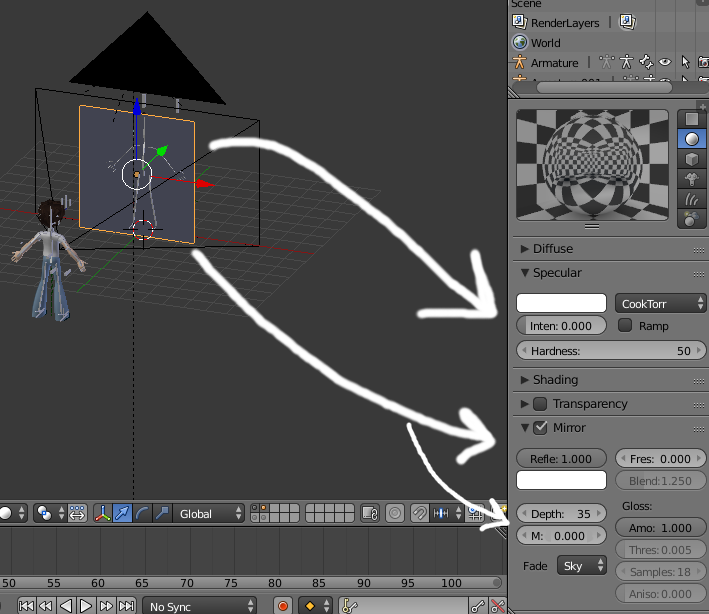 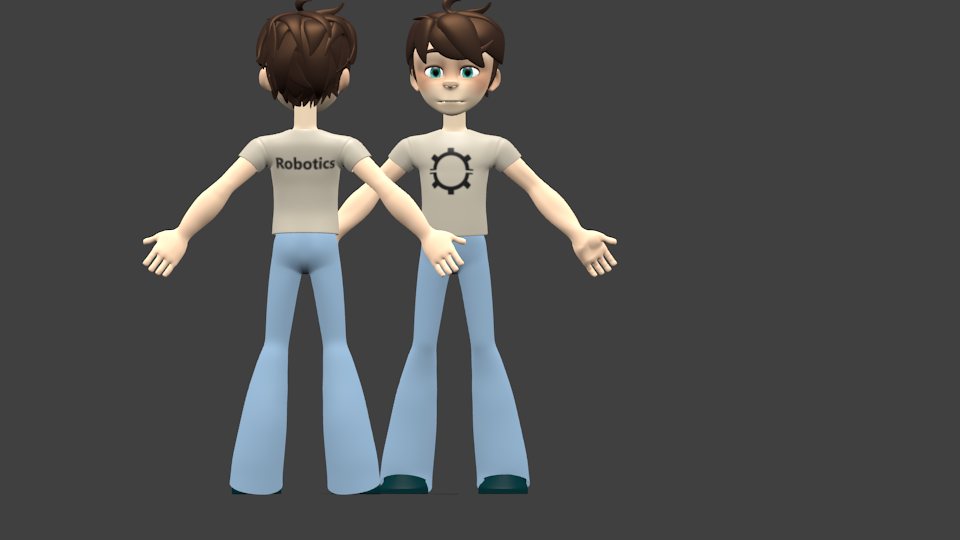 In messing with this particular setup I came up with an identical product as @Edgel3D had done.

To make this setup more elaborate you can add particles to it or the Build Modifier as seen in @Wossname's answer to the plane to create some interesting effects.

1
How to put a mask into 3d space
3
Paint over Render in compositor
1
How to create "masking effect" with which parts of object gradually show until it's fully visible?
1
How to make a nanotech effect?
1
How to solve z fighting and transparency? (Cycles)