How can I make a sound wave effect on a "wall" of cubes through animation nodes?

I want to make an effect of a wall of hexagons (just cubes) move in and out at different points simultaneously, almost like if it had an ocean modifier, or could textrue displacement on a plane, but i want the objects to be individual. doing this with the particle system can be annoying at times to where i have not gotten an acceptable result. I saw a demo on youtube where someone used a random object to push on the cubes with a proximity node in the animation nodes part of blender. I just downloaded animation nodes recently and the nodes he used are no longer in the animation tree, probably because it's been 2 years since the video was made. anyone know how to create the proximity effect with the (2017) current animation node set up?

Without using animation nodes you can create a subdivided plane and make it the parent of a cube, then enable dupliverts on the plane to have an instance of the cube at each vertex. As you deform the plane the duplicates will move with each vertex.

To your question of using animation nodes - A Grid Mesh node will give you an array of vertices that you can use for the location of duplicates, while an Object Instancer node will make the duplicates, then use a subprogram to adjust each duplicate. You create a subprogram to be able to repeat a node setup for each item in a list.

Now that you have the duplicates in place you connect in other nodes to alter the location. In this example I use separate and combine vector nodes and add in a number wiggle to alter the z location. 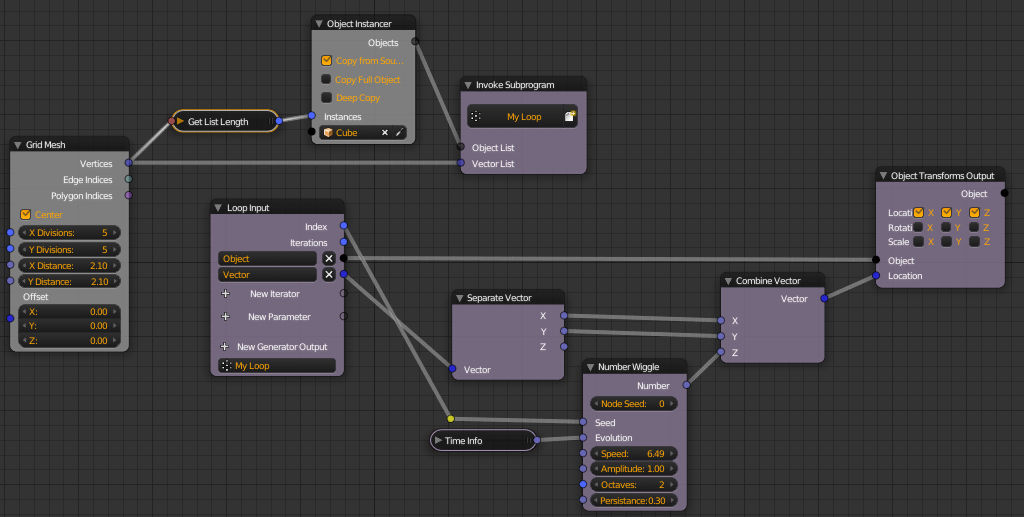 Zach Hixson has recently started a tutorial series for animation nodes, you may want to have a look at his playlist

Sambler's answer works well and is quickly to execute. Here is a slighty different