Been working with Blender for about 2+ weeks.

I know this sort of question has been asked a lot but I've been struggling for a week now, trying different things to the point where I don't know what I'm doing anymore.

What I want to do is make the skirt collide with the body. Collide and move around the body like how a flag would ripple in the wind if that makes sense to you. A natural movement basically.

I have an armature for the body. A "cage" for the skirt + mesh deform modifier for the skirt. It sways naturally, but that's it. The skirt has automatic weights, by the way. That's why it stretches like so when the foot is lifted (see the screen at the bottom).

I've been trying to follow some tutorial series - Complete Character Rigging Guide (w/ Hair Physics) - Blender Tutorial (by Daniel Kreuter) but it gets too complicated with duplicate armatures and stuff...

I also saw this video:

I can do the first and last method but I don't understand the second. Not even sure if it would allow me to get that natural flow I'm after.

So, what would be a good approach?

I plan on using all this for a game eventually, I hope. 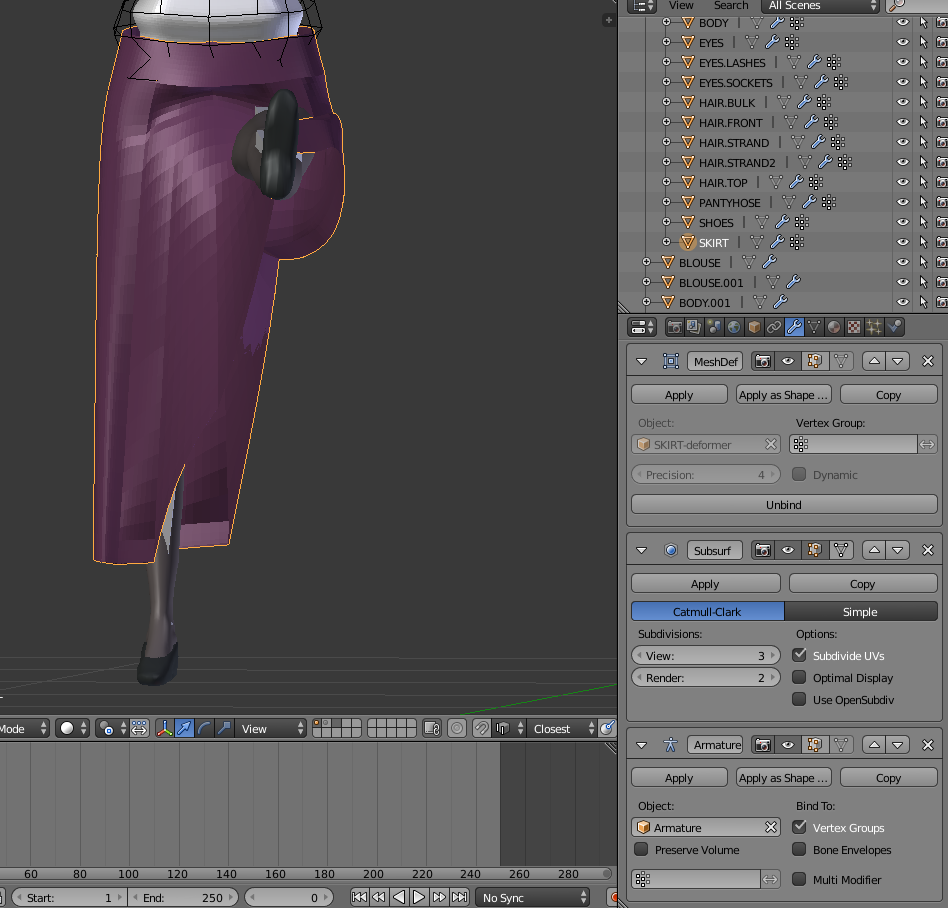 Quick note: I can make swinging polygons with armature and empties. Now I have to figure out how to bind this to a mesh. It has to do something with vertex groups.

I don't think the armature and empties will help with achieving natural skirt flow. So I did something else. I moved the armature modifiers on top. Cloth simulation - last. It's a bit better but still not good enough. Have a look:

I've added some polygons on the legs (visible on the right leg), attached them to the corresponding bones and added collision (with default settings). Why? For faster and easier collision detection. The body has a lot of vertices and lags when testing.

The skirt-deformer is a low-poly mesh which is parented to the armature. The skirt is outside the rig with mesh deform bind to the skirt-deformer. skirt-deformer has cloth simulation so that when it moves, the skirt inside it moves. But something gets messed up. And there's still clipping.

The animation is wonky, still getting the hang of it. But still. All this works and is easy. Something with the other file is messed up. Perhaps it's that this skirt has a top cover while the other skirt has a cut out top? My guess is that there's something wrong with the mesh. I'll have to check.

I removed the mesh deformer, tweaked cloth simulation values, did some testing and the final result is rather pleasing. I realized I had to run the simulation first, so that when the cloth starts to "sit in" I can move the legs and the collision occurs. I was expecting all this without the simulation running. Just in Pose or Object mode.