I have an object that emits light and I would like to apply the in-build modifier for a sine curve to create blinking lights in my object. However I can't figure out a way to not just work with the primary 3 colours (RBG) but a mix of those to create a unique shade. (I worked based on this tutorial: https://www.youtube.com/watch?v=FXaoXcJJquo) When I replace the keyframe with my chosen colourshade and then apply the modifier it does it automatically on red (first in list). Since the other 2 colours have their values but not the sine curve, my object blinks in different shades. If I then apply the same modifier settings to the other 2 colours, it goes through the blinking but only in grey/white and black. is there a way to join the colours or fix them somehow to then apply the sine curve modifier? or any other suggestions how I can let the object emit light once and then stay on (blink once)? but I'd like it to emit slowly and not like an on-switch. Thank you for any help!

In the additive RGB color model you create different colors by adding different intensities of the primary colors red, green and blue together.

However, if you also change the ratio of the primary colors then you will end up with different hues.

Let's say you want to create an LED which blinks by cycling from black to some bright orange tone and back to black. For the color orange let's use the RGB ratio of 2:1:0 [1]. This means you need no blue and twice as much red as you have green. If you use sine wave modifiers you have to set amplitude and value offset accordingly.

When the ratio of the primary colors is changed, e.g. by using a different phase offset for each primary color, you'll receive a LED which cycles between different hues.

Edit:
In situations in which you're only interested in single color LEDs, LEDs which cycle between two colors or LEDs which cycle in a set of predefined colors it's worth to consider animating the Emission Strength, the Mix Factor of a MixRGB node and/or the Factor of a ColorRamp node instead of working with three modifiers for the RGB components. This will minimize the work should you later decide to change the color of your LED. 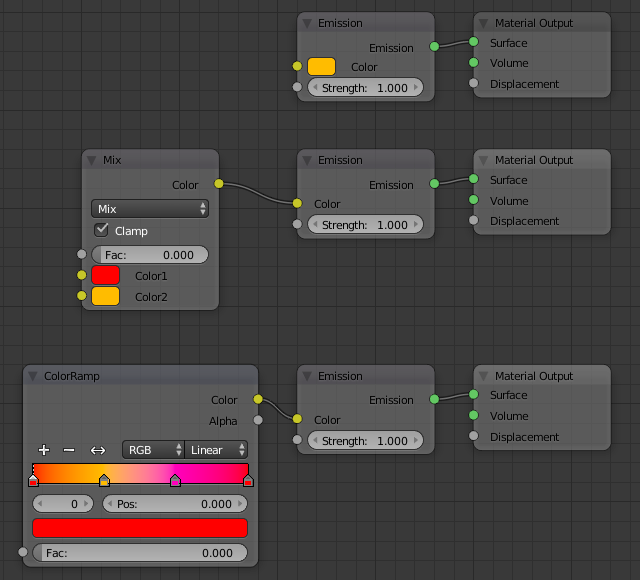 Not the answer you're looking for? Browse other questions tagged cycles-render-engine materials light keyframes color or ask your own question.

0
How do I make an array of objects light up sequentially?

8
Material that emits light, but appears diffuse?
8
Cycles Emit Light from area on Texture
3
Gradient glowing object - how to?
15
Correct vector input to map texture light in Cycles
3
Animating materials for blinking effect
1
Can you make a texture glow without it emitting light?
0
Why does Emission shader dilute colors? EEVEE
0
Eevee disable receiving light for an object